As part of the 100th anniversary of the Battle of Passchendaele (also known as the Third Battle of Ypres), The Royal British Legion (RBL) has launched a campaign to generate income to help support all members of the British Armed Forces, veterans and their families. “Every Pin Tells a Tale” has been created by Geometry Global UK and runs nationally. The integrated campaign includes print, digital and social marketing. To commemorate the brave men who fought and lost their lives at Passchendaele, The Legion has created a limited-edition of brass poppy pins in association with TMB Art Metal. 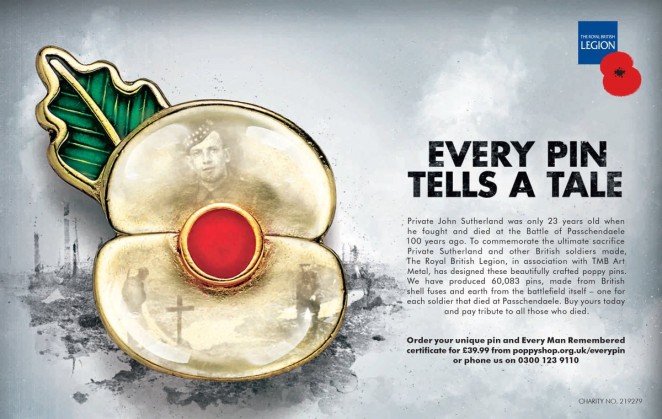 Each pin is made from British artillery shell fuses found on the battlefield site, and contains earth recovered from the fields. Every pin commemorates the life of each of the 60,083 British soldiers who fell at the Battle of Passchendaele - helping their story live on.  The evocative imagery reflected in the pin tells the story of John Sutherland, who was merely 23 when he fought and died in the battle, just one of the 60,083 stories that each pin remembers. Passchendaele began in July 1917 and was blighted by some of the heaviest rains that region of Belgium had ever seen, drenching the soldiers and turning the ground into a swamp. The ensuing quagmire saw more than half a million Allied and German troops killed, wounded or lost, and remains one of the most notorious battles of the First World War.

Karl Turley, Business Director at Geometry Global UK, said of the campaign: “The Royal British Legion and Geometry wanted to create an emotionally shared experience that helps more people to act and support the Legion’s extraordinary work.” John Norton, Head of Retail Trading at The Royal British Legion, added: “Geometry Global continues to help the Legion tell incredible human stories, with insights that connect and inspire people to own a piece of First World War history from the Battle of Passchendaele. The income raised will help the Legion provide lifelong support for the Armed Forces community - serving men and women, veterans, and their families all year round.” 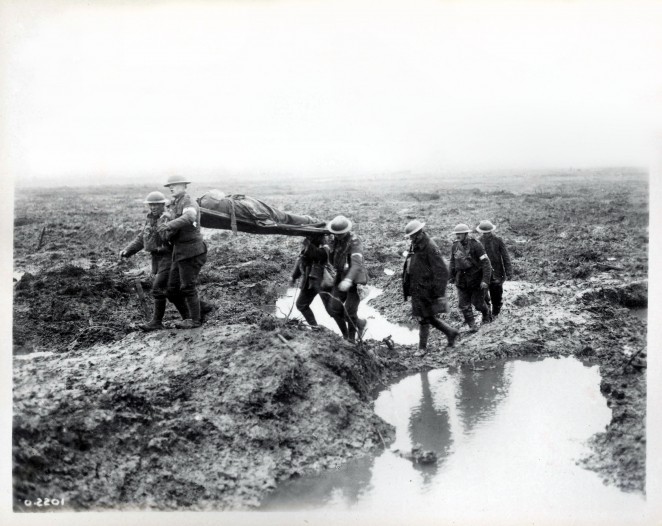 The campaign is part of Geometry UK’s continuing partnership with The RBL, created to inspire behavioural change and encourage people to see and donate to the Legion beyond Remembrance.  In 2016, the campaign helped The RBL land the 2016 Enterprise Award at the Third Sector Awards – recognising innovation and effectiveness in commercial success. The campaign also follows the release of six VR films last week by the RBL, which were released to mark the anniversary of the battle. The immersive content, which is compatible with most major VR headsets, is aimed primarily at younger users, but during the launch, army veterans Bill ‘Spud’ Hunt (83) and John Kidman (87) wore VR headsets to explore life on the front line in 1917. Besides the immersive, 360 degree views of the battlefield, the experience also offers first-hand audio accounts, diary excerpts, archive film and photos give viewers a unique glimpse into that world. In particularly moving scenes, viewers are even able to experience the moment when troops go over the top of the trenches to advance on enemy lines. Historians hope the films, which were created in partnership with television presenter Dan Snow, who presents the content, which can be experienced here, will serve as reminder to the public of the sacrifices made by the brave soldiers.

Finally, Ogilvy & Mather, alongside VISITFLANDERS, Ogilvy & Social.Lab Belgium and Westminster City Council celebrated the centenary with the unveiling of "The Mud Soldier." Crafted with sand mixed with mud from Passchendaele, Flanders Fields, Belgium, the temporary sculpture (below) was displayed on the North Terrace of London’s Trafalgar Square for just four days, with The Mud Soldier slowly dissolving as it was exposed to the rain. The young artist behind the work, Damian van der Velden, is a graduate of the Royal Academy of Arts of The Hague. Having trained as a professional painter she works in various disciplines with her work being exhibited in Belgium as well as in other European cities. She explains, “I was trying to get the emotional or exhausting feeling that the soldier has to have at that moment.” 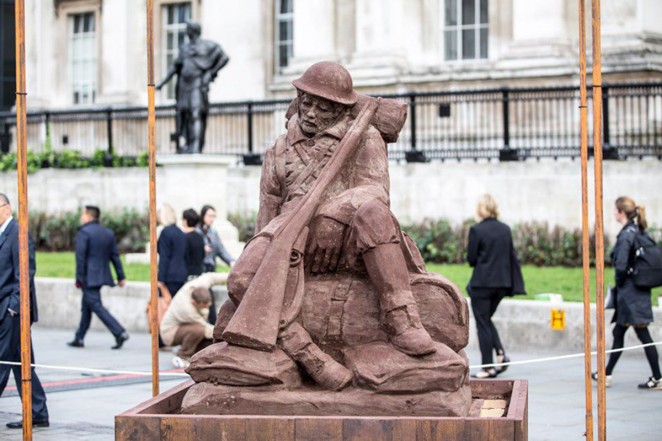