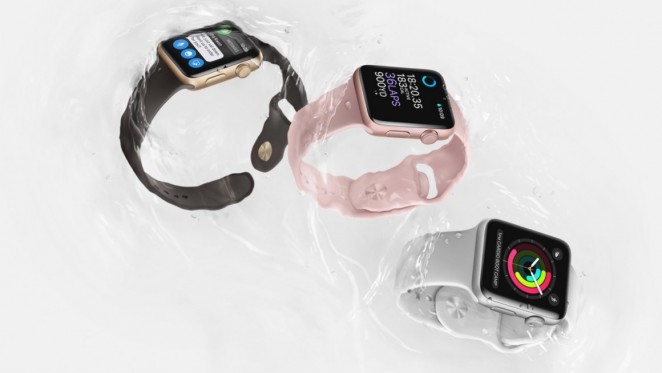 OK, the recent Apple keynote was MAINLY about the iPhone 7, but CEO Tim Cook also used the event to announce a few new interesting developments, chief amongst which was the new Apple Watch, tentatively called the “Apple Watch Series 2.” The new watch will come in two iterations, with one completely reengineered to provide optimum support for swimmers thanks to a new series of seals and adhesives, which mean it can be worn comfortably at depths of up to 50 metres. Both models have some pretty serious waterproofing technology. The most significant change to the design is the speaker, which has been configured to eject any water that enters. The "swim-proof" model, meanwhile, has been tested with machines to prove it can withstand constant use in the pool or sea. Algorithms have been also developed to accurately calculate calories burned while swimming, based on an individual's stroke style. The Apple Watch Series 2 will be available to pre-order from 9 September 2016. Prices will start from $369. The original Apple Watch, now called Series 1, will come with the same dual-core processor for $269.

The other big reveal was the controversial wireless headphones, but the less said about them the better. In fact, many have accused the tech giants of losing their touch, with these new devices revealing few, if any of the ground-breaking, one-of-a-kind ideas the company has built its brand on. There's surely something to be said for a steady, reliable upgrade of course, but we're talking about Apple here, and people simply expect more. In other Apple news, an unofficial drone video (above) filming the construction of the new Foster + Partners designed Apple headquarters in California was released this week by Matthew Roberts, showing the vast campus beginning to take shape.

“We believe in a wireless future, a future where all of our devices intuitively connect” 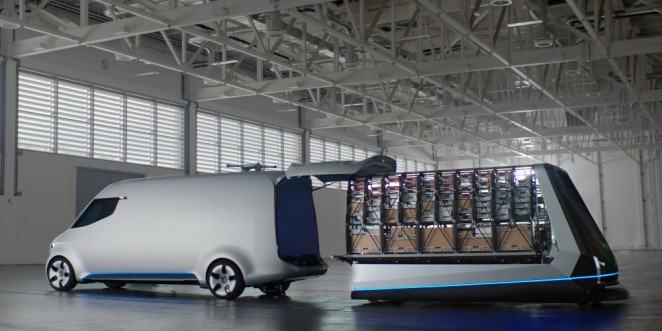 It might look like something you'd expect to find Inspector Gadget driving around in (top marks if you got that outdated reference), but the Vision Van from Mercedes-Benz could, according to the car manufacturer, revolutionise the concept of home delivery in the coming years. The electric delivery van includes fully automated cargo loading and a launch pad for drones, which are able to drop off packages during the final stage of the delivery process. The addition of drones will apparently boost delivery times by up to 50% on the last mile. For instance, if the van stops in a residential area, it will be able to deliver multiple packages to nearby homes autonomously by air as well as by hand. Mercedes is also incorporating smart technologies into the van, such a telematics unit which collects and processes data about the package delivery status. There's no word yet on if and when it will be hitting the roads. 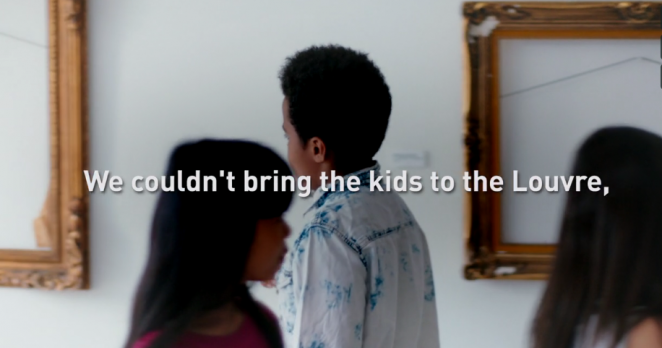 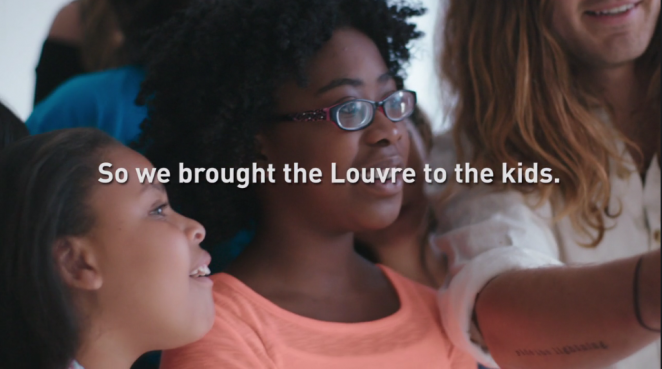 BULLITT director Matt Ogens and HuffPost RYOT, the Huffington Post's dedicated VR website, have united to document a unique journey that takes a group of fifth grade students to the Louvre Museum in Paris without leaving Los Angeles. HuffPost RYOT used augmented reality technology to bring the Louvre directly to the young children, demonstrating that art and technology have no boundaries. The film, directed by Ogens, shows just how easy it is to take these students on a true journey transcending space and geography through immersive technology Ogens has collaborated with HuffPost RYOT CEO & Co-Founder Bryn Mooser on several projects including a 12-part branded content series for Land Rover; a virtual reality documentary for the Associated Press which played at the 2016 Cannes Film Festival; a virtual reality promo for Ben Affleck and Matt Damon’s series “The Runner” on Verizon’s Go90 network; and a series of films about Cancer research for Sean Parker (Napster, Facebook).

Ogens, who collaborated with talent sourced from his advertising-driven collaborations to help bring the short doc to life, said of the La Louvre work: “I was immediately drawn to RYOT’s mission of delivering socially conscious news with a call to action. And once they began creating original immersive content, it fit in my wheelhouse perfectly. To witness the moment that technology opens doors and changes lives, and to document that process for others to see, is incredible.” Huffington Post RYOT CMO Molly DeWolf Swenson, added: “With the popularity of Pokemon Go and interest from platforms like Snapchat, augmented reality has certainly had its first mainstream moments, but the goal for us is to figure out how to use it to drive education and social movements. Matt has been a long-time friend and incredibly supportive of RYOT’s mission; he’s so talented and has helped elevate our work.”

“To witness the moment that technology opens doors and changes lives, and to document that process for others to see, is incredible” 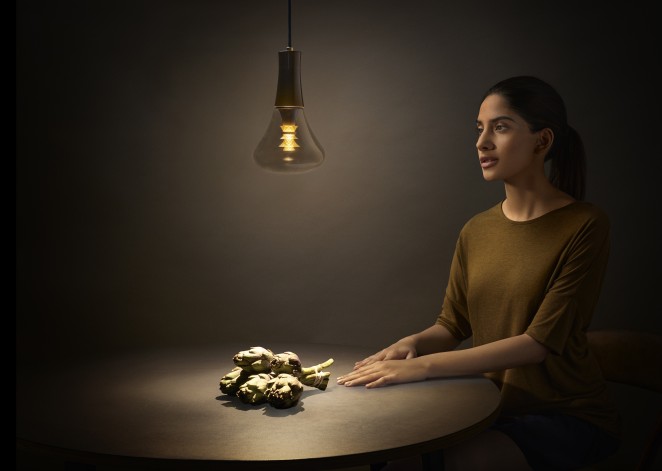 The energy efficient lighting experts at Plumen have revealed a new energy saving LED light bulb, which aims to be as beautiful as it is efficient. The Plumen 003 has been designed by the Hulger design consultancy in collaboration with Claire Norcross and Marie-Laure Giroux, and took five years to develop. The new bulb has two functions: It gives off a downward spotlight to illuminate specific tasks and a soft ambient light, which is achieved through a gold element in the centre of the light bulb. This is the real selling point, as this light has actually been designed to make people “Look more beautiful.” The gold element in the middle of the bulb has been engineered to diffuse and reflect the light, which reduces glare, and provides a softer light on side views with a more direct light below. In other words, it's incredibly flattering. The design of the bulb was inspired by Danish designer Poul Henningsen’s PH lamp, which was designed in 1925 as a softer alternative to the classic Edison bulb. The 003 goes on sale exclusively in Harrods from 1 October for £150, and lasts for 10,000 hours. That's a lot of beauty! 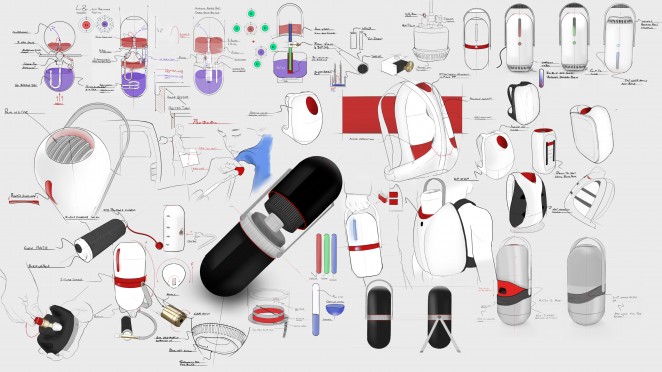 Is is often the case with the James Dyson Award, which celebrates design and technological innovation in up-and-coming inventors, this year's winner has created a product that actually stands to greatly benefit the world at large. If it should ever actually see the light of day of course. The winner in question is a design by William Broadway, who was declared the 2016 James Dyson Award winner for the UK earlier this week. The unit was inspired by an idea Albert Einstein patented more than 110 years ago in 1906 called “Icyball,” a refrigeration unit for farmers that didn’t require electricity and lasted for 24 hours. Broadway’s design is a response to the estimated 19.4 million children worldwide who failed to receive routine immunisation services annually. More than 60% of these children are living in developing countries.

Broadway’s Isobar prototype contains ammonia and water heated in a low pressure vessel. The ammonia vaporises and separates from the water into the upper chamber where it is trapped by a valve. It stays trapped here until the cooling effect is needed. A £2,000 prize has been given to Broadway to develop his design and he plans to invest in creating more advanced prototypes and applying for patents. Broadway said of his winning entry: “It was such an innovative technology in 1929 that was forgotten and taken over by electric refrigeration. It gives me the confidence to pursue it whole heartedly in the knowledge that I can actually make this device and that it could have a great impact and benefit thousands of people.” The win sees Broadway entered into the international James Dyson Award competition, which carries a £30,000 prize and will be announced on 27 October. 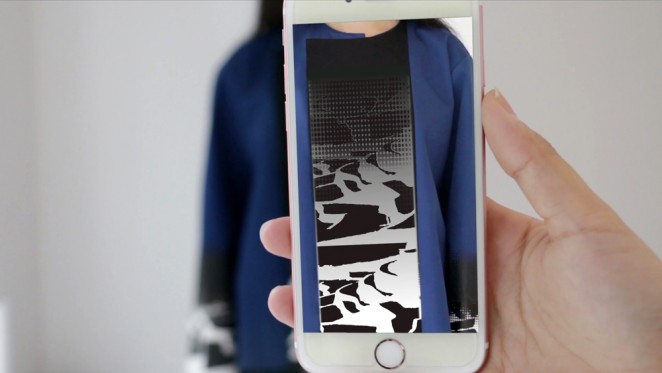 Parsons School of Design graduate Kailu Guan has created a range of garments that present 3D shapes and moving patterns when viewed on a digital device. Designed under the moniker KG Projects, the collection uses augmented reality to produce extra effects across the clothing on screen. For her graduate collection, Guan worked with programmers and animators to combine existing technology with their own coding, creating a bespoke app. Screen-printed patterns on the fabrics are used as triggers and are read by the app when the device's camera is pointed at them. The app then displays the programmed digital additions on the screen to look as if they are part of the garments. Huge spikes and dots, and rippling water are among the effects that Guan has used. The clothes themselves are made from suede, organic wool and cotton, with printing and texturing techniques including foiling and flocking. The garments are on show at the Talent exhibition of graduate fashion projects from eight schools around the world, located in Governors Island and open until 18 September 2016. The showcase is forms part of New York Textile Month, which was initiated by trend forecaster and Parsons professor Li Edelkoort to highlight the revival of cloth, and is taking place across the city throughout September.

“There were so many stories I wanted to tell with my clothing and as everything now is digitised, I thought why don't we use a digital platform like an app to bring back the stories” 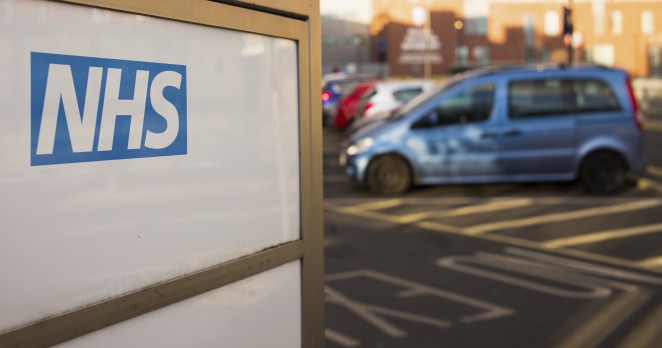 The NHS website is set to be completely redesigned by the end of next year into a centralised hub where patients will be able to order prescriptions, book an appointment and find a local GP. The overhaul is part of a wider Department of Health initiative to boost the digital footprint in the NHS. The new website will allow patients to register with a GP, access healthcare records such as test results, and receive medical advice. It will also allow them to view and book appointments, and order and track prescriptions. As part of the initiative, data from NHS-approved health apps will also now be added into patients’ records and this data will be used to help guide each patient's choices regarding how they proceed with their treatments. The website will also include a library of health apps and wearable devices, which have been given the NHS seal of approval. 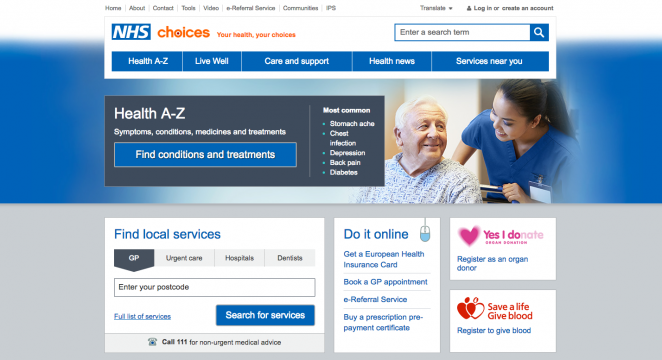 Health Secretary Jeremy Hunt made the announcement this week, and the digital transformation will be headed up by the NHS’ in-house team, NHS Digital. Andy Williams, CEO at NHS Digital, said: “Our purpose is to harness information and technology to deliver better health and care. I am excited by the agenda outlined and believe we have only just begun to achieve the transformational change and deliver the real benefits that digital technologies can bring to doctors, nurses, social workers, patients and the public.”