Jukin Media, a global digital media company founded on the belief that the future of storytelling is user generated, has released results from a research study exploring the effectiveness of the use of organic user-generated video (UGC) in advertising.

The study, conducted in partnership with The University of Southern California’s M.S. in Applied Psychology program, revealed that ads which utilize UGC were perceived as more memorable, unique, engaging, authentic, and relatable, than traditional video ads.

GET THE WHITE PAPER NOW: The Definitive Guide to UGC in Advertising with insights from the USC study 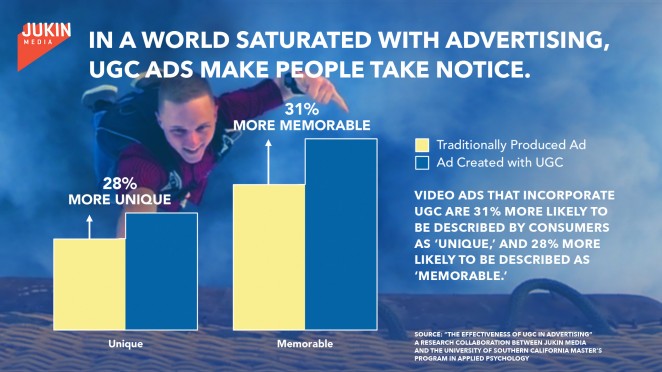 The study, which combined qualitative and quantitative analysis and featured in-depth interviews, focus groups, online listening, and an interactive survey, asked consumers across age groups and demographics to view various video advertisements -- both traditional ads and ads that incorporate UGC -- and report back on their perceptions of those ads across a number of measures.

With more than 500 US adults ages 18 and older participating, the study presents some eye-opening findings for advertisers: 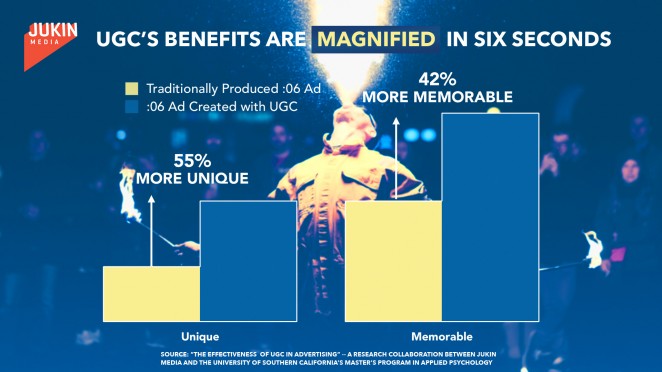 ”Capturing and harnessing real, authentic moments is incredibly powerful,” said Jukin Media Founder and CEO Jonathan Skogmo. “In recent years the advertising community has begun to embrace UGC for the authenticity that it lends to brand campaigns, but there was little hard data around its effectiveness. This study confirms what Jukin has been preaching to the advertising community for the last few years, that consumers respond favorably to seeing ads that incorporate stories of real people in real-life situations. You cannot re-manufacture these organic moments captured by everyday people.”

The researchers noted that in the focus group portion of the study, many of the research subjects who were exposed to ads with UGC congregated around the idea that the ads seemed “relatable” and “authentic.” Key insights from the study, as well as important context surrounding user-generated advertising, can be found here in The Definitive Guide to User-Generated Advertising.

More information about the study

More than 500 US adults participated in the study, and all findings presented are statistically significant at a 95% confidence interval. The survey was constructed using eight separate “ad pairs,” comprised of two publicly available video ads of similar length from the same brand, one of which was a user-generated ad, while one was a traditionally produced ad. The ad pairs were assembled with several controls — such as length, and release date — to ensure that only the creative’s use of UGC (or not) was independent. Participants were randomly assigned to watch 1 of 4 video groups comprised, in random order, of two randomly selected ad pairs. Respondents were shown only one video from each ad pair, and asked several questions about their perceptions of the ad and the brand represented in each advertisement.

About Jukin Media Jukin Media is a global entertainment company built on the belief that the future of storytelling is user generated. Jukin provides a wide range of solutions that allow premium brands, publishers, and media networks, to commercially utilize user-generated video content. Jukin produces original content for TV, the web, and emerging platforms, and is owner/ operator of a portfolio of social video properties that includes FailArmy, People Are Awesome, The Pet Collective, and JukinVideo; the properties combine for more than 125 million fans online and four billion monthly video views. For more information, visit http://www.jukinmedia.com/corporate.