The Ad Council, North America's largest PSA producer, announced yesterday at its 61st Annual Public Service Award Dinner, which is to be hosted by comedian and satirist Stephen Colbert, will be honouring FedEx chairman and CEO, Frederick W. Smith. The dinner, which recognises the industries and individuals who support the Ad Council and its public service campaigns, will be held on the 19th of November at the world famous Waldorf Astoria Hotel in New York. The Ad Council will be striving to top last year's dinner, which raised an unprecedented $3.4 million to support the council and its 50 national public service campaigns. Colbert is quite a coup for the council, as the 'Colbert Report' host has recently been announced to succeed David Letterman as the host of 'The Tonight Show' on CBS. Previous hosts of the dinner include Ellen DeGeneres, Jimmy Fallon, Tina Fey and Conan O'Brien.

The dinner, which recognises the industries and individuals who support the Ad Council and its public service campaigns, will be held at the Waldorf Astoria Hotel in New York

Smith is a noted philanthropist, who has been a global voice for environmental sustainability, disaster relief, education and road safety, and under his leadership, FedEx has contributed over $46 million in cash and charitable shipping, along with thousands of volunteer hours through the "FedEx Cares" scheme. As a reward for his effort, Smith will be presented with this year's public service award at the dinner, which will be attended by more than 1,300 prominent executives from the media, advertising, and corporate communities. The dinner will be chaired by Starcom MediaVest Group's Laura Desmond, who is also the freshly appointed chair of the Ad Council's board of directors. Adhering to tradition, Smith will be receiving the award from last year's honouree, Tim Armstrong, AOL's chairman and CEO. 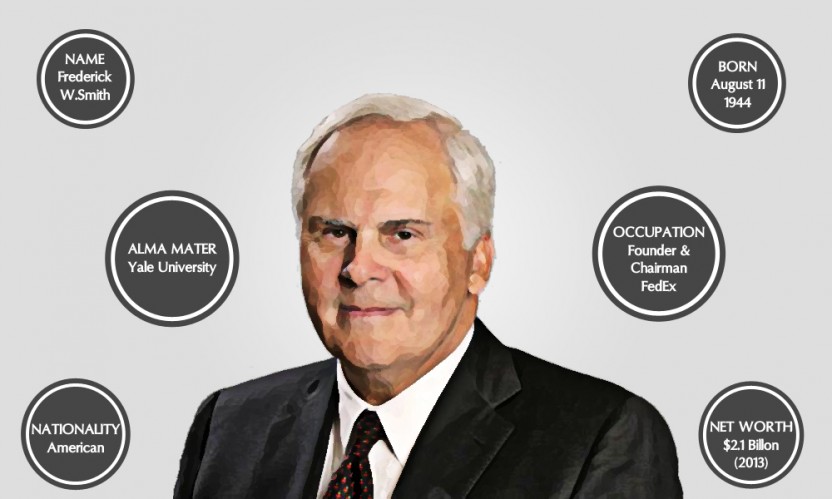 A portrait of Frederick W. Smith

Under Smith's leadership, FedEx has been instrumental in emergency response efforts for disasters such as Super Storm Sandy and Typhoon Haiyan, helping to rebuild communities and ecosystems affected by such cataclysmic natural disasters. They also provide support to needful communities in remote parts of the world by distributing potentially life-saving medication to more than 1000 health clinics. However, it's thought that Smith has been selected this year due to the work FedEx has done on issues that the Ad Council addresses with its own campaigns. These issues include reducing the educational disparity in African American and Hispanic youth in America through organisations such as the United Negro College Fund and the Hispanic Scholarship Fund.

Under Smith's leadership, FedEx has been instrumental in emergency response efforts for disasters such as Super Storm Sandy and Typhoon Haiyan

Peggy Conlon, the president and CEO of the Ad Council, says the dinner is not only the highlight of the council's year, but a way for them to “Celebrate the year's successes and honour those who support the Ad Council.” She is thrilled to “Honour Fred Smith for his commitment to giving to those in need in communities throughout the world,” and is very excited to welcome Stephen Colbert as the master of ceremonies for what she feels will be “A marvellous program.”

Benjamin Hiorns is a freelance writer and musician from the UK who once received a guitar through FedEx from Alaska that arrived without a single scratch. That same month he also received a guitar from London through Royal Mail that looked like it had gone ten rounds with a grizzly bear.