Innovative production studio UNIT9 has teamed up with Saatchi & Saatchi Italy to create a virtual “Perfect Woman” using real-time projection mapping. The live experiment was created to promote Vitasnella mineral water, one of the most popular bottled water brands in Italy, and does so by promoting the brand's thoughts on the importance of our own individual attitudes towards beauty. The unique social experiment devices by the studio put a literal spotlight on our expectations of how women should look, and did so by projecting these unrealistic ideals on to a literal living canvas. Eight men and women were randomly selected from the city of Milan to study a 'plus size' model (Fabiola Hunter) and then use a specifically developed iPad app to identify and adjust what they saw as the women's 'problem zones'. These alterations were then fed into a projector and beamed back on to the model to reveal the dramatic disparity between what is real, and what people's (perhaps media-biased) perceptions of beauty look like. 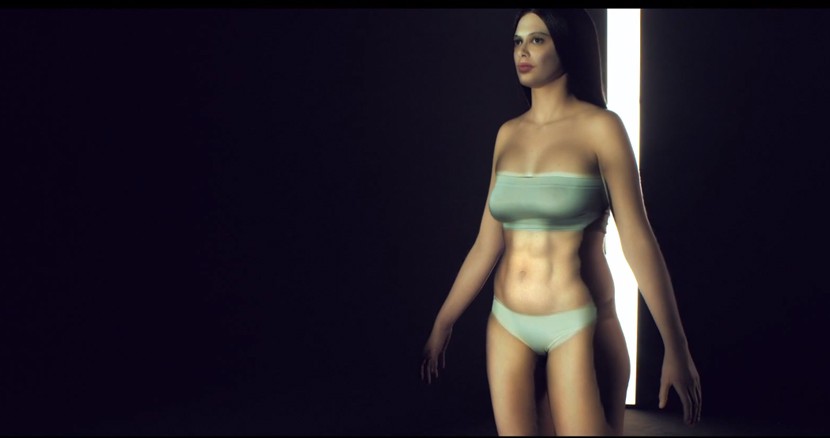 In the accompanying video (below), the participants all seem quite pleased with their handy work, but the veil is lifted when the model is handed a bottle of Vitasnella water, which appears to wash over her body, erasing the phoney imprint and revealing her as her true, beautiful self. It's a stunning effect that caps off an interesting concept, though some might argue it's all carried off in a very heavy-handed fashion. The technology behind the experiment is fascinating though, and the augmented reality serves to underline, instead of overwrite the empowering message that the perfect woman doesn't exist, and that all women should learn to accept their real selves.

In order to achieve the desired effect for the experiment, UNIT9 used a combination of real-time projection mapping and augmented reality. First they did a 3D scan of the model and also used a newly developed head tracking system that let the team capture movements in real-time, meaning the illusion was all the more realistic. For those that wish to learn more about the processes behind the shoot, a fascinating behind-the-scenes video reveals how the effects were achieved. The film was launched on Sunday (March 8) to mark International Women's Day. Media planning for the campaign is handled by Carat. The marketing plan for the promotion of the video and the #MeStessaAlMeglio (MyselfAtBest) hashtag has been carried out by Ambito5.

The live experiment was created to promote Vitasnella mineral water, one of the most popular bottled water brands in Italy

The video is lent an extra emotional weight by the model herself, who begins the video telling us how people have spent her entire life telling her that she needs to look a certain way, and ends it happy and comfortable in her own skin. Though it has to be said, having viewed some of the brand's earlier marketing works, it would appear they themselves have been feeding into the same distorted mindset they are apparently attempting to eradicate with this piece. Still. Everyone has to start somewhere.