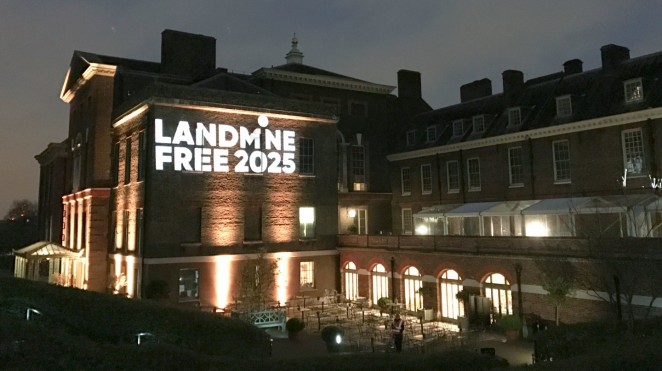 Glazier Design has created the identity for Landmine Free 2025, a new initiative by mine clearance charities HALO Trust and MAG. Landmine Free 2025 will put pressure on governments – particularly those that signed the 1997 Ottawa Treaty, which set out to eliminate anti-personnel landmines. The consultancy was approached by the two charities on the strength of previous charity work it had done. The initial brief was branding for a launch event but this soon expanded to an ongoing campaign, which will continue until 2025. Both charities have been represented in the identity by using the blue colour of HALO and the red colour of MAG. Several routes were taken before a contemporary block font was chosen which is “clear, unescapable and feels like something you would associate with governments and international summits.” The figure, designed into the wordmark represents the people who are effected by explosives. At an event at Kensington Palace last night HRH Prince Harry launched the Landmine Free 2025 event, where the brand was seen for the first time and the British Government pledged £100 million to the cause. Glazier says Glazier Design worked on the project partly on a pro-bono basis and partly for a fee.

Consultancy Springetts has carried out the rebrand and packaging redesign for Fab, which makes a clearer reference to the trio of flavours synonymous with the ice lolly and its history. The rebrand marks 50 years since the ice lolly brand first launched, creating a more stripped back visual identity and illustrative packaging. The consultancy was commissioned to carry out the redesign by Fab’s parent company Froneri after it decided that the brand had lost its way and begun to look like “every other sprinkle brand lolly in the freezer.” The new identity looks to “make the brand iconic again” by championing the three elements that make a Fab a Fab: strawberry, white ice milk and chocolate topped with sprinkles. An updated logo retains the outline shape and blue colour seen in previous versions, but now appears less over-engineered and artificial. The three-dimensional effect used previously has been stripped away and a slightly textured style has been applied, while the “A” and “B” characters are now softer and more curved in shape. An illustration of the ice lolly itself now appears on all of the packaging, with the words “for 50 years” appearing in gold directly below the word marque. The consultancy has also designed the packaging and campaign for a limited edition birthday cake flavour of Fab created to celebrate its 50th anniversary. The redesigned branding and packaging is now rolling out across the UK, with additional campaigns expected to launch during the summer.

Global brand design agency BrandOpus has designed the identity and packaging for a new ingredients and gifting range from award-winning chocolate brand Willie’s Cacao. The select range, including Cacao Tea Infusion; Hazelnut Chocolate Spread; Chulucanas Hot Chocolate and Cacao Nib Brandy is a collection of exclusive small batches hand-prepared by founder Willie Harcourt-Cooze, direct from his own kitchen. Following on from the overwhelming success of his chocolate bar and chefs’ ingredients ranges, Willie has developed Willie’s Kitchen range as a way to inspire people to use chocolate in more adventurous ways. The range is available to purchase exclusively on Willie’s Cacao website. 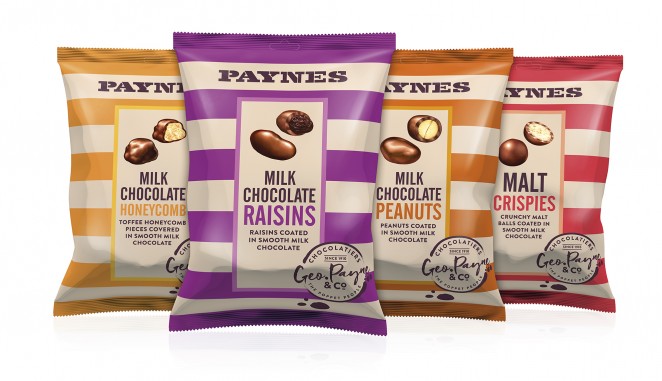 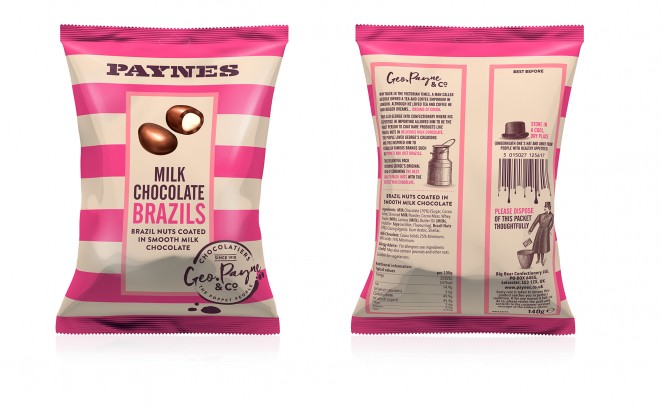 Stocks Taylor Benson has designed the packaging for a new range of chocolates for Big Bear Confectionery, reintroducing the Paynes' brand with a collection of chocolate covered confectionery. Stocks Taylor Benson were tasked with bringing the Paynes' brand back to life with a colourful range of confectionery packaging. The products use Geo.Payne’s original idea of combining the best quality ingredients with the tastiest milk chocolate and so the new packaging design needed to portray the heritage of this product. Bold, horizontal stripes differentiate the flavours and echo candy packaging of times gone by, whilst vibrant colour choices give increased shelf standout and reinvigorate the brand for the 21st Century. The design features a large, confident brand mark, building on the recognition of the original Paynes' brand. As chocolatiers since 1910, there’s a wealth of experience that needs to be communicated on pack, so Stocks Taylor Benson reintroduced the character of Geo.Payne, adding heritage and personality to the sweet pouches. The tone of voice used within the designs brings the character of Geo.Payne to life, adding extra quirky details to expand on George’s story. The storage instructions suggest keeping the chocolates ‘underneath one’s hat and away from people with healthy appetites’ and a melting chocolate barcode emphasises their chocolatier background. A strapline from the original Paynes' chocolate wrappers ‘Made by the Poppet People’ was also reintroduced. It’s a nice nod to the old designs and the link to Poppets provides a great endorsement for the brand.

Yarza Twins has designed the place branding for Oia Council’s tourist department, a small town based in Galicia, Spain. The identity emphasises the area’s outdoor activities such as surfing and historical tourist spots such as the monastery. The London-based studio has created an identity which sees the name Oia stacked vertically, as well as a green colour palette. 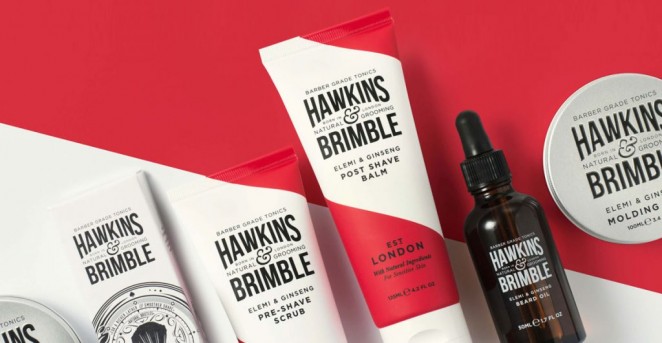 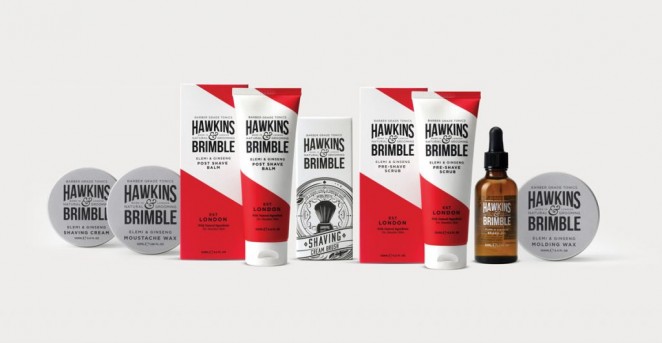 Design Happy have created a new British men’s grooming brand from the ground up. The range called Hawkins & Brimble, harks back to the natural qualities of barber tonics of old, yet tailored to complement the modern man’s busy lifestyle. It was important to find a positioning that stood out from competitors in an iconic way. Design Happy were aware of the many barber and beard ranges that were flourishingly on trend but felt there was still room in the market for a more modern beard defining brand. Since the launch of Hawkins & Brimble in November 2016, the range has secured more than 15 online retail outlets and will be rolling out to Etos stores across Europe early in 2017. 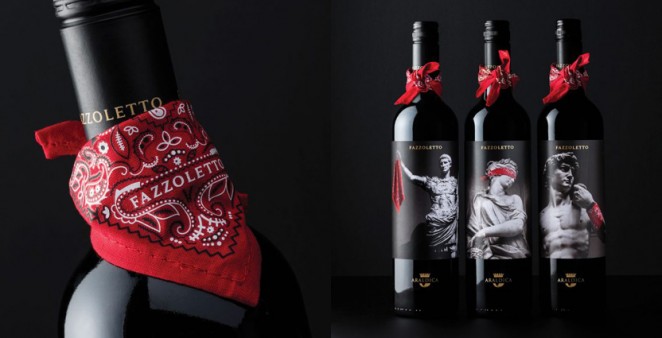 Drinks design specialist Denomination has unveiled packaging and brand identity for Fazzoletto, a new wine from Piedmont-based wine co-operative Araldica. The challenger brand from Northern Italy has a unique contemporary wine style and is made using revolutionary winemaking techniques, which needed to be reflected in the design. Denomination developed a compelling brand story around the ‘fazzoletto’, which in Italian means ‘neckerchief’ and was the term used to describe Italian partisan fighters who wore red fazzolettos in combat as identifiers at the end of World War II. The name captures the contemporary and rebellious feel of the new brand that flies in the face of the traditional wine category and yet is an authentic nod to Italian heritage. The brand identity of Fazzoletto is brought to life by bottles that feature black and white images of famous Italian sculptures which have been “vandalised” by an unseen hand who has tied a red neckerchief in a humorous way on the sculpture. Denomination further elevated the famous red neckerchief by tying a mini fazzoletto around the neck of each bottle. The pop of the red neckerchief against the moody black and white images helps the bottle stand out on shelf and appeal as an intriguing and interesting new Italian brand. The black and white imagery, as well the prestigious Araldica badge on the front of the bottle, adds Italian authenticity and sophistication, completing the strong and appealing shelf presence. 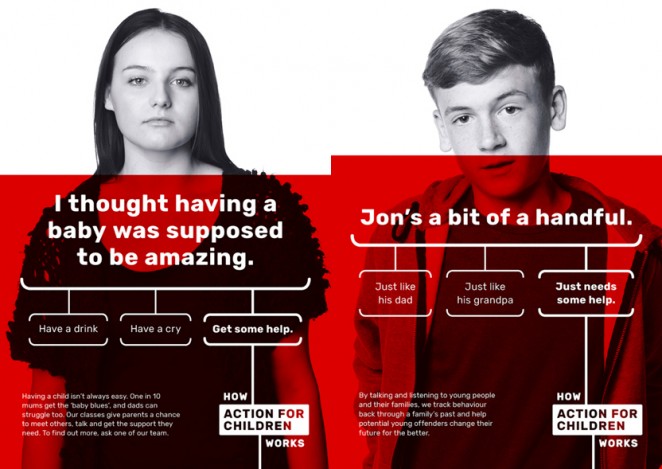 Johnson Banks has rebranded charity Action for Children around the idea of flow charts, setting out different scenarios which always end with the phrase: How Action for Children Works. The charity, which changed its name in 2008 from National Children’s Home, runs fostering and adoption services, offers family counselling and domestic abuse counselling, operates short break residential homes and works with schools. A new identity system was inspired by a research stage that showed Johnson Banks how the organisation is always breaking cycles and re-routing lives for the better. A series of posters was created based on the accounts of staff who work for the charity. These stories were collected by Johnson Banks as they went on a UK tour running workshops. The roll out includes a campaign across the Guardian and the Observer, which replaces a previous advertising strategy where a call is put out for foster parents in the new year. All staff have received a brand booklet and a staff newspaper. Offices have new signage, the website has been redesigned and a range of stationery has been created. 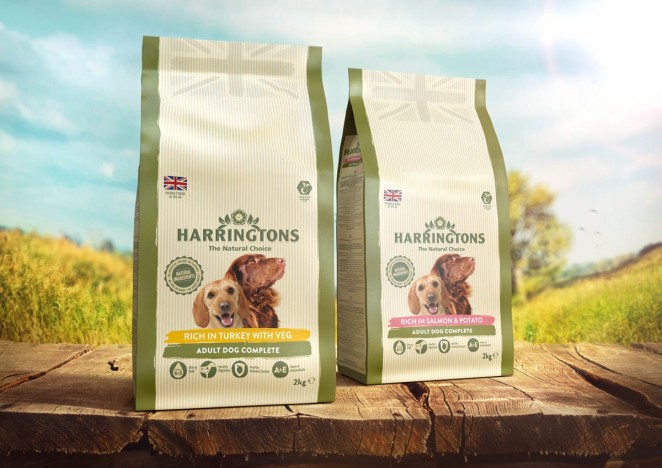 Global design and branding agency Hornall Anderson has redesigned leading dog food brand Harringtons to elevate its natural qualities and British provenance. The new look packs, which will help Harringtons stand out in a crowded category and simplify the shopping experience for consumers, are rolling out across the UK from April. Hornall Anderson updated the existing packaging, while retaining and elevating the healthy and natural elements of the brand, using paper packaging and introducing a craft feel to the design, including the use of hand drawn brushstrokes. A brighter colour palette achieves standout, while clearer hierarchy of on pack messaging makes it easier for busy customers to choose. Packs are now easier to shop by dog size, such as puppy or adult. An updated, simplified and bold brand mark and clearer icons have been added. Messaging about the natural ingredients in Harringtons is more prominent, to correspond with the trend for natural food in the pet care category. Elements of the previous packaging design which worked, such as the dog photography, were kept to secure customer loyalty. 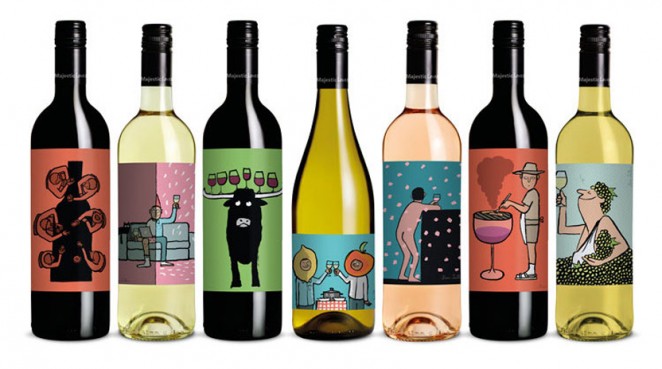 French illustrator Jean Jullien has designed wine labels for off-license Majestic Wine, which are purely illustrative and carry no name, messaging or typography. The “wines without words” project is for new own-label entry range Majestic Loves and launches this Spring. The range of seven wines feature a series of playful illustrations showing “the feeling of the wines rather than the standard grape, region, vintage formula.” This is the first time that Jullien, who is known for his satirical style, has worked on packaging for Majestic. Last year he worked on a series of posters for the company’s Tasting Club scheme.