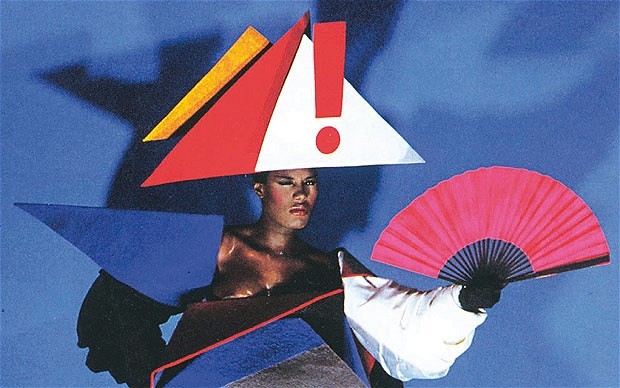 Postmodernism at the V&A

Hello dear blog readers. Apologies for posting this so late in the day but I have been out at the V&A Museum all afternoon trying to get my head around just what exactly Postmodernism is. Stupid though this may sound I managed to complete my art degree and 27 years of my life without having any grasp of the concept whatsoever. Thankfully the V&A Museum have now answered that with their new exhibition Postmodernism: Style and Subversion 1970 1990 which is running from now until the 15th January.

The exhibition starts with the interesting and yet rather dry subject of the postmodern architectural movement in the early 1970's, kick started by people like Robert Venturi and Denise Scott Brown and inspired by the low-popular culture of Las Vegas.

From here you can then follow the progress of postmodernism as it started to influence all areas of popular culture including fashion, film, graphics, art and music. There are over 250 objects on show, all of which exude a rebellious and punkish approach to colour, purpose, pattern and style, sticking up two fingers at the purity and simplicity that modernism was influencing society with.

There is radical design from Ettore Sottass and Alessandro Mendini in the form of wooden teapots and bulbous gas pumps which more resemble Liquorice Allsorts. Also, ludicrous pieces of furniture by Peter de Bruyne which are cobbled together from modern monochrome laminate pieces and a chunk from a historicist French baroque piece, this was known as bricolage and became a popular process in the craft and design worlds. There is also extensive information and examples of the designs from the Italian collectives Studio Alchymia and Memphis, these two groups eventually grabbed the attention of designers from across the globe who all then looked to Italy for their inspiration.

Concrete seems to have a heavy presence (ho ho ho), in the form of fashion designer Ron Arad's concrete stereo and his concrete mannequins which were made for his post-punk pop-up boutique store, along with scaffolding, graffiti and neon lights, all commonplace in today's high street but at the time these ideas were radical. My old favourite Vivienne Westwood also has an outfit on show, a full skirt printed with images from the film Blade Runner (also on show in the exhibition) which was made for her 1983 Punkature collection which was a subversion of the 80's concept of power dressing, similarly Rei Kawakubo for Comme de Garcons showed how beauty could come in random and unfinished forms with her monochrome and oversized collections. Jewelry by Bernhard Schobinger was made from shards of glass from war damaged Berlin and shattered roof tiles from Hiroshima.

The exhibition takes a dramatic turn as postmodernism went mainstream in the 1980's and everything became a style statement with vivid colour and theatricality born out of dancers, choreographers, art directors, performance artists, drag queens, pop stars, partygoers, poseurs and night clubbers. There is a distinct whiff of the New Wave around with music, videos, photographs and costumes from the likes of Grace Jones, Devo, Kraftwerk, Grandmaster Flash and Laurie Anderson. In the graphics room you can find the bricolage trend continuing in the form of record sleeves and magazines such as The Face and i-D.

The final part of the exhibition looks at how postmodernism collapsed under its own success and how designers and collectors sold out to a more commercial and mainstream world where materialism and wealth were key, Jeff Koons and Andy Warhol made art which commented on this demise.

So there we have it, I consider myself educated, and you should get down to the V&A and get educated too as postmodernism as a fascinating world of colour and cool, if not a little vague and pretentious!