Anyone who has ever spent any amount of time in London would struggle to ascertain where it got its nickname from, as “The Big Smoke” is one of the most heavily polluted major cities in Europe. One particularly green-fingered tech company, however, is looking to strike back against the air pollution problem plaguing the capital with a fleet of (wait for it) high tech pigeons. OK, it's not the pigeons themselves that are high tech, but it's still a pretty nifty idea.

“Putting air sensors on the back of pigeons helps Londoners understand the impact of pollution in an accessible, tangible and immediate way” 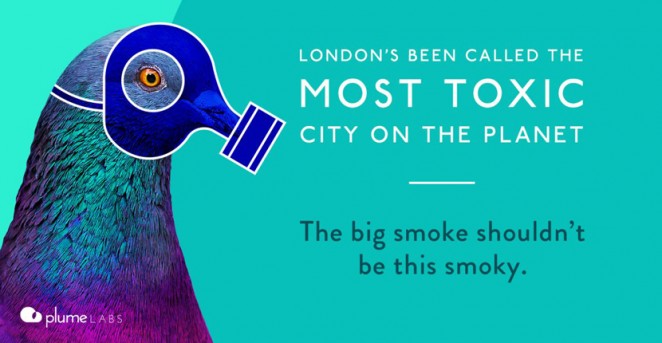 The concept has been created by Plume Labs; a technology company that helps consumers track and reduce their exposure to air pollution, and it's set to launch the first ever flock of pollution-monitoring pigeons across London this week. The initiative was created in partnership with DigitasLBi with support from industry partners at Twitter, and aims to raise awareness of air pollution. Over the course of three days, Plume Labs and DigitasLBi will be releasing ten pigeons wearing small pollution-monitoring backpacks. Lightweight pollution sensors, created by the company, are stitched onto small fabric vests which fit comfortably on the pigeons and measure levels of nitrogen dioxide and ozone, the main gases behind harmful urban air pollution.

The Pigeon Air Patrol will monitor air quality in the capital and report back via Twitter. Londoners can tweet their location to the handle @PigeonAir to receive an instant response from one of the pigeons (named Coco, Julius and Norbert), informing them about the level of pollution in their area. Recipients are also invited to visit the Pigeon Air Patrol microsite, where they can view a live map of the pigeons’ flights, learn about air pollution and its health risks, find out more about the pigeons themselves (their turn-ons and turn-offs) and download the Plume Air mobile app, which acts as an urban weather report that provides its users with timely, accurate, and actionable information on live and predictive air pollution levels in their city, helping make the air we breathe more transparent. The campaign also encourages Londoners to join the Air Patrol by becoming beta testers for a wearable version of Plume Labs’ air pollution measuring device, and will be supported by Promoted Tweets as well as outreach activity to relevant influencers on Twitter.

Romain Lacombe, CEO at Plume Labs, said: “Air pollution is a huge environmental health issue, killing nearly 10,000 people every year in London alone. Putting air sensors on the back of pigeons goes beyond raising awareness of this problem and helps Londoners understand the impact of pollution in an accessible, tangible and immediate way. DigitasLBi is also helping us to recruit beta testers who will be the first to access our devices, to build a collaborative, human-powered air quality monitoring network across London.” Pierre Duquesnoy, Creative Director at DigitasLBi, added: “Air pollution isn’t sexy and people don’t engage with it. So the heart of our idea was to make air pollution more accessible and relevant to people. The Pigeon Air Patrol is a perfect example of how data combined with creative storytelling can raise awareness of a serious health and environmental issue.” So keep your eyes peeled over the weekend, and maybe consider wearing a hat, because these pigeons might well be technologically enhanced, but they still poop!

Benjamin Hiorns is a freelance writer and struggling musician from the dark heart of Kidderminster in the UK. He's always considered himself something of a pigeon fancier.