Morag Myerscough has redesigned a series of rooms and wards within the Sheffield Children’s Hospital, transforming them into “uplifting” and colourful spaces, which are typical of her inimitable style. The British designer had to meet strict clinical regulations to bring her bright colours and harlequin prints to the wards of the hospital. Myerscough was commissioned to complete the project by Artfelt, an arts programme funded by The Children’s Hospital Charity. The project was funded by the charity’s budget for the hospital of £10 million, which goes towards its development, medical research and specialist equipment. The project sees four different wall designs implemented across 46 ensuite bedrooms in the hospital’s new wing, which was built by Avanti Architects and opened at the end of last year. Myerscough has also created a ward design, which is used across six wards. The aim was to make the rooms feel comfortable and domestic. 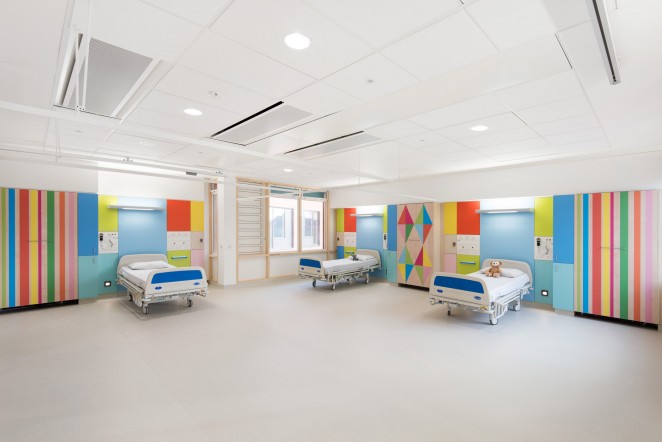 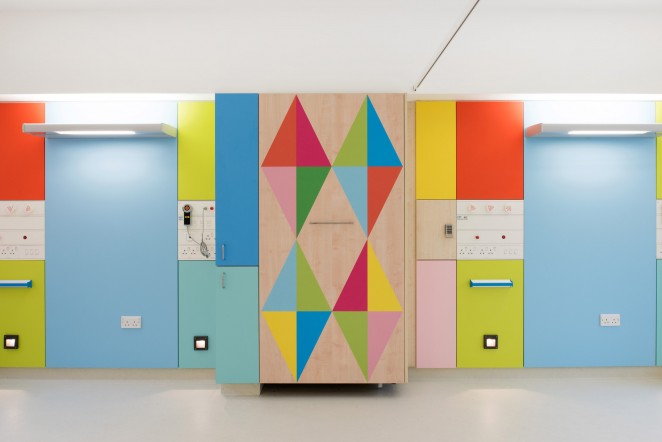 Although children's rooms might seem perfectly suited to Myerscough's colourful, graphic style, the design process was far from straightforward The four designs are of different degrees of brightness and intensities, and are aimed at different age ranges of children and for different medical conditions. Myerscough gave some of the rooms a paler colour scheme to suit children with autism or others who have an intolerance to bright patterns. She also wanted the rooms to feel appropriate to older children. Myerscough’s design concepts were subject to patient and clinician feedback, with Artfelt presenting both groups with miniature, scale models of redesigned rooms and gathering their opinions. Roughly 25 clinicians were consulted, and 80 patients and their families. 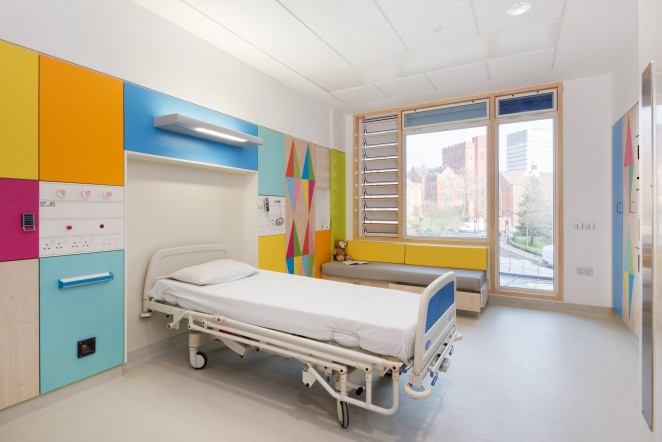 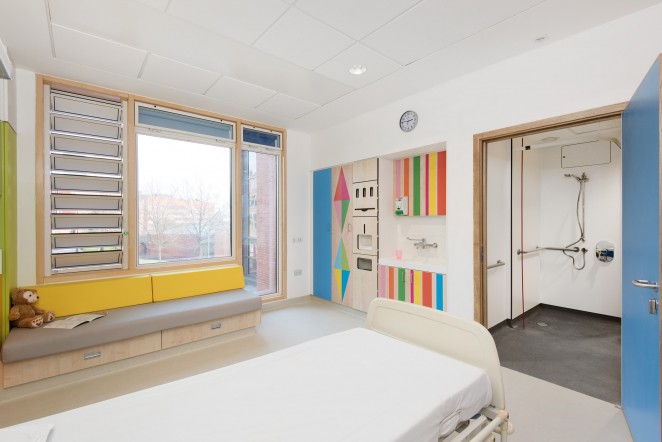 The hospital also required that everything be sterile and easy to clean, so Myerscough had to work entirely with plastic laminate. The wood-like panels in the wards is Formica, which has the woodgrain screen-printed onto paper and then laminated. Painting directly onto the Formica wasn't possible, and neither was screen-printing additional colours onto the paper. In the end she ended up scanning the wood grain and digitally adding patterns to it. That combined pattern was then printed onto paper and laminated like normal Formica. Besides the colours and patterns, a defining feature of the space is its relative lack of medical equipment. A lot of the cables and devices are stored behind the Formica panels, giving the space a more homely feel. The rooms were also built with large windows, to let in natural light. 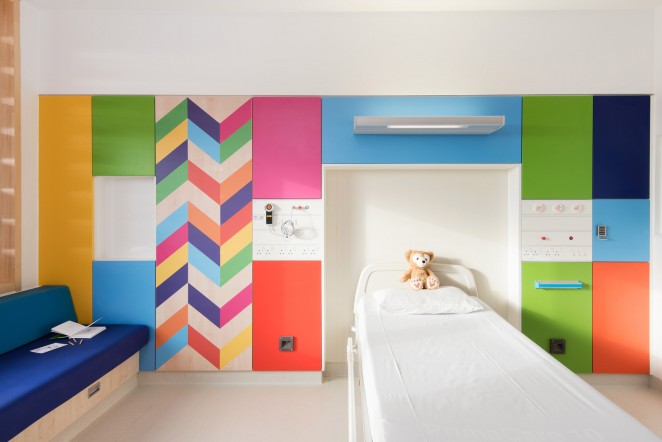 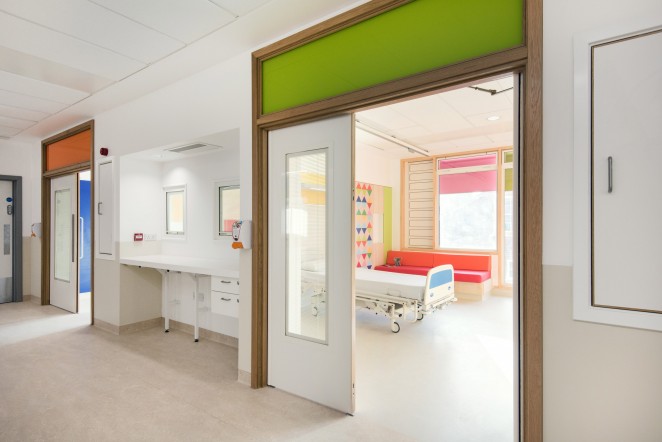 Morag Myerscough said of her designs: “It was important that it wasn’t just one room for everybody. We didn’t want the monotonousness of the same design for everything. Although the rooms are for children, I didn't want them to be childish because children of all different age groups will be staying in them. I also wanted to create somewhere parents would be happy to spend time too. It was just about making a bedroom that you felt good to be in. To get the really pure colours that I wanted, I had hoped to screen print my own pattern onto the existing wood grain. Unfortunately we couldn't do that because you can only screen print one or two colours onto the paper before it disintegrates. We pushed the process to ensure we kept the warmth of the wood grain. We managed it – but it did take a year!” 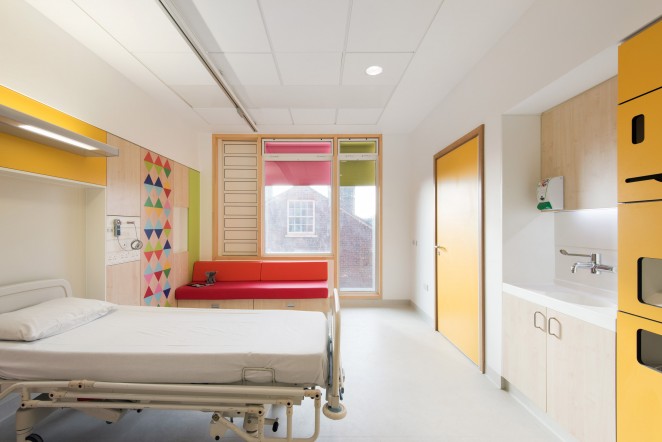 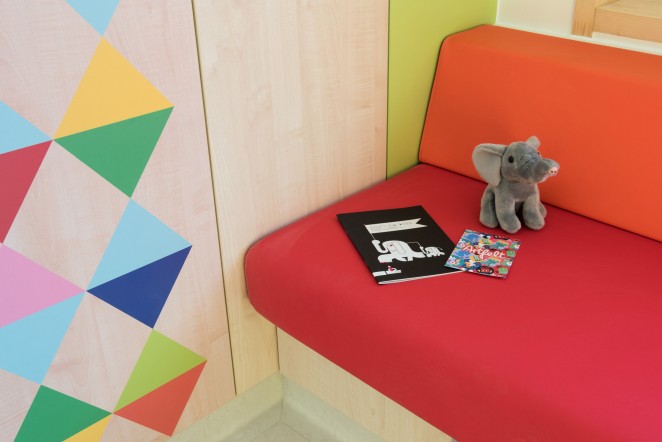 The main entrance and outpatients department of the new wing at Sheffield Children’s Hospital opened in November 2016. The bedrooms have now been completed and the whole site will be open for use from this summer onwards. Patients have already expressed positive reactions to the designs. Myerscough explains: “I wasn’t present with patients, only Artfelt, because sometimes people feel they have to say they like the work if the artist is there, but the patient feedback was unbelievable. 98% said they didn’t want nondescript bedrooms, they wanted them to be joyous.” Artfelt manager Cat Powell felt that decorating wards and injecting colour into them does not only enhance the experience of patients, but also helps the hospital save costs. She added “Art is proven to speed recovery, alleviate anxiety and improve the mood of patients and visitors. The feedback from families really swayed the hospital staff and they were very supportive in taking the risk.” 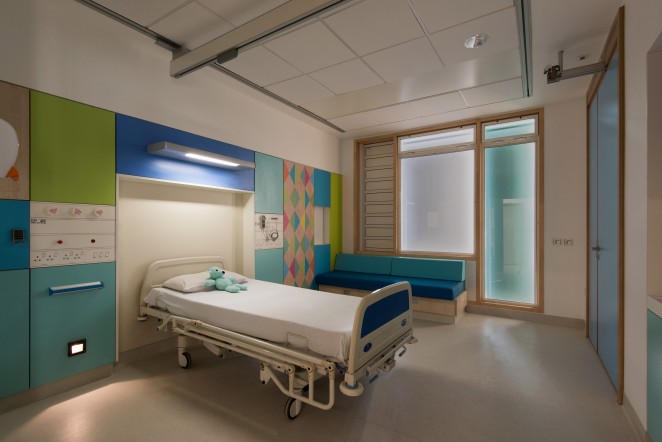