Monster, the online jobs service, has launched an ambitious and quite literal new pan-European campaign introducing a formidable new character to reinvigorate the brand. The pan-European campaign is the first work by mcgarrybowen for Monster since being appointed to the business at the end of February this year, and literally brings Monster to life as a giant monster that looks like a less friendly rendition of the McDonald's Grimace, and is being posited by the brand as, essentially a “Big, mean, job-getting machine.” The campaign targets a new generation of Millennial job seekers, a generation brimming with ambition, but coming up against the harsh realities of the job market. The campaign aims to reassure Millennial job seekers that, with the power of Monster behind them, nothing can stand in the way of their dream jobs.

“Rather than treating those early in their careers as victims, we are going to treat them as the future masters of the universe”

The first phase of the campaign was unveiled this week in the UK, Germany, France, and Luxembourg, with rollout continuing throughout the year. The campaign will run initially in large outdoor formats. In the UK, meanwhile, the “Monster” will take over the Waterloo IMAX and the Waterloo Motion digital OOH, as well as full bus wraps around the capital. As well as outdoor ads in the four launch markets, the campaign will also include online and digital display ads, and radio ads launching on Monday, May 16th in the UK and Germany, and will also include a TV sponsorship campaign in France in June. It's the brand's largest brand campaign for seven years, and will also mark the first time Monster has used Snapchat “At scale,” which dramatically underlines its focus towards millennials, specifically those just about to leave university.

Paul Jordan, ECD at mcgarrybowen, said: “Monster used to be famous for producing some of the best creative in the world. So at mcgarrybowen we have woken the sleeping giant in order that Monster can wreak havoc in the world once more.”

Andrew Warner, VP of Marketing at Monster, added: “There’s a big job to be done and we needed a campaign that would ensure Monster is the number one destination when it comes to finding the right job or the right candidate. Bringing Monster to life literally, provides us with a great creative canvas to get that message across.”

Monster is launching the multimillion pound campaign to support a major investment in its product offering, which includes a new web site and increasing the number of jobs on the site from 150,000 to half a million in 12 months. This huge increase has been achieved by signing up more blue chip clients such as Apple, Ferrari and Lloyds, alongside jobs pulled from other websites. Monster has also invested in a new education portal with live chat advice and a ‘tech talent charter’ that hopes to increase diversity within technology by initiatives including working with recruiters to ensure job ads do not alienate candidates from disadvantaged backgrounds. 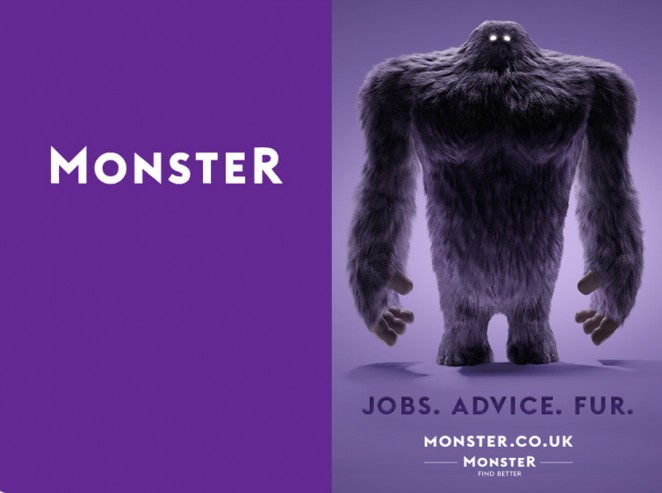 Ha! Really like this. A shift in tone from Monster, great graphics and a really nice concept. Really brings them up to date in a crowded marketplace.