This week, Macmillan Cancer Support has launched a new brand campaign from VCCP, which builds on the charity's message that those suffering from cancer should never need to feel like they're alone. It's a sad fact, but most of us will be affected by cancer at some point in our lives, but that doesn't stop it from being an incredibly isolating illness. The main insight Macmillan has gathered from their patients is that throughout their illness, they all struggle with feelings of intense loneliness, which the charity is attempting to combat with their ongoing “Not Alone” campaign. VCCP has taken the essence of this insight and used it to build an incredibly evocative campaign, which shows cancer sufferers literally transported to some of the loneliest places on earth.

Most of us will be affected by cancer at some point in our lives, but that doesn't stop it from being an incredibly isolating illness

The national, integrated campaign, comprises two 60 second TV spots, digital, social and outdoor activations, as well as a bespoke online hub called “The Source.” It focuses not only on the services offered by the organisation, which is one of Britain's largest charities and was recently named Brand of the Year by the Marketing Society, but on the audience it hopes to inspire to become part of the solution simply by texting FIVE to 70550 and donating £5. The campaign centres on two spots; “Blizzard” and “Mist.” Blizzard (which can be seen below) launched yesterday, and focuses on David, a cancer sufferer stranded in an arctic blizzard, who is dragged out of his isolation by the kind words of a Macmillan nurse. Mist, which will be launched in March, features Claire, another cancer sufferer who is stranded on a misty moor in the rain and is about to give up before she's saved by a friend simply asking her if she's OK. Both spots reflect how easy it is for people living with cancer to feel completely alone, and how easy it is for us to reach out to them.

The second stage of the campaign will launch alongside the Mist ad in March, and will focus on Macmillan's ambitions to reach out to not just those living with cancer, but those affected by cancer. They hope to use a number of OOH and digital executions to inspire the millions of us across the country indirectly affected by the disease to do our collective part in improving the lives of everyone living with this most debilitating and terrifying of illnesses. These executions will include showcase stories from real people living with cancer who were helped immeasurably by a friend that reached out to them in their time of need, underlining what a difference a friendly, helping hand can make. 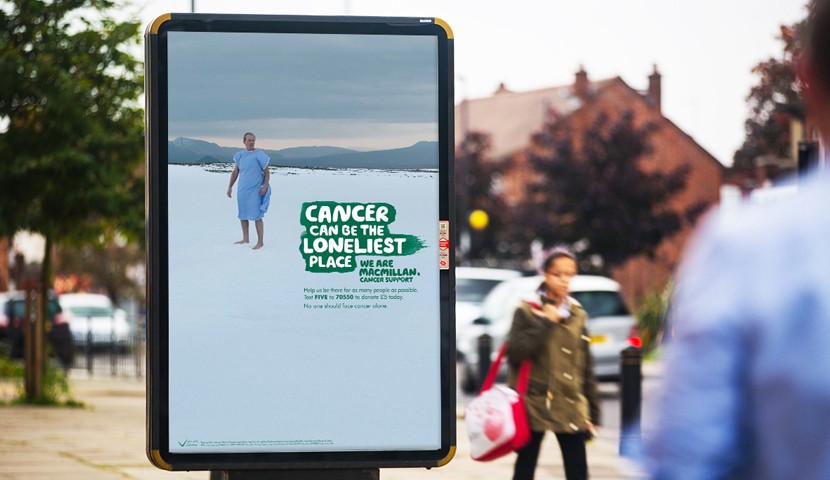 Carly Wilson, head of brand advertising and campaign integration at Macmillan, said they are “Really excited about this development of the Not Alone campaign,” and hopes the new work will “Cut through a busy marketplace, engage with a new audience, and encourage them to reach out to someone they know with cancer.” She also highlights the new online hub, which she says is “Full of great tips and inspiration to help people do just that.” She adds that there are now “2.5 million people now living with cancer in the UK,” so it is more vital than ever before to “Inspire people to support each other as well as support Macmillan.” Adrian Coleman, group CEO of VCCP Partnership, adds that this third installment in the Not Alone campaign aims to build on its previous successes by “Bringing to life how Macmillan can help people feel less isolated as a result of cancer, in a simple but powerful way.”