Looking into the Creator Economy and its Communities

From Twitch to Snapchat, Patreon and OnlyFans, the creator economy has boomed in recent years and especially as the pandemic hit some content creators quite hard.

For those less familiar with the term, the creator economy is that sector of the creative industry made solely by independents, focused on monetising their creativity by building communities through dedicated platforms. But while YouTube and Twitch are perfect for streamers, what other options are left for other independents who are less 'prone' to show themselves on camera?

Twitter has recently announced its own move to step into the creator economy with Super Follows, a way to let Tweeters monetise their efforts on the platform by leveraging their affectionate community. Independents are on the rise, and paid subscriptions seem to be the future of the creator economy, with Patreon being one of the most popular out there. Yes, you can monetise as an independent, and yes, you can possibly make a living out of it, in your own time, with your own creative output, at your very own pace.

To discuss the topic in more depth and understand the various nuances of the subscription-based creator economy, we reached out to Gee Linford Grayson, responsible for UK & Ireland Creator Partnerships at Patreon. Read further to learn more about the creators who are making a real difference on the web! 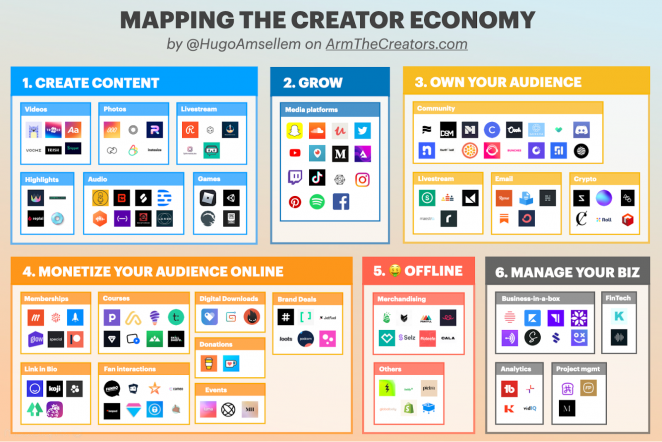 Making it pay to be a part of the creator economy

The term “creator economy” has become something of a buzzword over the last couple of years, and for good reason. Whilst the internet and subsequent the growth of social media has allowed creators to connect with a global audience, these same developments have thrown up questions around ownership, value and burnout. There’s never been a more exciting and challenging time to be a creator — 50 million people worldwide consider themselves to be creators and pre-pandemic the UK’s creative industry contributed £111.7 billion to the economy.

But when it comes to getting paid fairly for their work in today’s world, how many options do creators really have?

In 2013, Jack Conte encountered this problem — millions of people loved his YouTube videos which were costing him thousands of dollars to make, but only a couple of hundred dollars were landing in his bank account. Realising that there must be a way for creators to take greater control over their income, he co-founded Patreon, the membership platform where fans pay their favourite creators a monthly subscription in exchange for exclusive access, extra content, or a closer look into their creative journey.

In a world where creative work has been systematically undervalued, creators are increasingly turning to paid membership as a means of achieving creative and financial independence. With a regular, recurring income, they can afford the freedom to do their best work, and the stability to build an independent creative career. In turn, fans get access to a community built around a shared love of the work of their favourite creator, receive exclusive content, and the chance to become active participants in the work they love.

For creators who have traditionally connected with their audience on social media or streaming services, the status quo has seen powerful companies and platforms make big money for themselves and their advertisers at the expense of the creators whose work is precisely what has been generating their value and attracting the audiences in the first place. Moreover, any audiences built on these platforms ultimately belong to the platform itself, who retain all audience data (such as names and contact details) so that the creator is locked into that platform.

Creators deserve a system that respects the value of their work, pays them fairly, and ultimately empowers them to create what they want to create, not what the algorithm or advertiser dictates. In a system which incentivises clicks over quality, ultimately creators can only earn a fraction of their true worth. But in this exciting new era of the creator economy, the impact of creative work is finally receiving the attention and recognition it’s owed.

The opportunity to strengthen relationships with fans to support creators

While financial and creative independence may be the most readily apparent benefits of paid subscription in the creator economy, an often-overlooked benefit is the transformative impact that building a membership community can have on a creator and their work.

The fans who join a membership are likely the most invested in that creator’s work, and can be a valuable source of constructive feedback. Sharing a piece of work that’s unfinished can feel incredibly daunting, especially in a public setting. However, when you know that your conversation is behind a paywall and with a supportive group of fans, a lot of that pressure is alleviated. There’s also the possibility to involve fans directly in your work. For example, April Pearson invited her patrons to become “co-creators” on her podcast, “Are You Michelle From Skins?”. Through Patreon, April invited her most dedicated fans to join production meetings, submit questions to guests, and even shared promotional assets with them so that they could spread the word about the podcast launch in their own communities.

In developing a supportive community, both in a financial and emotional sense, creators are able to take better care of themselves and their mental health. In many creative industries, you only get paid when you produce a finished piece of work, which puts a huge pressure on churning out as much work as possible and can easily lead to burnout. On platforms such as Patreon and in the Creator Economy in general, you have the opportunity to monetise the whole creative process, as well as build a community who are not only interested in your output, but your wellbeing and your growth too. This is especially important as the work you put so much of yourself into everyday will be consumed by those who care about it most. Your community is compassionate, appreciative and understands that you’re only human.

Many creators on Patreon have put this into practice themselves. Danielle Bernstein of WeWoreWhat recently states on her page: “I’ve been sharing on social media for over 10 years but never this personal and this in depth”. Dawn O’Porter wrote a blog about the trials and tribulations of lockdown life, which she later transformed into her new book “Life in Pieces”. Supportive communities allow a creator to be more vulnerable and personal than you otherwise would or could on other channels, a safe space that allows them to be open, while bringing a sustainable income.

The power of a community

Once you take away the pressure of constantly producing new work and begin to build your community, you can start to reap the rewards as a creative that is able to make content your audience wants and values. I’m lucky enough to work with Patreon creators who, thanks to the support of their communities, get to create the work they want to create, to tell the stories they want to tell. A few come to mind which really epitomise the power of the community.

True crime podcasters Hannah Maguire and Suruthi Bala who host RedHanded, were both able to quit their day jobs, hire a team, and even begin developing a second show, all thanks to the support of their 9,700 patrons who pledge almost £50,000/month.

Bat For Lashes has built her own universe, sharing exclusive music, inspiring content, drawings, letters, artist tips, and more of her creative experience and process. For Natasha, “Bat For Lashes has always been about music, but also so much more”, and this space with her community provides an opportunity to show that.

The brighter future for the creator economy

Every day, we at Patreon are proud to play a part in helping creators get paid to do what they love, by the people who love what they do. The creators we work with and the communities they have built are evidence that there is a fairer future for the creator economy that is evolving the relationship between creator and fan, to engage on new levels, provide support to one another and give their work the value it really and truly deserves.