I'll be honest, I never really got Keith Lemon. It's a shtick that never sat right with me, based, as it is, more on bravado than genuine wit. I will admit, however, that he is the perfect character to front an advertising campaign. That same abrasive quality that makes the character created by former Bo Selecta star Leigh Francis such a chore to sit through for 30 minutes at a time, actually works in his favour when utilised in short bursts, as is the case with this latest campaign for the Carphone Warehouse. Debuting first in cinema alongside this year’s summer blockbusters, the campaign sees the Celebrity Juice host travelling to Dubai, where everyone always gets what they ask for.

The ad shows Keith cruising through the aggressively materialistic country in a gold plated G-Wagon flanked by a Lamborghini and Ferrari, and sporting his latest swimming trunks on a private super yacht with some new local friends. Filmed over three days in an opulent Dubai where everything is upgraded, and in the scorching heat of the desert, Keith continues his quest (outlined in earlier campaigns) to tell the nation to just ask Carphone Warehouse for a “Proper good upgrade deal.” It's kind of annoying, very colourful and undeniably entertaining.

“Holding our TV and social campaigns until September is a key strategic move for us, to ensure we are creating maximum impact with our audiences”

In what is Keith Lemon’s fifth appearance for Carphone Warehouse, the new campaign, created once again by Brothers and Sisters with media planning and buying from blue449, kicked off with a full 60 second ad in cinema’s across the UK from July 22. It is expected nearly 7 million viewers will flock to the cinema to see this year’s hottest summer blockbusters such as Star Trek Beyond, Suicide Squad and The Magnificent 7, and Carphone Warehouse is taking full advantage of several ad gold spots for maximum exposure.

The 30 and 40 second TV ads, meanwhile, will not debut until September 8, as the campaign enters its next phase ahead of one of this year’s most anticipated handset launches (answers on a postcard for that one). In addition, four short videos have been produced specifically for social media to be seeded across Carphone Warehouse social channels including YouTube and Facebook. These short bursts see Keith trying his hand at golf and extreme fishing, reinforcing how ‘satisfying’ and ‘spectacular’ getting an upgrade deal from Carphone Warehouse is.

“Dubai is known for being bigger, better, bling-ier, so what better setting for Keith to upgrade everything he comes across?” 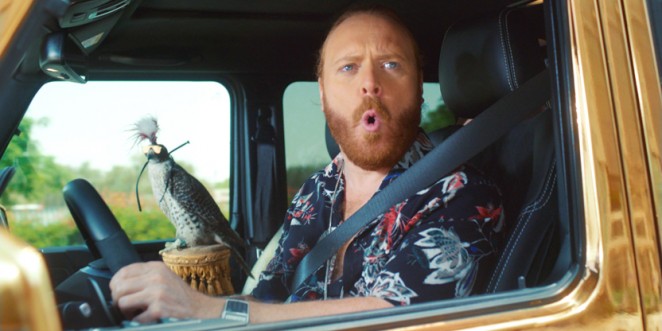 Gary Booker, Chief Marketing Officer, at Dixons Carphone, said: “We’re the only place where customers can compare thousands of tariffs across the major networks including iD and we know customers won’t get a cheaper deal anywhere else as we won’t be beaten on price. Holding our TV and social campaigns until September is a key strategic move for us, to ensure we are creating maximum impact with our audiences for our upgrades and price promise messaging in the lead up to new handset launches and Christmas.”

Matt Charlton, CEO, at Brothers and Sisters, added: “For the fifth instalment in our series with Keith Lemon, we loved the idea of travelling to a place where you can upgrade anything, because as Keith says, Carphone can give you a proper good upgrade deal. Dubai is known for being bigger, better, bling-ier, so what better setting for Keith to upgrade everything he comes across, he even ropes in a sunglasses-wearing falcon!”