JWT Brazil and Coca-Cola build a bridge for Santa Claus

Despite being something of a notorious scrooge amongst my friends and family, I'm still a sucker for a well executed Christmas campaign, and when it comes to well executed Christmas campaigns, Coca-Cola might very well be the kings. Indeed, it's widely rumoured Santa Claus wouldn't even wear red if it wasn't for a campaign first launched in the 1930's, and you can't think of Christmas anymore without picturing the infamous “Holidays are coming” Coca-Cola truck spot. In 2015, with more than a little help from J.Walter Thompson Brazil, Coke have done it again with the creation of “Caravana Produções,” the imaginary production company that invites screenwriters and film directors to create tales about that now beloved Christmas icon; the Illuminated Christmas Caravan (you know the one). 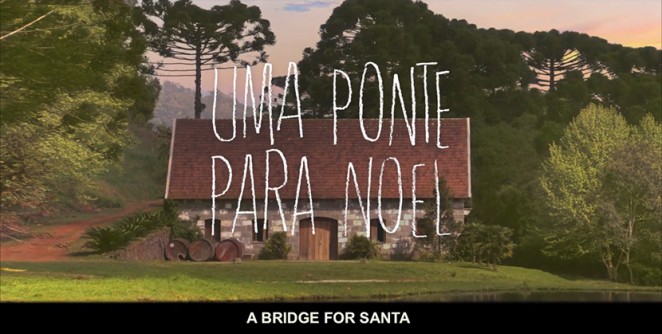 The project debuted this week with the short film “Uma Ponte para Noel” (A Bridge for Santa), which screened yesterday at cinemas all over Brazil. The screenplay, created by author, journalist and moviemaker José Roberto Torero, tells the saga of Mathias, a boy who dreamed of the day Santa and the Christmas Caravan would visit his town, all it lacked was a bridge. The short is directed by moviemaker and founder of Spray Filmes, Fernando Grostein Andrade, whilst the Italian-born Blasco Giurato, was in charge of the photography. The soundtrack was created by Lucas Lima and the cast includes Guilherme Ely, as Mathias, and Milhem Cortaz as the boy’s father. It's a genuine epic that puts earlier efforts featuring the Christmas Convoy to shame. Marcelo Páscoa, Head of Integrated Marketing Communication at Coca-Cola Brazil, said: “More than a campaign, we conceived this project as an entertainment platform. We want to turn Coca-Cola’s Christmas Caravans into the main character of a story that is retold every year, touching consumers all over Brazil across several platforms.” Ricardo John, J. Walter Thompson Brazil’s CCO, added: “Our goal was to bring back the magic spirit of Christmas that Coca-Cola’s Christmas Caravans help revive, always inspiring us everywhere they go.”

A Bridge for Santa

The story of Mathias will also be retold on the streets of Brazil through the parades of the Illuminated Caravans. This year, the Christmas trucks will feature a new decoration to help present the tale and will play an important role in the major regional efforts by Coca-Cola, such as the Natal Luz in Gramado, in the state of Rio Grande do Sul. The show will also go beyond the cinemas and the Caravan parades. With J. Walter Thompson Brazil and Google using VR technology to bring the magic of the Caravans to the digital world, producing a 360º animation created by Zombie Studio, which also co-produced the commercial for the campaign with Spray Filmes. They used the affordable Google Cardboard VR tool (a mount for smartphones, which turns them into a makeshift VR goggles) to create a 360º scene showing different angles and parallel stories in the form of an animation, starting with the moment that Coca-Cola’s Caravan trucks arrive in the town where Mathias lives.

The project debuted this week with the short film “Uma Ponte para Noel” (A Bridge for Santa), which screened yesterday at cinemas all over Brazil

Marcio Garcez, business director at Google Brazil, said: “With the Cardboard, Google hopes that this initiative will bring a 3D environment to the general public in a simple and fun way.” Paulo Garcia, co-founder and Chief Creative of Zombie Studio, added: “We had only seen a few experiments in this segment, but nothing as complex as the scenery that we designed for this huge production, with 40 characters in action, each one of them having an exclusive one-minute animation.” It's hardly the first use of VR in advertising (in fact it appears to have become something of a trend of late), but it's one of the first instances I can think of that doesn't involve extreme sports or luxury cars. Yes it's all very twee, but then, isn't that what Christmas is all about?

I think it’s great that people have such a great chance to watch the short film “Uma Ponte para Noel” (A Bridge for Santa) at cinemas all over Brazil. Moreover, people always have such a great opportunity to find more information about the history of the Coca-Cola Christmas ads in the different sites like this one. Coca-Cola always has devoted millions to their festive campaigns over the years.

Interesting ideas - I loved the specifics , Does someone know where my business could possibly locate a sample Calendar form to complete ?

timeTo is an organisation that focuses on providing regular training for agencies and employees as well as support for sexual harassment in the workplace. Within the training supplied by timeTo there is emphasis on the intention behind the...