Two icons of the weekend are partnering to deliver a feast of great food and fantastic entertainment to the nation on Saturday and Sunday nights. Just Eat, the leading marketplace for online food delivery, is to become the new broadcast sponsor of one of the UK’s biggest TV programmes, The X Factor. The new on and off-air sponsorship deal will see Just Eat own extensive branding around all formats of the show. At the heart of the sponsorship will be the heroes of the Just Eat business, its 27,600 restaurant partners, which currently serve more than 100 different types of cuisine to over nine million customers across the length and breadth of the country.

In the coming months Just Eat is going to launch “Chef Factor,” a nationwide hunt for real chefs to star in the TV idents that appear at the beginning and end of commercial breaks during The X Factor. Just Eat wants to take these unsung superstars of the kitchen and put their passion for food - and talent for singing - in the spotlight. Just Eat will also offer UK customers exclusive access to the show, including behind the scenes content and ticket giveaways throughout the series.

Barnaby Dawe, Chief Marketing Officer of Just Eat, said: “We are thrilled to be partnering with such an iconic TV programme. It’s a great fit for both brands as we each play a key role for millions of people every weekend. Last year over 39 million people watched The X Factor, so the partnership will give the Just Eat business a fantastic opportunity to reach an even broader audience. We are especially pleased that we can use The X Factor sponsorship as a platform to celebrate our restaurant partners and drive orders to all of them. To have the opportunity to showcase the breadth and diversity of their cuisine – as well as their singing talent – is incredibly exciting for Just Eat.” 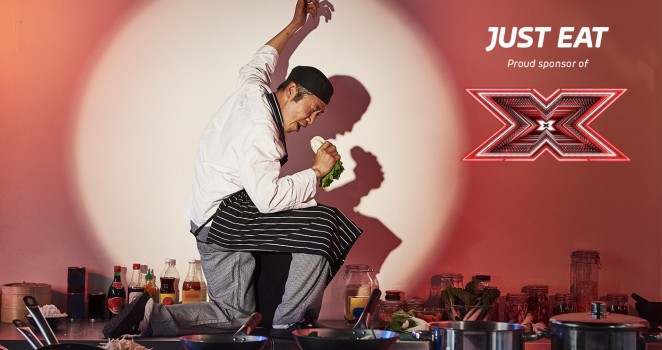 Simon Daglish, Deputy Managing Director, Commercial at ITV, added: “The X Factor is one of the biggest shows on TV and Just Eat were a big part of the last series as sponsors of the official app. I’m delighted that they will be extending that sponsorship for the new series and joining together two brands well known for creating fantastic weekends.”

The new deal follows Just Eat’s 2016 sponsorship of the official X Factor App. The App was downloaded over 2.3 million times, with viewers benefitting from the instant takeaway ordering functionality. It supported the relaunch of the Just Eat brand last autumn under the tagline “Find Your Flavour.” Built on Just Eat’s market leadership, the brand’s new direction establishes Just Eat as the food ordering platform for any occasion. The new partnership will go live when Series 14 of The X Factor airs later this summer. The sponsorship was negotiated by Just Eat’s media planning and buying agency, M/Six, and the creative platform is being developed by Karmarama.

The X Factor remains one of ITV’s most popular entertainment shows but ratings have fallen significantly in recent years and lagged behind its BBC rival Strictly Come Dancing in the Saturday night audience battle in autumn and the run-up to Christmas. Last year’s final, in which Matt Terry won the competition, attracted an average of 7 million viewers (down 15% year on year) its worst audience on record for a final since the show first launched in 2004. Last year ITV agreed to renew The X Factor until 2019 and earlier this year debuted its first series of The Voice, the singing talent competition bought from the BBC.