Ahead of the UK General Election this Thursday (08/06/17), new online search trends analysis research has reveals that Labour was the most searched for political party by the UK public from April to May 2017. Captify, a Search Intelligence driven advertising technology company, which analyses 33 billion online monthly searches, found that from the 1st of April until the 31st May 2017:

The two frontrunners were followed by:

Overall in May, both Jeremy Corbyn (Labour) and Tim Farron (The Liberal Democrats) experienced the largest increases in the number of searches performed by the UK public online for political leaders. Captify’s data found that:

In addition to this, 94% of online searches for Theresa May in the same month were negative (versus 6% positive). This was contrasted by 68.6% of searches for Jeremy Corbyn being positive (versus 31.4% negative).

Since the election was announced in April, Captify also analysed online searches by the British public to reveal the top three political issues associated with five political parties in Britain:

Finally, Captify also measured which were the most researched political party manifestos since the election was called. It found that the public searched the most online for Labour’s manifesto (54% of all searches), followed by The Conservatives (41%), and The Liberal Democrats (5%). 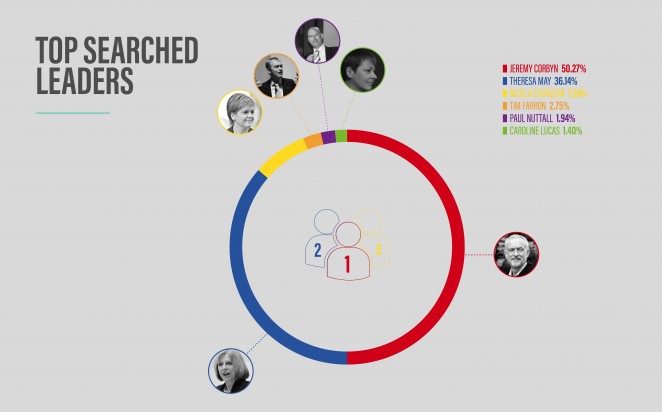 Of course, all of this only data really onlt serves to reinforce what we already know. Labour have surged dramatically in opinion polls in the last couple of months due in no small part to both a rise amongst voter confidence in jeremy Corbyn (particularly amongst young people) and a shift in confidence levels towards Theresa May, who has ironically been kicking here heels a little throughout the month that bares her name. Ultimately, however, it's all meaningless unless you get out and vote on Thursday. So please keep that in mind, even if political fatigue has understandably set in of late. We're almost at the finish line!