Commissioned by RKCR/Y&R, Jelly London’s in-house animation team; The Kitchen, has produced a series of quirky animations to promote Marks & Spencer's latest Shwopping campaign to raise money for Oxfam. Featuring Absolutely Fabulous star, Oxfam ambassador and legitimate british icon, Joanna Lumley, the online campaign invites customers to leave their old and unwanted clothes at Marks and Spencer stores to be resold or recycled by Oxfam. The stylishly animated films show items of clothing that have been donated via the “Shwop drops,” morphing into good deeds around the world, including clean water and business training. 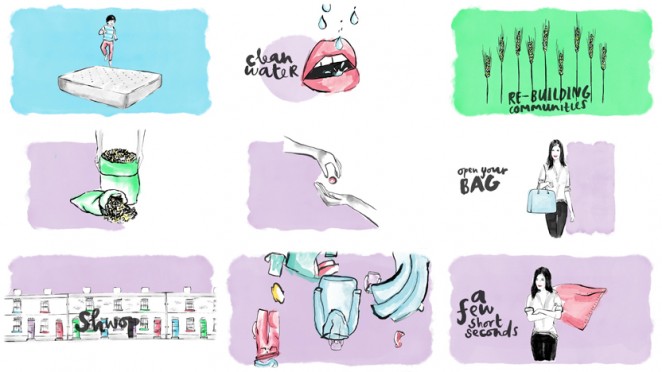 Sam Burton, Head of Animation at The Kitchen, said of the videos: “Initially we produced a thumbnail storyboard to create a timing animatic to work alongside the brilliant VO from Joanna Lumley. Our next stage was to begin drawing out the cel animation using flash. This gave us the power to sketch out the morphs and experiment with how the film flowed, and see how each scene would transition to the next. Once the sketched version of the animation was approved by the client we took it into Photoshop. We were then able to use a selection of bespoke brushes to paint each frame. This technique gave us the desired traditional hand painted look that the client was after. We created the line-work and textures separately, which allowed us to colour up the tone and washes in the background. Typography was then added to highlight key parts of the story.”

“By tidying your wardrobe regularly, you will not only get a tidy mind, but also a clear conscience by Shwopping” Joanna Lumley

M&S: Do Something Extraordinary in 15 Seconds

The videos are just a small part of the ongoing Shwopping campaign, which has been a monumental success for M&S, thanks in no small part to the combined efforts of RKCR/Y&R and Jelly London. As another recent part of the campaign, M&S also conducted a survey, which found that, on average, women spend a whopping six months of their working lives simply deciding what to wear. The poll found that the huge amount of time spent staring at their clothes trying to make a decision has led to 62% of women suffering irrational tantrums over not having anything they want to wear. And while men might not be as bad, they aren't immune, spending and average of 13 minutes a day (the equivalent of three days a year) deciding what to wear. One in five men even own up to throwing clothes around the room in frustration when they can't find anything to wear, with more than a third succumbing to a self-described fit of wardrobe rage.

Whilst the survey might seem oddly humorous on the surface, it was actually commissioned in order to shed light on a real issue and encourage people to donate their clothing to the cause. The study of 2,000 Brits found that the average wardrobe contains 152 items, but only 44% per cent of these are worn regularly. On average, 57 items are also left unworn, 16 items are only worn once, and 11 still have tags on, so have never been worn at all! In fact, 1 in 20 of us have over 50 items in our closets with the tags still on, while 1 in 8 own more than 300 items of clothing overall! Despite these findings, one in 20 adults will complain that they have nothing to wear at least once a week. The underlying point here is obvious; donate your clothing to the Shwopping campaign, and you'll not only be helping a worthy cause, but you'll be saving yourself from any future wardrobe rages. 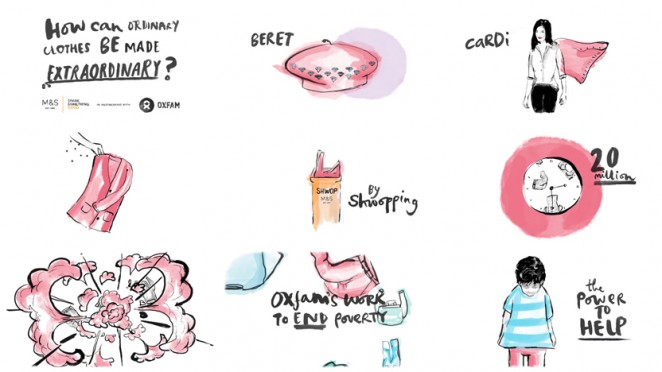