With a good portion of the world working from home or in lockdown, one can guess the events industry isn't doing too well right now.

But you would be wrong to assume that the industry hasn't been working behind the scenes to envision new solutions, making events and meetings work just as well from home as they would in person. Like most sectors, this corona-crisis has forced the events industry to adapt or die, and you'd be surprised to find out in which ways events have been shaped by the 2020 lockdowns.

Not knowing too much about it ourselves, we asked TrueEvents Director Patrick Lambert to tell us more about how the industry has managed to survive a year like no other. 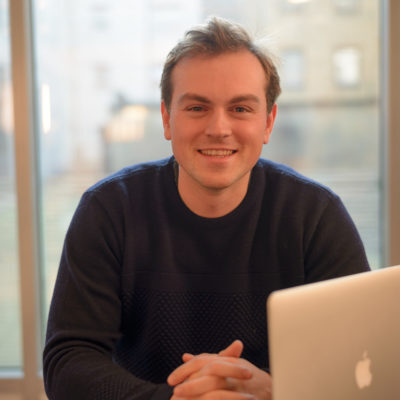 Down but not out: how the events industry is adapting virtually to the new normal

The multi-million pound events industry suffered devastation when coronavirus struck, but despite being caught on the back foot it has adapted and evolved rapidly, paving the way for a virtual-hybrid future.

When they realised that all the huge events they had planned were to be cancelled, the initial reaction of many events organisers was panic and despair, as they faced the utter obliteration of their business model.

Some organisers were in denial about the enormity of the change, that they could postpone events until later in the year, or cancel and do them next year instead. Some with events coming up in the summer believed they might not even have to postpone.

Others realised this was not going to happen and quickly started using available tools and platforms to get their events online. We saw Zoom shares rocket at the beginning of the year, along with a 2000 percent year-on-year increase in users. In part this was because Zoom provides a feature where you can host webinar-style sessions with cheap paid access and even now, small independent businesses are still using it. But this was not enough for bigger events.

The challenges of remote webinars

At first there was delight, as they had simply managed to get their events online. Attendees were patient with the switch to a much more basic and uninspiring virtual event experience, because they were happy just to be there.

But then after a couple of months, they got tired of seeing people talking to a webcam in their living rooms, and it became tedious. The problem was that we have become used to very high production values in everything we see online. Even your average YouTuber produces videos that would have looked incredible a decade ago.

Also, a typical live event has multiple cameras on the person speaking and big screens around the stage, so you could cut between different camera angles to keep it exciting. But now you had one camera in a static position with someone who may not be very well lit, and who may not have dressed up much because they are at home.

From a viewing perspective it becomes monotonous and disengaging, and attention spans became a big issue. A talk that goes on for an hour kinda drags, and when the industry pivoted online straight after losing physical events many forgot that, scheduling long and dull sessions instead.

Add to that the distractions of being at home and you must work hard to keep someone’s attention. They can easily just put the big speech on mute and wander to the fridge or make a cup of tea. 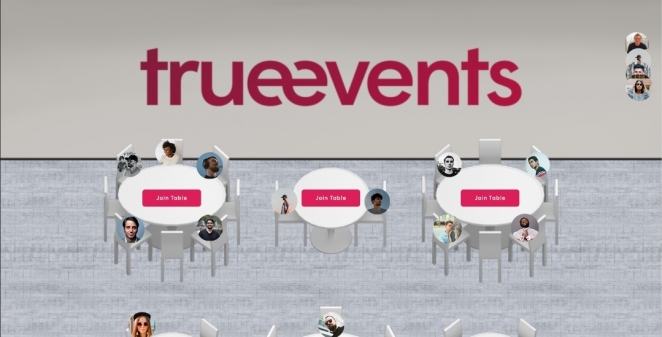 But the flipside is that a huge number of people, a whole generation of people who did not grow up with this technology suddenly found themselves using Teams and Zoom on a daily basis. The idea of going online has become more natural and we can therefore start to push the boundaries a bit more, to make it more creative and enjoyable.

Despite the challenge around production values, there was a realisation that events organisers were sitting on a huge opportunity to have more people viewing their content. Attendance rose rapidly, frequently far higher than they would have had at a physical event. The last virtual event we ran at TrueEvents, for example, had a 500 percent attendance increase compared with the physical version, because the content is suddenly available to anyone with an internet connection.

But as attendance went up and engagement went down, the onus has been on event companies to produce an experience that really draws people in. My company has a background in 3D visualisation, animation, VR and production, so our fundamental role has always been to take a complicated story and tell it quickly and effectively. We focused on engaging people, grabbing their attention and giving them the story quickly and effectively.

The industry is split between those that have gone for a very functional web platform approach and those that seek to create an experience, combining the ease of use of a web experience with being able to navigate and walk around the event virtually.

The challenge is in making a virtual event more than just a webinar. There was a big concern about whether networking could be replicated virtually, but the people I talk to in the industry have realised it could actually be more effective online. It gives people access to those higher up in companies, because they rarely get caught in an awkward conversation.

You never get pinned in the bar by somebody who just wants to keep asking you questions. It is like speed dating, you can just leave the virtual room. As a result, more people have been quite willing to come in and have a few more chats. The challenge has been finding a system that would enable those conversations. Sometimes they need to be group discussions, but often business also gets discussed one-on-one.

Creating an online breakout room environment with different sized virtual tables and different routes to tables allows you to enable natural human behaviour, for example. People can invite others into the room or just see someone sat at a table who they decide to join for a video chat, because they seem interesting. Once they are comfortable with the platform, the actual act of networking is less pressured and stressful and slightly more comfortable than it was when you got dumped in a room, given a glass of wine and off you go. 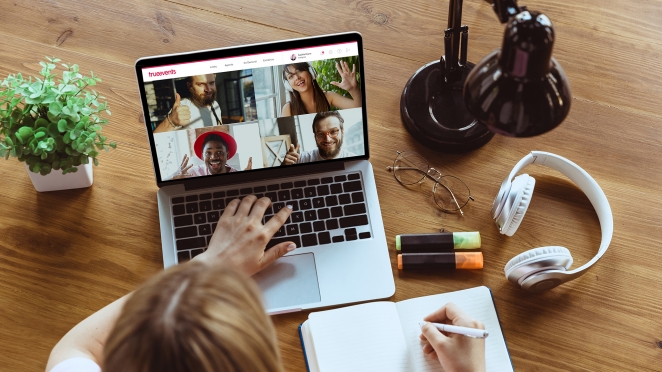 From physical to virtual

Creative companies have been racing to simulate every aspect of events in the virtual realm. That means enabling keynote speeches, breakouts, networking opportunities and exhibition halls where you can exhibit products you want to sell in a 3D virtual environment. It could be as abstract as music licences or as physical as umbrellas, but people are now using these events as a virtual showcase.

You could, for example, view a map of the hall to get a feel for the different stands from the exhibitors, then see their booths in 3D with products, brochures, videos, and all the content they would have on the walls of a physical booth. You could interact with all those elements – watch the videos, flick through the brochures, read about the products. The final part is to video chat with a company salesperson where they can share the booth with you, guide you around and tell you a bit more about the products on offer.

We also saw an interesting opportunity from companies that had been serving live physical events with apps. People who provided voting apps for audience members at physical events realised that they could join the virtual world because they would immediately increase audience engagement online.

Virtual events have also temporarily alleviated several issues with physical events which were not being addressed: travel costs, access for disabled people, road congestion, and unnecessary pollution. We saved more than 3.5 million air miles at one virtual event this autumn. As the world becomes increasingly conscious of environmental impact, that will continue to be an important factor and it may well mean that we see more events that are deliberately smaller and locally focused, with the international reach provided online.

This period where people can only host virtual events has had two apparently opposite effects. Firstly, it has made everyone eager to host physical events again because we would all like to be outside enjoying those social interactions. Secondly, it has left a permanent virtual legacy because online access to an event extends the reach globally and allows organisers to host it 365 days per year, if they wish.

The events industry after lockdown

There is a massive realisation of what can be achieved with online events, and after lockdown is over, a lot of this will remain in some form. The result of this painful adaptation and evolution is very likely to be hybrid events – a combination of the physical and the virtual. Once physical events are possible again (and despite the vaccines we do not know when that will be), organisers will be in the position of being able to extend their reach permanently, to welcome far more attendees by allowing virtual access.

The virtual experience, hugely upgraded thanks to this period of forced evolution, will compliment the physical event by expanding and amplifying it. But the physical will also enrich the virtual, by supplying far richer and more exciting content.

The real test for virtual events right now will be in repeat attendance. Many people were willing to attend virtual events this year out of curiosity, wondering whether it could be a rewarding experience. Those organisers who have been willing to go the extra mile in engaging their audience through the creative use of technology will reap the rewards, as audiences come back for more in even greater numbers.