Grey London and McVitie's release the cutest app ever!

United Biscuits has launched two brand new initiatives this week as part of its adorable “Sweeet” campaign, which uses cute and cuddly critters in imaginative ways. The first is the latest ad in the iconic sweeet series, but the second marks the first digital initiative of its kind for Britain’s best-loved biscuit brand. The new advert, an extension of the current two year campaign, has been created to support McVitie’s Chocolate Digestives. It sees the return of the famous British Blue kittens, who now also star in the brand new McVitie’s iKitten app, an augmented reality activation created in partnership with Grey London, which lets consumers create, personalise and share their own McVitie’s kitten via their smart devices and some pretty nifty AR technology, which brings the kittens to life in your own home, or wherever you are for that matter.

iKitten – What it can do

The iKitten app, created with the help of GreyPOSSIBLE, and with media planning from MEC, can be downloaded to smartphones (via iTunes, App Store and Google Play) for free, and is activated using the logo found on a pack of McVitie’s Chocolate Digestives, or by downloading special marker cards from the official McVitie's website. Users can activate by simply pointing their mobile at a marker to summon their very own British Blue kitten to play with digitally in their surroundings. Consumers will also be able to use the ‘blue screen mode’ which allows you to dress the kitten up in cute outfits and props such a crown or sombrero and giving the kitten its very own cat bed to sleep in. 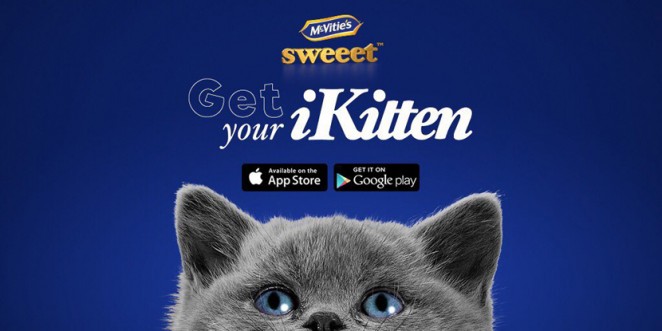 UB Sweet Biscuits Marketing Director, Sarah Heynen said: “After the fantastic response to our McVitie’s sweeet master brand campaign launched in 2014, we’ve decided to refresh the successful McVitie’s Chocolate Digestives advert by creating a new story, which continues to celebrate the everyday biscuit eating moment, made that little bit better with a Chocolate Digestive. The kittens are back to evoke the same feeling and emotional response to that of eating a simple McVitie’s biscuit, and we’re excited to give everyone the opportunity to have their very own sweeet virtual kitten with the launch of the McVitie’s iKitten app.”

For the new ad, Grey and McVitie's partnered with Channel 4’s creative solutions team. It premiered in what was billed as the “Sweeetest ever ad break,” featuring some of the most adorable stars from ads currently on British screens. The bespoke ad break aired exclusively on Friday 19 February during the first episode of the new series of Gogglebox on Channel 4. The slot began with a co-branded 10 second intro and outro that revealed the McVitie’s kittens frolicking through a sea of the iconic C4 blocks. 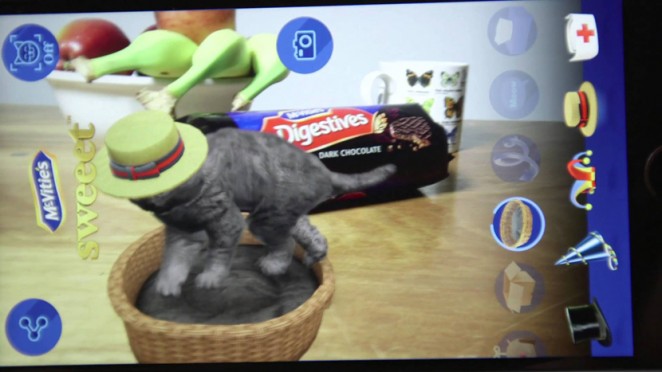 These unique elements were created especially for the campaign in conjunction with Channel 4’s in house creative team, 4Creative. Danny Peace, Agency Principal at Channel 4 said: “It’s been great to work with McVitie’s on this innovative and highly collaborative partnership. The sweeetest ever ad break promises to be both entertaining and memorable and is a perfect example of how brands can work with Channel 4 to create unique creative for their campaigns.”

The new 30 second ad set in student halls, follows the story of a nervous young man during his first day at university. As other students enter the room, he reaches for a packet of McVitie’s Chocolate Digestives found in his suitcase, a heart-warming surprise from mum to help him on his first day. As the packet is unwrapped to share with his new friends, the moment transforms to reveal a series of cute, snuggly British Blue kittens, set to the catchy theme tune of the 1984 film Beverly Hills Cop, “Axel F.” The students and the audience are transported to a world of snuggly kittens for a split second, before they crunch into a Chocolate Digestive treat, and feel that chocolatey snuggle. The creative behind the partnership has been created by McVitie’s in partnership with Channel 4 Sales’ in-house creative strategy PL4Y.