As part of the third annual Everywoman Forum: Advancing Women in Technology, over 550 business and technology leaders gathered at the London Hilton on Park Lane last Thursday night (February 9) where the winners of the 2017 FDM Everywoman in Technology Awards were unveiled. Supported by techUK, this is the UK’s largest awards programme celebrating achievements and championing the advancement of women in technology and STEM careers. The evening’s 12 winners included the founders of a digital fashion service that offers a truly personalised shopping experience to over 5 million women, a 16-year-old app developer with self-taught HTML coding skills and a university professor who developed sustained drug release depots for ovarian cancer treatment. Together they show the breadth of achievements by women in the technology industry over the past year. The need for the tech industry to engage with women has never been more critical.  74% of young girls express an interest in STEM subjects at school yet only 18% pursue these subjects in higher education.  The awards play a crucial role in creating and showcasing successful role models.  By highlighting their remarkable achievements, the awards aim to inspire others following in their wake to ensure that women, making up 49% of the workforce, influence bridging the digital skills gap and fill a significant number of the estimated 1.4 million technology jobs that will be available in the UK by 2020. 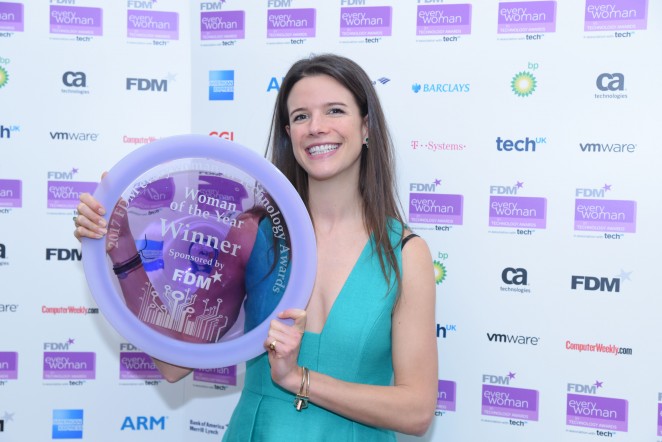 The 2017 Woman of the Year is Emily Brooke, CEO and Founder of Blaze, from London, who made the pivotal decision to give up an Oxbridge education to pursue her ambitions in design. With funding from Kickstarter she created her first product, the “Laserlight”, a detachable front light that projects a laser beam image of a bike on the road ahead, alerting vehicles and pedestrians to the presence of a cyclist.  Since developing her flagship product in 2014, the “Laserlight” can be found on all 13,000 Santander Cycles in London and is shipped to over 65 countries. Blaze is now running product trials on the New York Citi Bikes with ambitions to work with other global cities on their cycling strategies in the future. Her outstanding achievements in innovative product design have resulted in her being named as Woman of the Year.

Rising Star Award, sponsored by T-Systems: Gabrielle Corria, Resource and Recruitment Lead, CGI, from Bridgend who started her career in IT at just 17 years old. She works tirelessly to help increase the number of applications for entry-level roles and has a fantastic ability for finding technical talent. Gabrielle actively engages with young women to promote the various job opportunities in CGI all whilst making sure she gives back to her community.

Software Engineer Award, sponsored by American Express: Maxine Glennerster, Senior Developer, Deloitte Digital, from Belfast. By introducing a “money management” app, she has significantly increased the amount of customers the bank gains and retains.  In addition to this she is already paving the way for those coming up behind her, with the introduction of the Brightstart scheme to Deloitte Digital - a school leaver’s programme where students have the opportunity to work alongside gaining a degree in computer science.

One to Watch Award, sponsored by CA Technologies: Ellora James, Wick High School student, from Caithness, Wick. At just 16 years old Ellora is self-taught in HTML and CSS coding and now teaches these skills to other students through her “Apps for Good Course” mentoring programme.

Leader Award, sponsored by BP: Vicky Higgin, Head of Corporate Information Services, National Grid, from Warwick. Vicky has created nearly £6m of savings for the company and increased customer engagement scores from 5.8 to 7.5 by actively embedding lean principles methodologies into her teams.

Academic Award, sponsored by Dell:  Semali Perera, Professor of Chemical Engineering, University of Bath, from Bath. Semali is a world-leading researcher in the design, development and modelling of novel-structured materials and has also developed sustained drug release depots for ovarian cancer treatment and the removal of carbon dioxide for NASA space applications.

Innovator Award, sponsored by Equiniti: Kate Newhouse, CEO, Doctor Care Anywhere, from London, who created the digital healthcare service with the aim to offer a smart tech savvy way for people to manage their health in a digital age. Customers include 1.2 million individuals and 700 large corporates acquired through an exclusive partnership secured with AXA PPP Healthcare.

Entrepreneur Award, sponsored by ARM Holdings: Sarah McVittie and Donna North, Co-Founders, Dressipi, from London. This digital fashion service allows shoppers to create their very own “Fashion Fingerprint” online through answering a detailed questionnaire, which can then be used to search and browse some of the largest retailers including Nike, John Lewis and Marks & Spencer - a truly personalised shopping experience that reduces return rates for the company and increases overall customer satisfaction.

Digital Star Award, sponsored by CGI: Chi Igboaka, Global Head of Performance Marketing, Travelex, from London, who was promoted to a global role after just nine months and is responsible for setting the digital marketing agenda for Travelex. The business has seen a colossal shift in performance marketing after she developed what is called “the digital marketing centre of excellence”.

Inspiration Award, sponsored by VMware: Sophie Newton, COO, Brainlabs, from London, who has helped grow the specialist search and analytics agency from seven people to 75 in just three years, securing partnerships with companies such as Deliveroo, Domino’s, JD Sports and Premier Inn along the way. 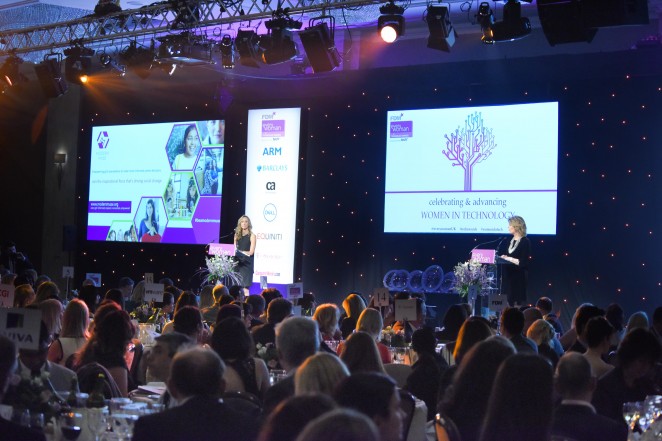 Maxine Benson MBE, co-founder of Everywoman, said: “These awards show the extraordinary female talent that exists in the UK’s technology industry, reminding us that women play a vital role in its growth and success, no wonder it is so well loved and supported in the industry. With research telling us that gender-balanced teams provide better outcomes, there has never been a better time to applaud their success and demonstrate their impact, thereby encouraging younger generations to embrace the opportunities offered by a STEM career.” Secretary of State for Culture, Media and Sport, Karen Bradley, added: “I’d like to congratulate all the nominees and winners who've been recognised for their achievements in the FDM everywoman in Technology Awards. I hope their stories inspire the next generation of female entrepreneurs and pioneers to help create the diverse workforce from across the country we need to remain one of the world's leading digital economies.” 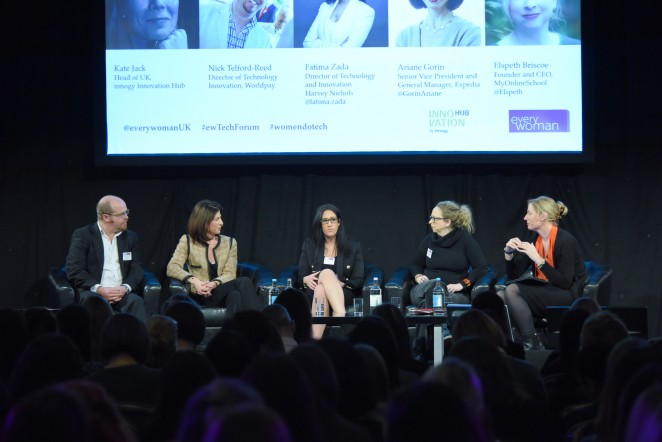 As mentioned earlier, the 2017 FDM Everywoman in Technology Awards took place at the climax of the third annual Everywoman Forum: Advancing Women in Technology, which welcomed over 600 delegates from around the world who came to hear from some of the brightest and most revered figures in the international technology world last week. Hosted in London by everywoman co-founders Karen Gill MBE and Maxine Benson MBE, the event was an early sell-out, but a live stream enabled hundreds more to participate in the day, with Cisco Systems’ Poland headquarters among scores of satellite events in tech offices around the world.

Opening the forum was Karen Quintos, Executive Vice President and Chief Customer Officer of Dell, a unique family of businesses that provides the essential infrastructure for organizations to build their digital future, transform IT and protect their most important asset, information. A member of the executive leadership team, Karen flew in from the Texas-based headquarters to share her industry insight and personal experience. She remarked: “As an industry, we need to do more to encourage diversity in the technology sector. A diverse team is a stronger team, and technology is the future. We have an incredible opportunity ahead of us to truly drive human progress through technology, and we need the strongest team possible to build this digital world that will open new markets, reshape industries and improve lives. The everywoman Forum provides an important venue to move the diversity agenda from discussion to action.” Joining her was Nick Jenkins, founder of moonpig.com and currently a panellist for the hit BBC show Dragons’ Den, who shared his journey of disrupting the marketplace and growing a global brand.  Moonpig.com rocked the tech world when it launched in 2000 and quickly captured the public’s imagination.  Defying the tech bubble burst, it captured 90% of the UK greetings company market in just seven years. 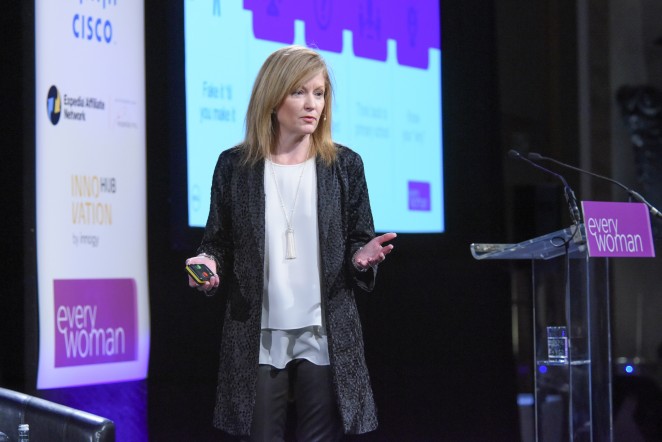 In addition to the high-profile keynote speakers, delegates heard panel discussions around the risks and rewards of disruptive innovation featuring senior figures from Worldpay, Innogy Innovation Hub, Harvey Nichols, Expedia and MyOnlineSchool, who shared their respective approaches to decision making and why playing it safe is the biggest risk of all. A second panel discussion, considering interaction and cultivating relationships in the digital age, featured representatives from Direct Line Group, ARM, VMware and I Like Mondays. Panel members looked at the change in how we interact with each other as technology evolves, as well as how individuals and brands need to adapt their communications to reflect this. Further sessions around the application and benefits of mindfulness in business followed along with a discussion, on how to attract and retain Generation Z. This session which was supported by data insights from Ipsos MORI, talked about how the generation born after millennials, who are far more in tune with technology and social media, will provide the growing pool of talent required by the global technology industry.

Maxine Benson MBE, remarked: “Today has been momentous for women working in and experiencing technology around the world. It is very exciting to be able to bring together so many talented individuals to share their insight and experiences. It is particularly gratifying to use technology to enable our friends and peers in Poland and in numerous companies across the globe to participate in the day.  Together we can demonstrate the vital role that women play in technology globally.” Ron Kalifa, Vice Chairman at Worldpay, added: “Worldpay is delighted to have sponsored the 2017 everywoman forum, a great event for tech talent in the UK with unmatched networking opportunities. Worldpay supports a diverse and inclusive workforce and we’re constantly looking for ways to connect with women working in and outside of the tech industry.” 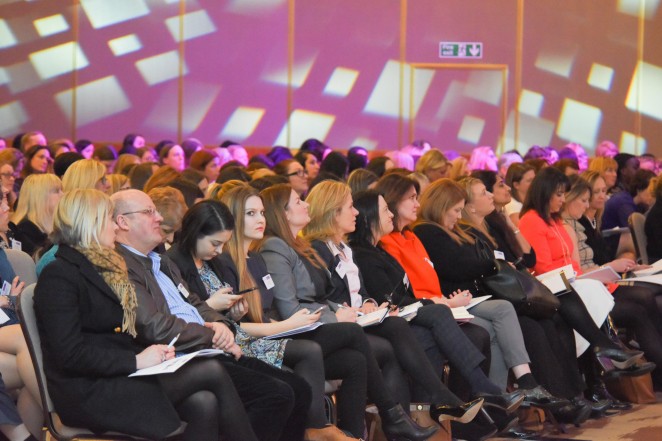