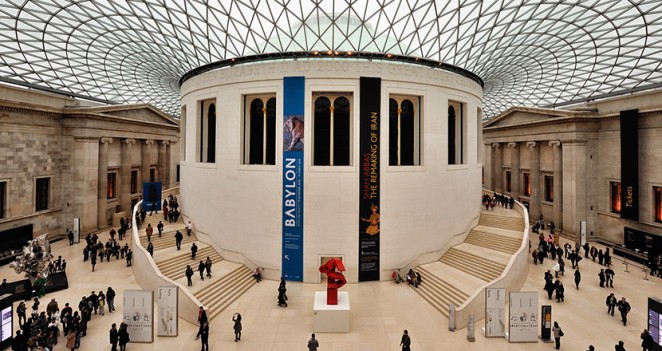 Between the 8th and the 9th of August, visitors to the British Museum will be invited to step a virtual foot inside a 4,000-year-old Bronze Age roundhouse with the launch of the London museum’s first ever virtual reality weekend. By teaming up with Samsung and visualisation studio Soluis Heritage, the museum has been able to recreate a Bronze Age home in a bespoke dome structure large enough for groups of five to enter and experience with their own eyes what it would have been like to live 4,000 years ago. The exhibition uses state of the art Samsung Gear VR headsets, tablets, and a complex projection to create different avenues through which visitors can explore an immersive world featuring 3D scans of three objects from the museum’s collection that will be virtually placed in their original settings. Many mysteries still surround the objects, so curator Neil Wilkin will be on hand to offer talks to encourage visitors to check out the real objects once they’ve experienced them virtually. Wilkin argues that all three objects could have been found in a house of the period, sparking storytelling and reminiscence by the fireside.

The objects include a Beaune Dirk dagger and two interlinked gold bracelets discovered in Gloucestershire. The most interesting object, however, is an unassuming twist of bronze thought to be one of around 50 “Sussex Loops,” which were believed to be bracelets, until a French postgraduate student thought they would be too uncomfortable to wear. Wilkin now believes they may be cloak fasteners, and visitors will be invited to try a replica and give their own opinions. All three objects have been 3D scanned as part of the museum’s Micropasts project, where thousands of people across the world accepted the invitation to help online to transcribe information and model museum objects. This weekend, they’ll be placed inside the VR roundhouse that visitors will be able to explore all weekend. Samsung Gear VR headsets will be made available to visitors over the age of 13, and there will also be Samsung Galaxy tablets available for use.

This weekend, visitors to the British Museum will be invited to step a virtual foot inside a 4,000-year-old Bronze Age roundhouse

The weekend is the institution’s first experiment in bringing the virtual reality and digital interpretation work up into the main museum, which has been ongoing since 2009 in the Samsung Digital Discovery Centre located in the basement of the Great Court. The technology has been particularly popular with younger visitors, as more senior museum staffers admitted to finding the VR headsets discombobulating. Younger visitors have undoubtedly had more experience with the technology, thanks to their exposure to modern video games, so for example, the flickering fire and changing levels of light shining through the open door in the virtual world won’t seem as foreign to someone who has spent around 100 hours engrossed in “Grand Theft Auto 5,” as it will to someone who last sat down with a games console around the time Nintendo and Sega were at each other’s throats. 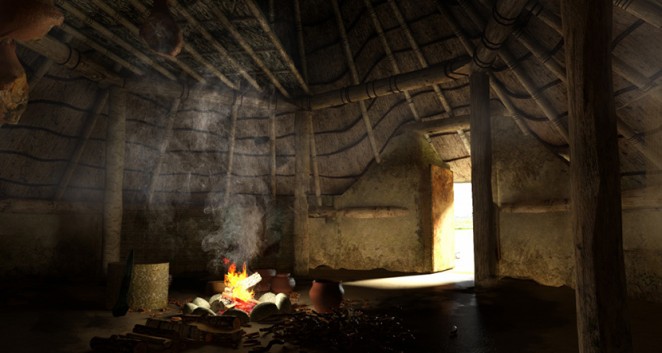 What VR headset wearers will see at the exhibition

Wilkin said: “The technology is particularly useful for the Bronze Age, which is a difficult period for visitors to engage with. The Bronze Age people are very annoying to archaeologists because they tended to scour the sites bare and burn their houses to the ground when they abandoned them, and bury their objects in pits up to a mile away.” Martin McDonnell, chief executive of Soluis Heritage, added that the billions being invested in gaming technology had the side effect of making it far more available for heritage use, with cardboard headsets into which a cheap smartphone could be slotted already a reality: “We’re seeing the rapid democratisation of what had been very exclusive technology,” he said.

By teaming up with Samsung and visualisation studio Soluis Heritage, the museum has been able to recreate a Bronze Age home in a bespoke dome structure

British Museum head of digital and publishing Chris Michaels also added: “The British Museum is constantly looking for new opportunities to innovate in the digital space. This project gives us the chance to create an amazing new context for objects in our collection, exploring new interpretations for our Bronze Age objects.” The Virtual Reality Weekend at the British Museum, London takes place from 8 to 9 August. Admission is free.

A 3D scan of a Bronze Age sword