In light of this, we thought we'd get to know our shiny new duo by asking them a whole host of questions... enjoy.

What did you guys study? How did you get into illustration/animation?

Abel studied Media in Madrid before moving to London and Katie studied French and Politics before moving to Barcelona. Each of these moves signalled a big change in our careers: Abel started working in animation and Motion Graphics in London and later Katie developed her illustration and embroidery brand in Barcelona.

How recently have you formed Cabeza Patata and why?

We started Cabeza Patata in January of this year (the name came in February and the website in March!) as a bit of a coincidence. Katie had been developing her character style and one day Abel did an experiment adding volume to one of the characters in 3D. Since then, we couldn’t stop! We’ve been producing almost an illustration a day and the style has been evolving with us, both in 2D and 3D, as we’re learning from each other. 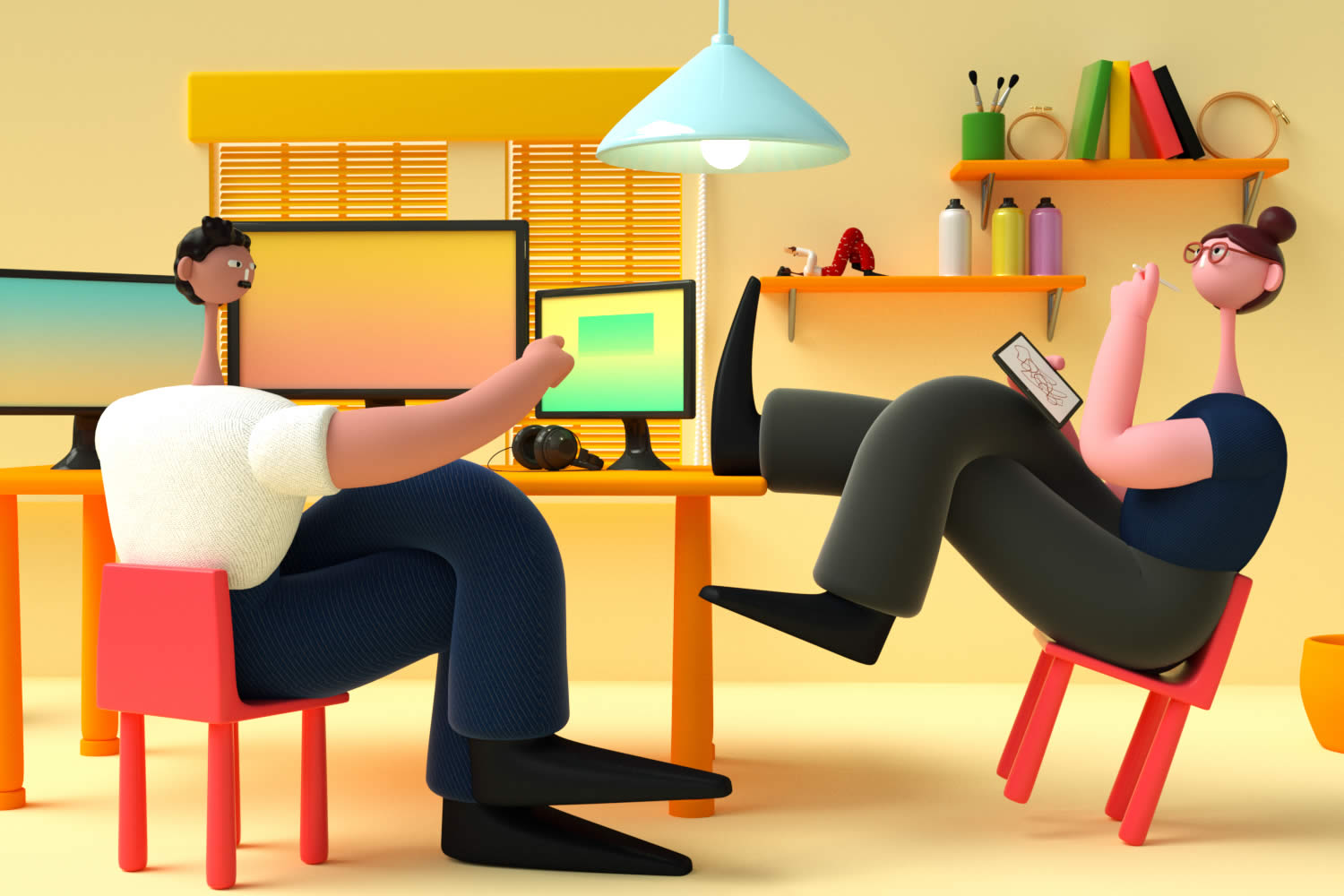 We’ve got to ask… Why potato head?

If only there was a proper answer to that! Mostly just because it sounds funny and light, fitting with our character style, and people always remember it. Also, we love potatoes.

Each of your skillsets are quite different to one another - do you think this is what makes you two work so well together? Do you run into any difficulties?

To begin with, this was an advantage because it meant we were creating a style that, because of the mix of skillsets it requires, wasn’t completely in either of our comfort zones. But as the project and style is developing, we realise that we don’t want to keep our skills separate. It’s better for both of us to be able to understand and be part of the whole process and to add our own touches all the way. Abel has been increasingly part of the 2D illustration and Katie has been doing a fast-track 3D course, learning the Cabeza Patata way. 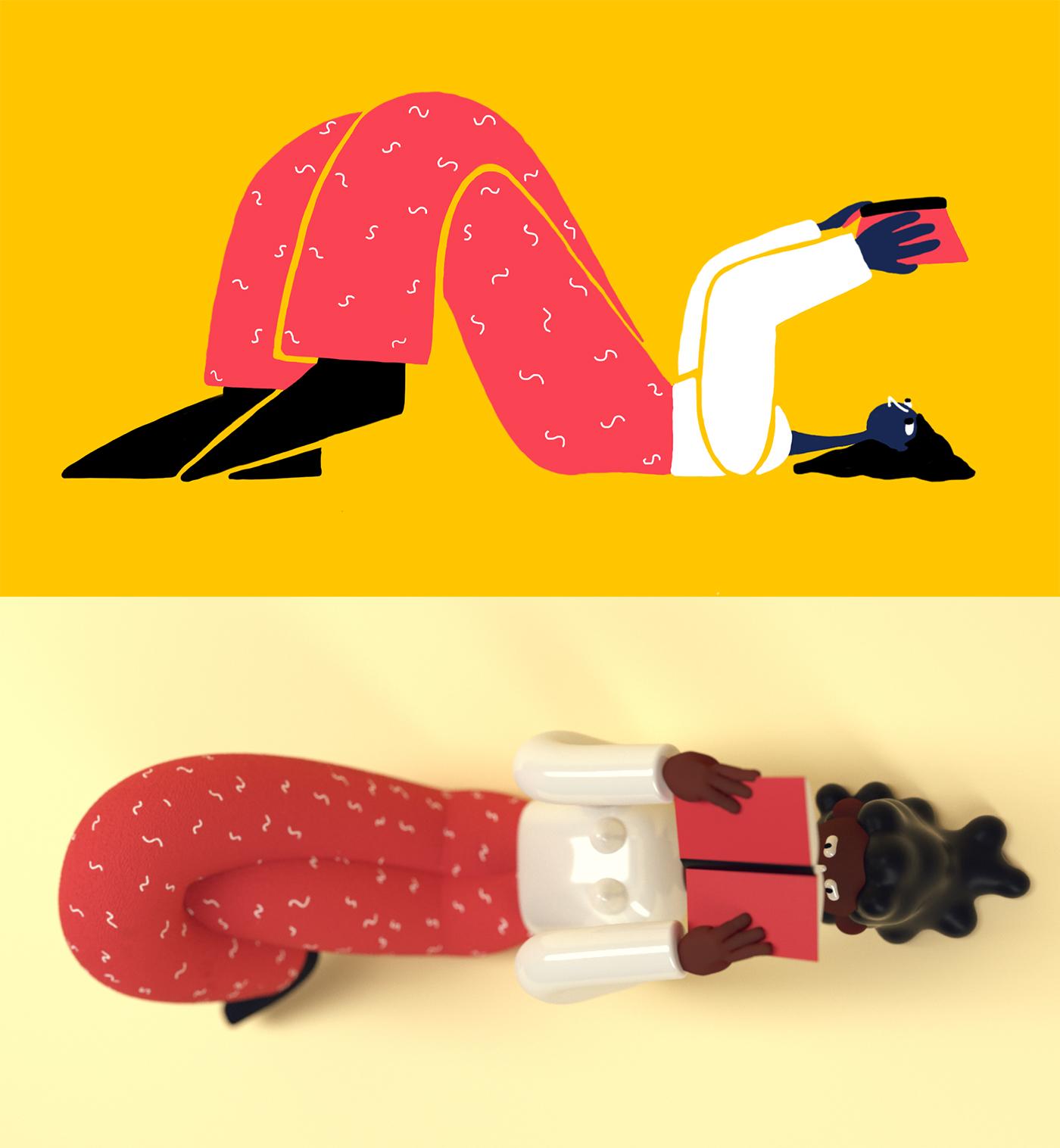 Katie - what got you into Craft / embroidery?

I’ve been craft obsessed since I can remember but I never imagined it could lead to a job. I started embroidery using the 36 Days of Type challenge as a way of learn and practicing as much as possible and, most importantly, showing my work publicly on Instagram. 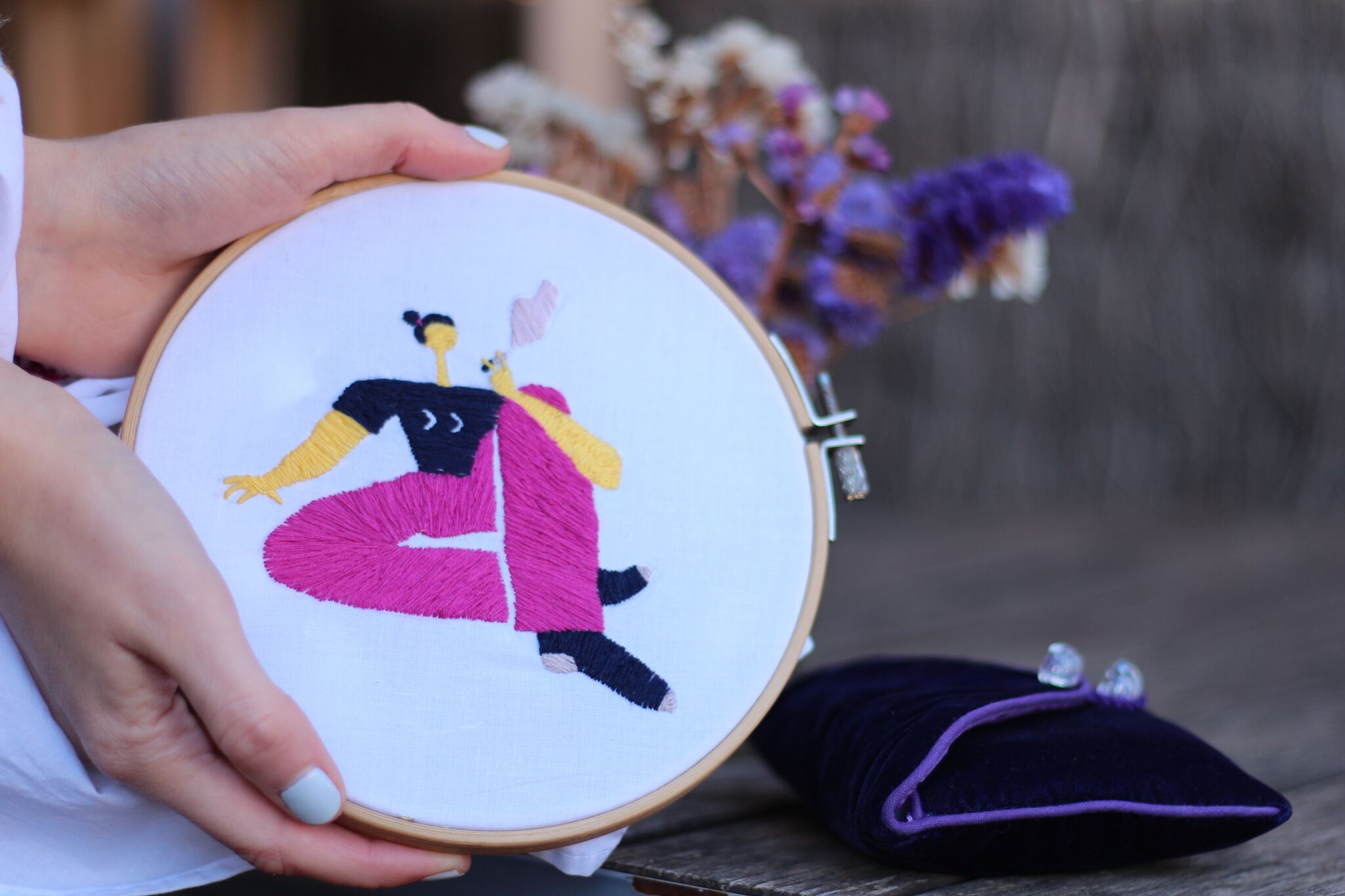 This made me confident to value my work more and see crafts differently. There’s a whole movement of young feminist embroiderers reclaiming this traditional ‘women’s work’ and making amazing and varied art, and I’m proud to be part of it. 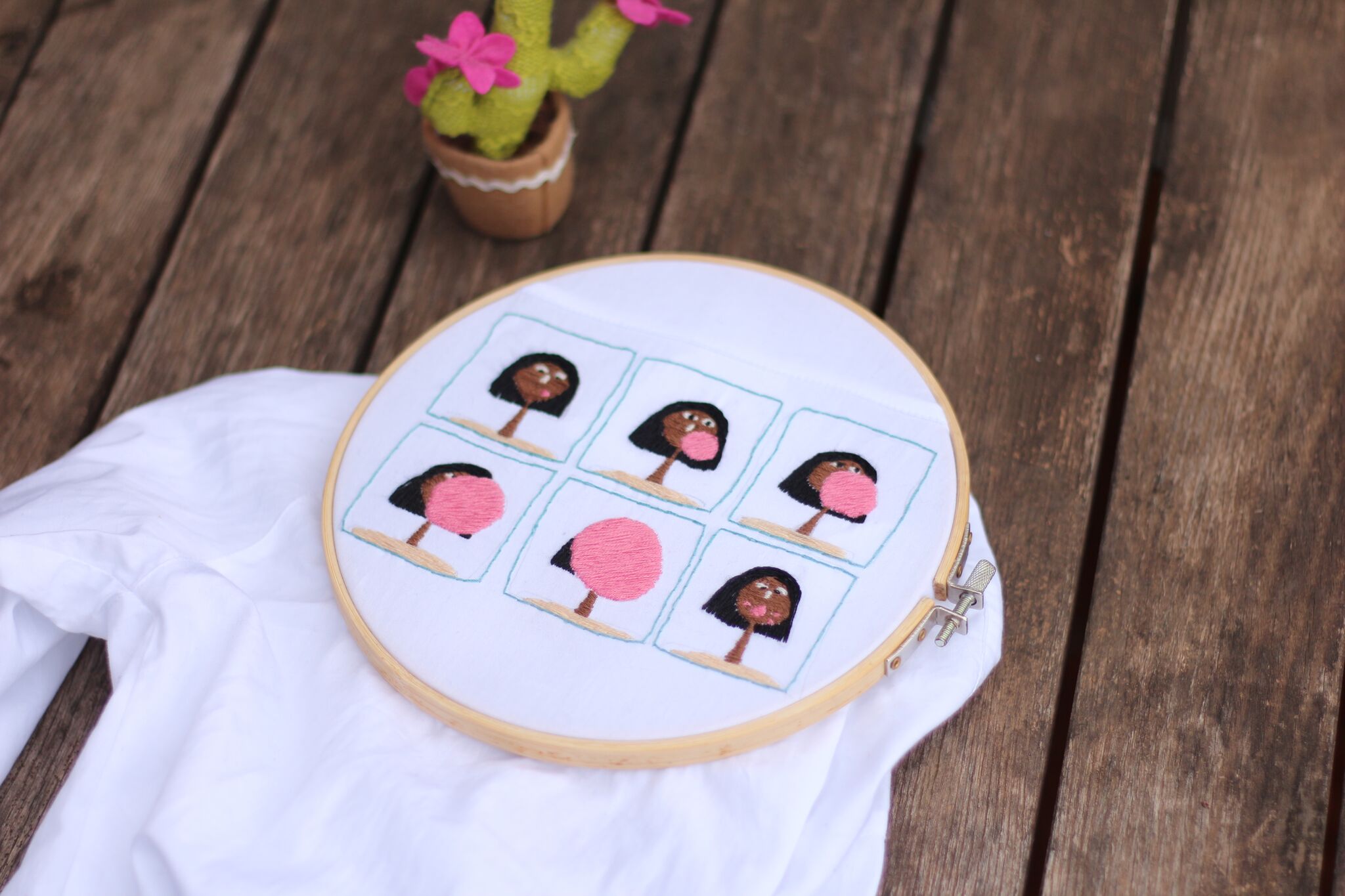 As a child my passion came more from my love of computers than art and I’ve always been interested in how technology was developing so quickly and all the amazing things that were becoming available with cheaper and more powerful PCs. 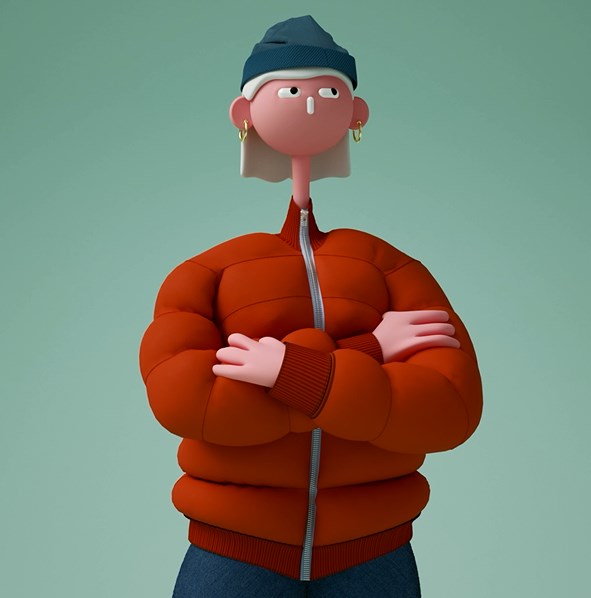 It was at university that I realised that the reason I loved certain styles was to do with the design, not just the technology. Since then my priority has swapped and I am obsessed with good design, even if I still have a secret irrational love of technology.

You guys are able to produce work across a range of mediums. What’s your creative process? What comes first?

First is always an idea sketched in 2D, to varying levels of completion. If the final work is going to be only in 3D sometimes we don’t need to make too much detail in the initial sketch and it can just be the skeleton shape with some colour and texture references. 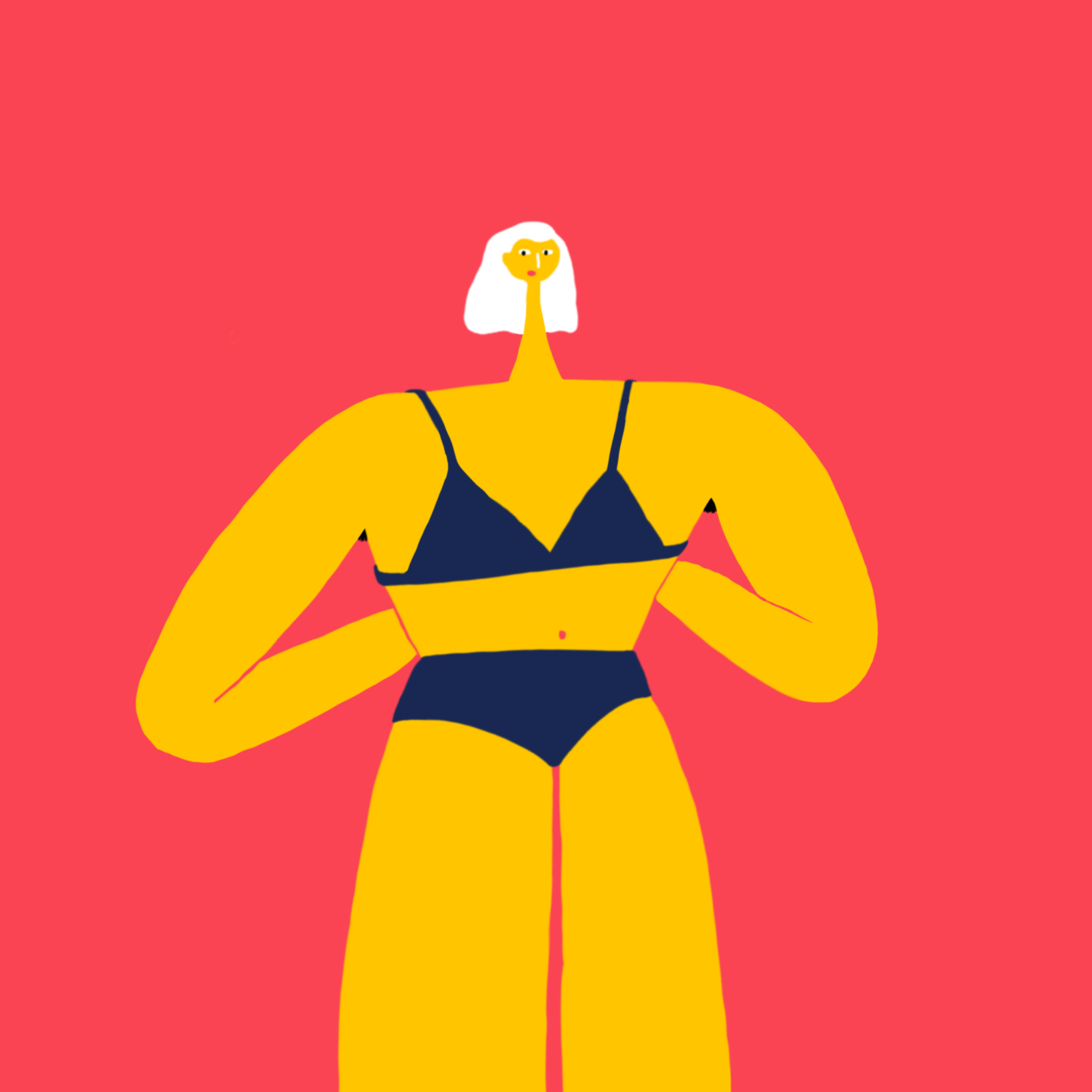 We find this way of working produces much better results because it’s easy to get lost in the technicalities of 3D and lose the composition and sense of the image. It also saves us time because we know that if the composition is working in 2D, it will work with volume. We can make changes much more easily and tweak things before moving to the next stage. 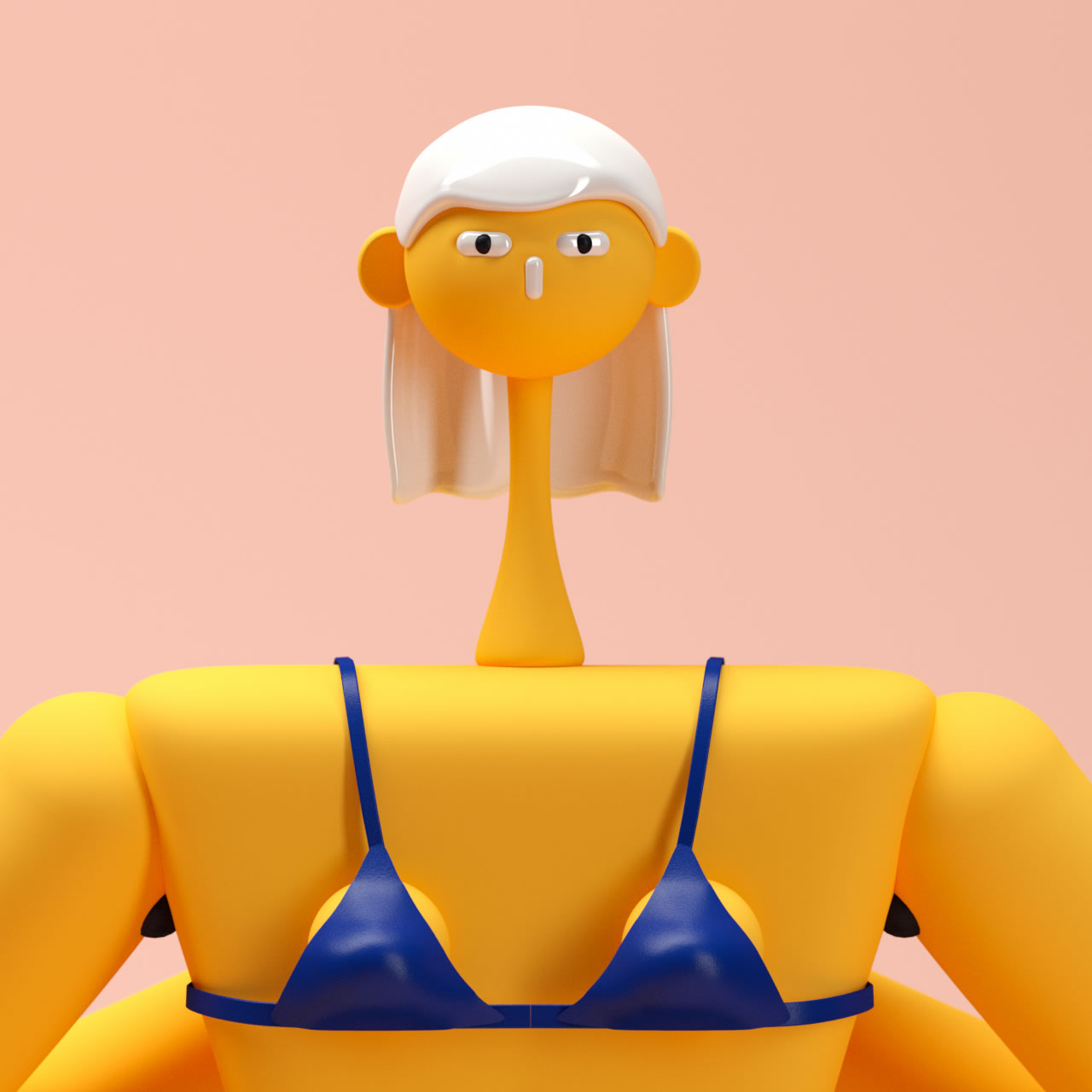 Similarly, why do you want to create work across a range of mediums?

One thing we love about Cabeza Patata’s characters is that they are not limited to the screen. We want to show that every medium of creating art can be commercially viable and equally respected. 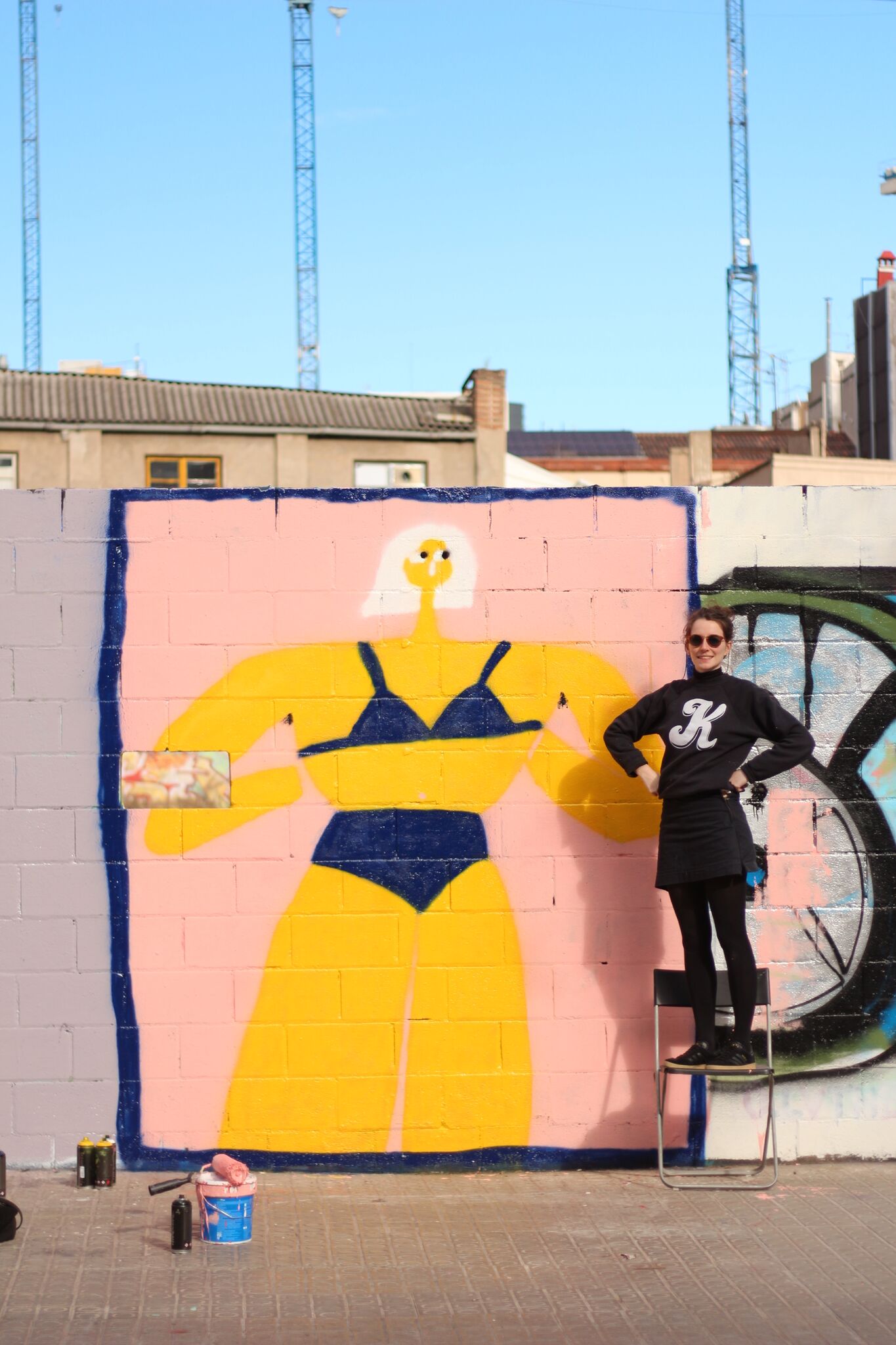 The way we consume media has changed so much with smartphones and social media. People are seeing more content all the time, whether it be video loops, still images or photographs. A painted mural might reach more people through a photo online than people seeing it in real life, increasing its value. 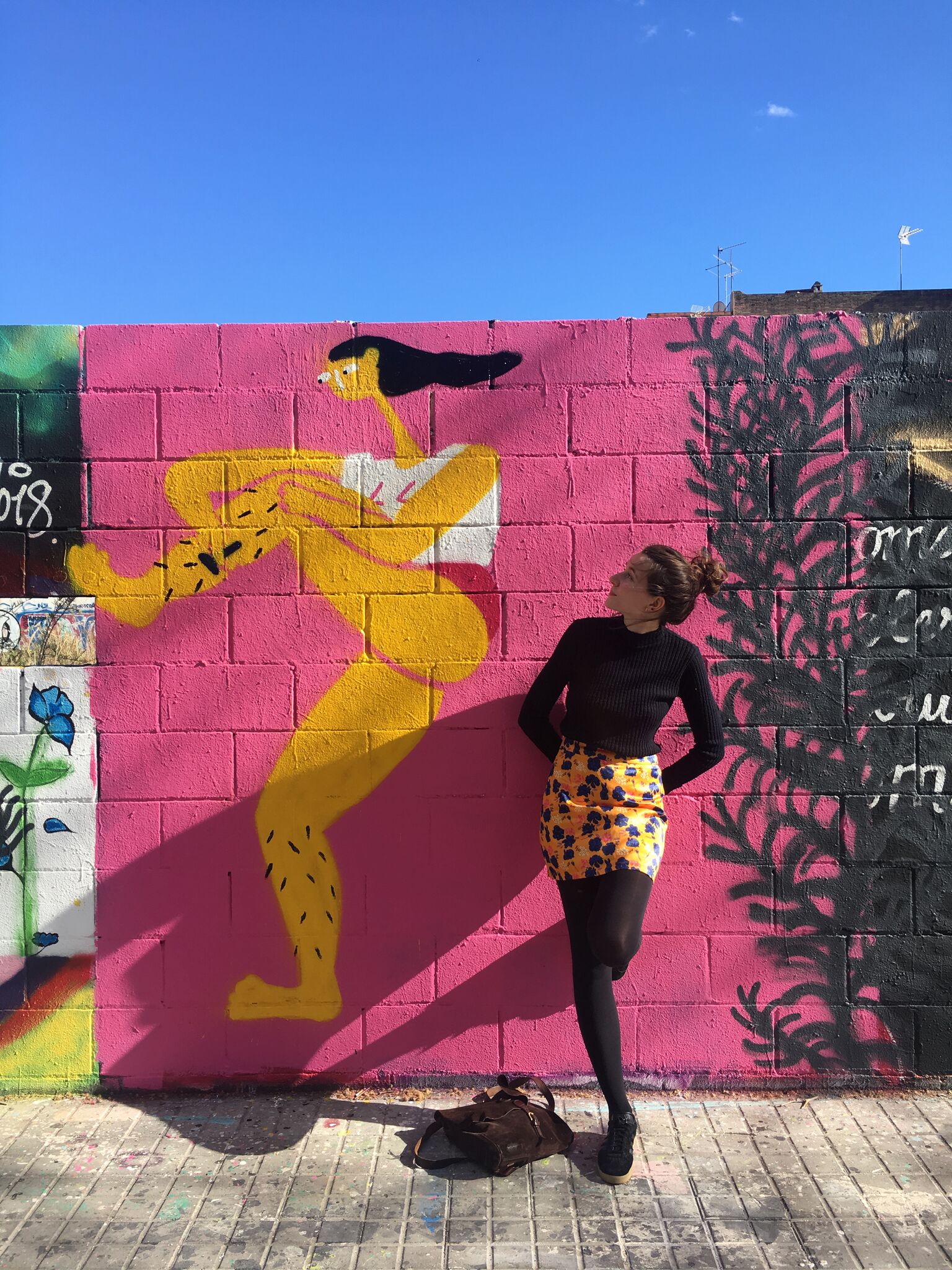 Why does your work predominantly feature women?
Sometimes people ask why we only draw women and it’s precisely for this reason that we do. Nobody would ever ask if it was the other way around.

It should be standard to see women and different ethnicities represented everywhere doing everyday things, and we’ll keep promoting this image until it is. We want to see women fighting, breastfeeding, and taking up space in every field without having to be sexualised or objectified. 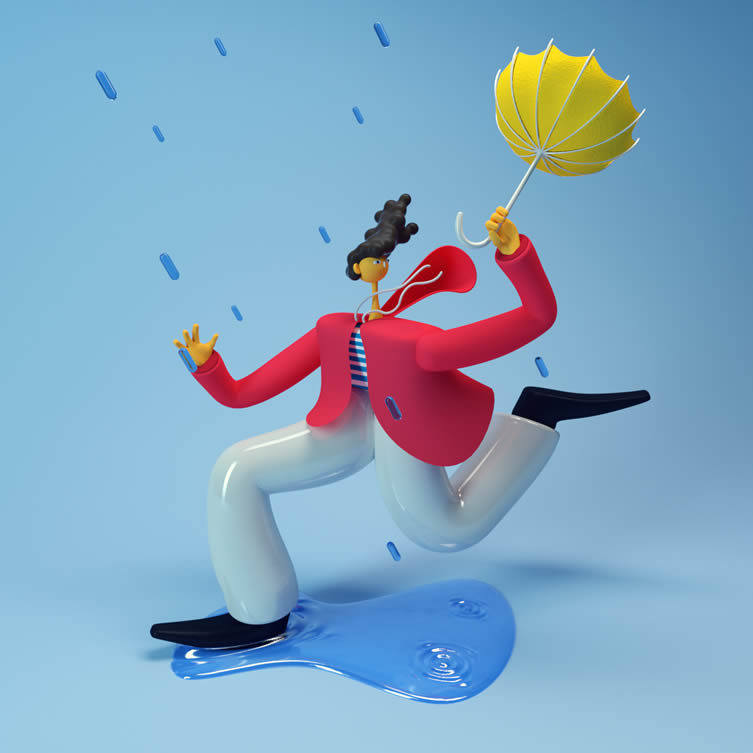 Why do they have such exaggerated features?

The exaggerated contrast between their small heads with long necks, going down to their big legs and arms, gives the impression that we are always looking up at them, giving them importance and powerful stance. In a world in which boobs are somehow so offensive to many people, our characters’ are obvious and always present.

You seem to have already been very busy with various projects - what have been your favourite so far?

We’re developing the style so quickly that as soon as we finish a project, it’s our new favourite. Even things we finished a few weeks ago feel old already as we’re moving on all the time.

So saying this, our favourite project to date is our Spring/Summer collection ‘photoshoot’. It was a great opportunity for Katie to join the 3D side, creating personalised and detailed digital clothing. This way of making clothes opened a new world of possibilities which we can incorporate into all our future projects. It means we can represent so many different people and jobs. 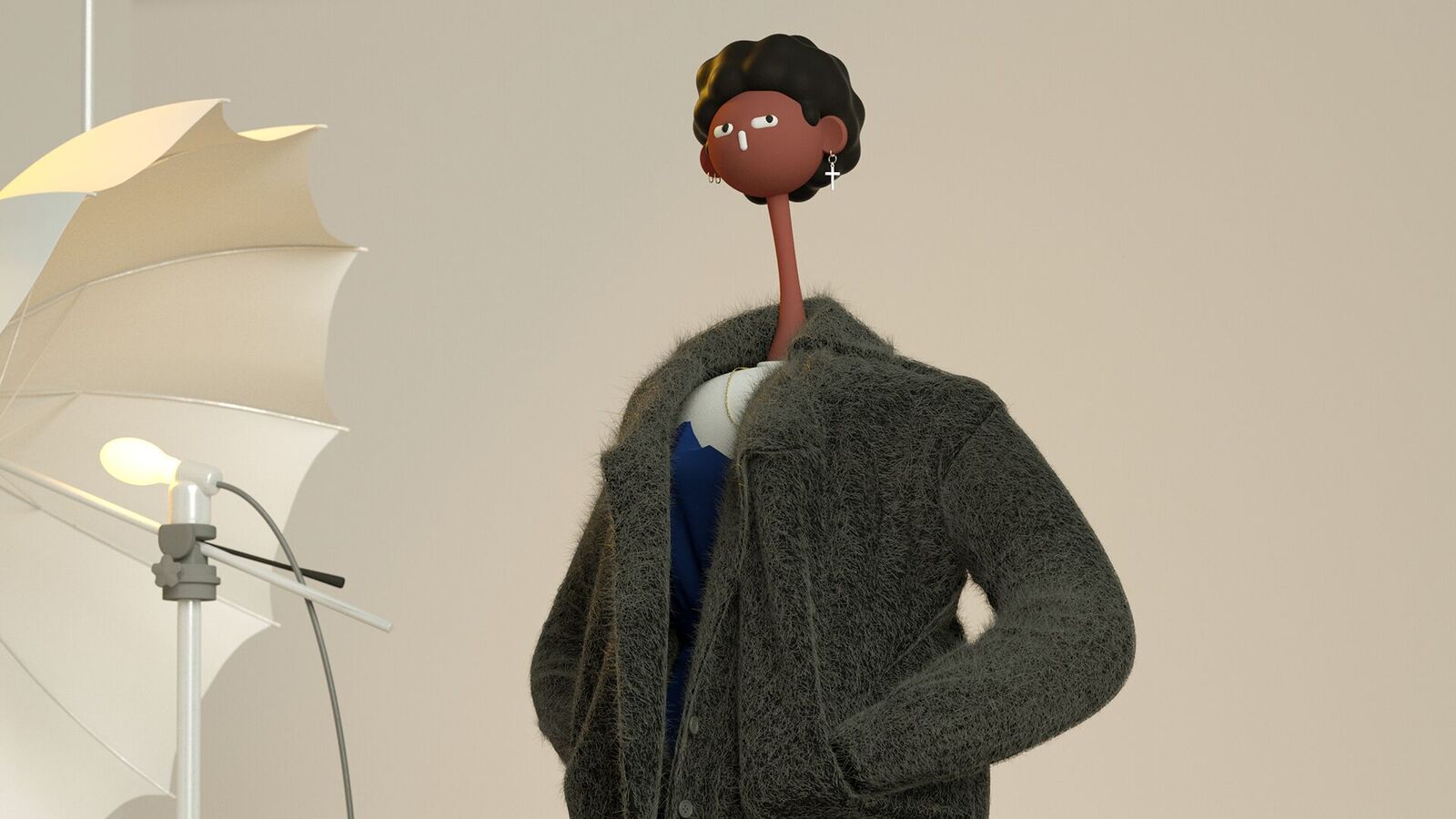 What are your biggest influences?

We LOVE the Get It Girl collective who represent diversity and equality in their beautiful illustration. We also are loving what Animade has been creating mixing 2D and 3D in their work. Also more broadly we are both fascinated by Grayson Perry’s work, taking undervalued traditional art and making it his own, with a social and cultural focus questioning traditional gender roles and power structures. 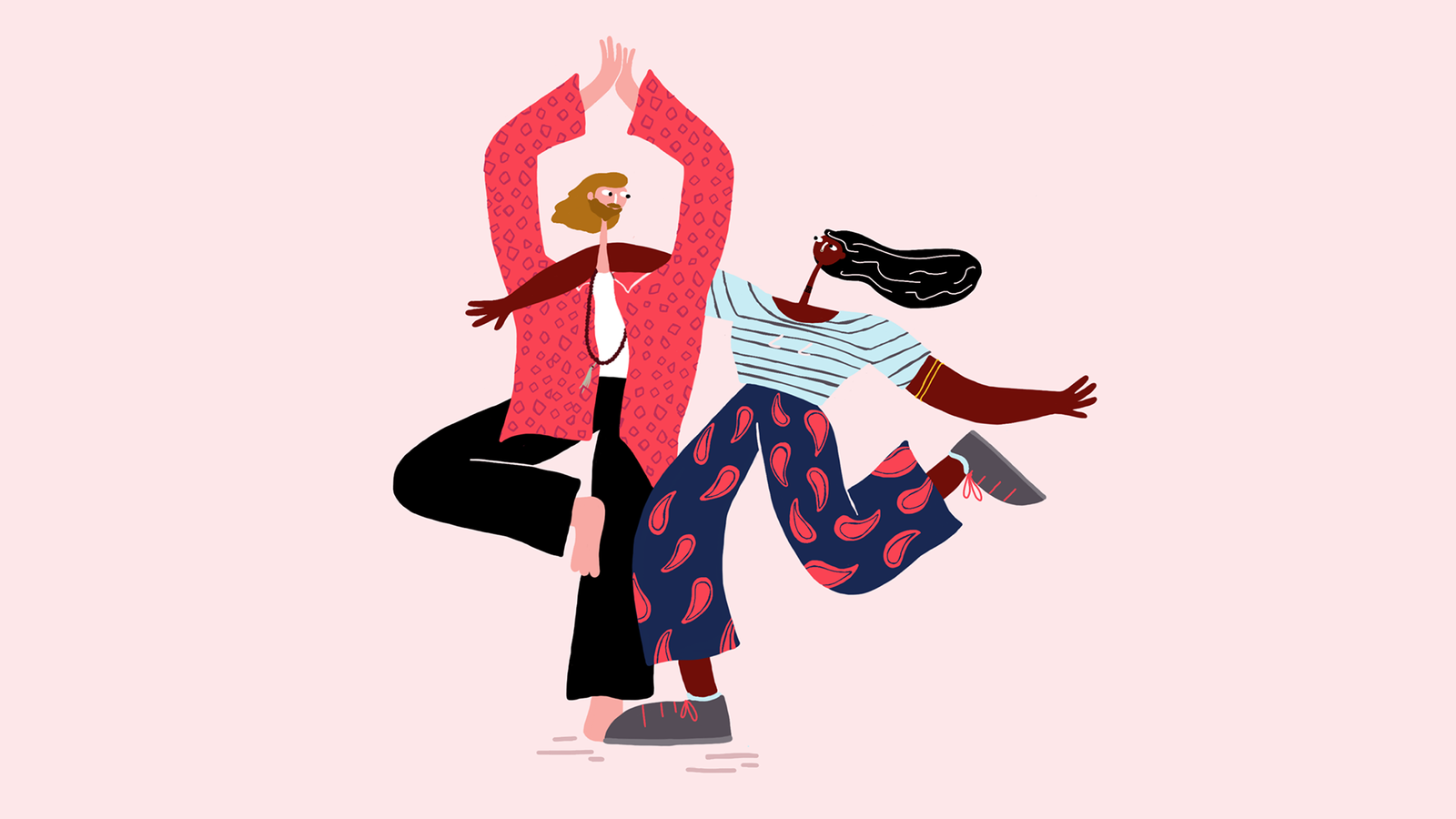 What have you been experimenting with recently?

Besides the digital clothing, we have started looking at environments for our characters. We are working on a sports series with the best athletes at Cabeza Patata. They will appear in different environments, such as stadiums and grass pitches.

If you weren’t doing this, what would you be doing?

We live in Barcelona so when we’re not working on Cabeza Patata stuff we mostly like going to beach and eating patatas bravas. Abel is still hoping to become a professional footballer but it’s getting a bit late so it’s a good thing we’ve started the studio. 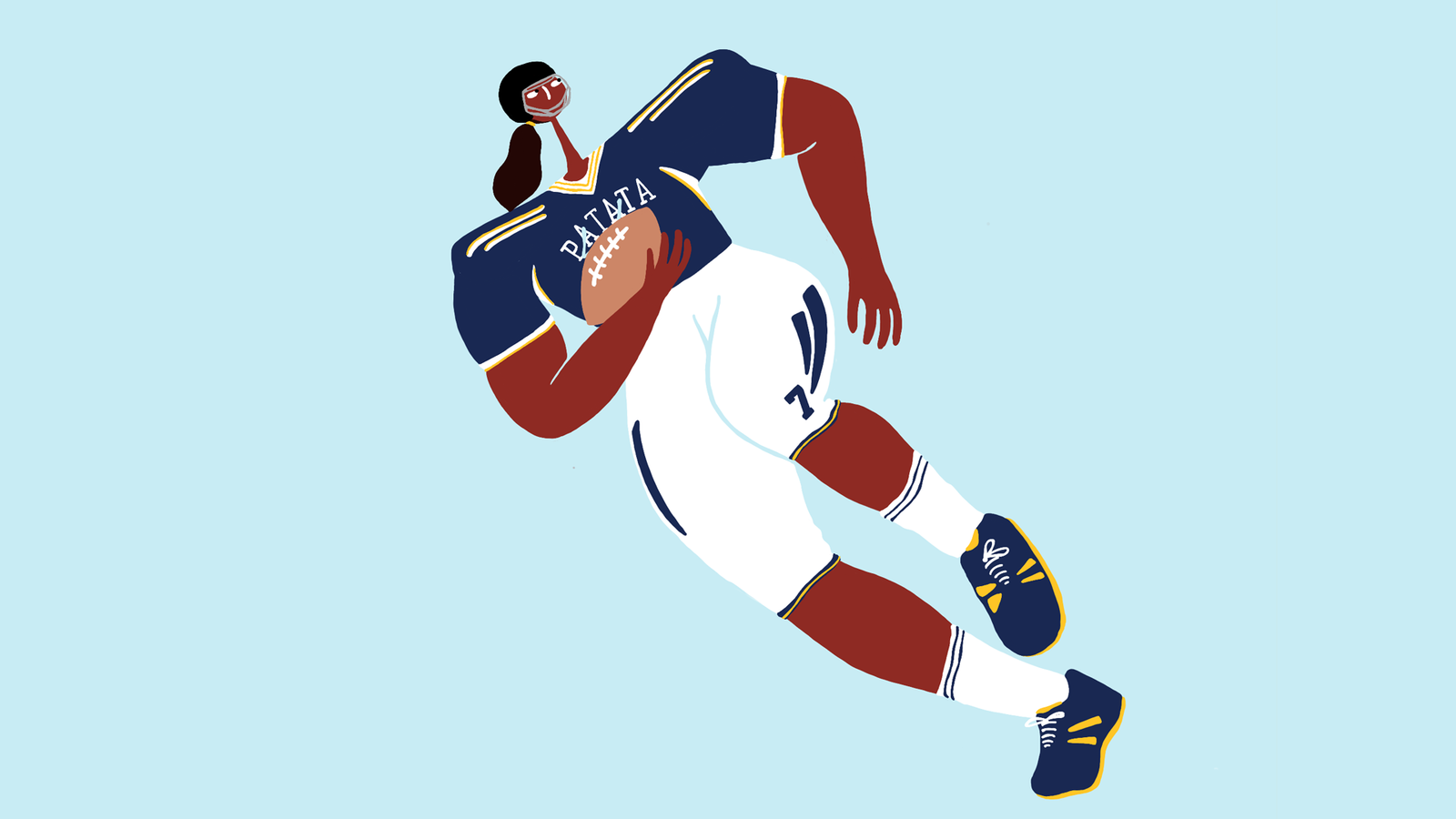 What advice would you give to aspiring animators/illustrators?

Try different styles and methods to begin with and don’t give up when they all look horrible! Everyone started somewhere even if now you only see their nice stuff on Instagram. Then, when you find something that works, go for it because it will keep getting better the more you produce. Sometimes it’s better to move on to something new than to keep trying to improve something old.

What do you hope to achieve this year?

A nice TV ad campaign would be our top wish. But we are excited to work on all sorts of projects, to show how applicable our characters are to so many different things. We’re imaging them anywhere from a government campaign to a luxury brand!

Thanks guys, exciting times ahead! 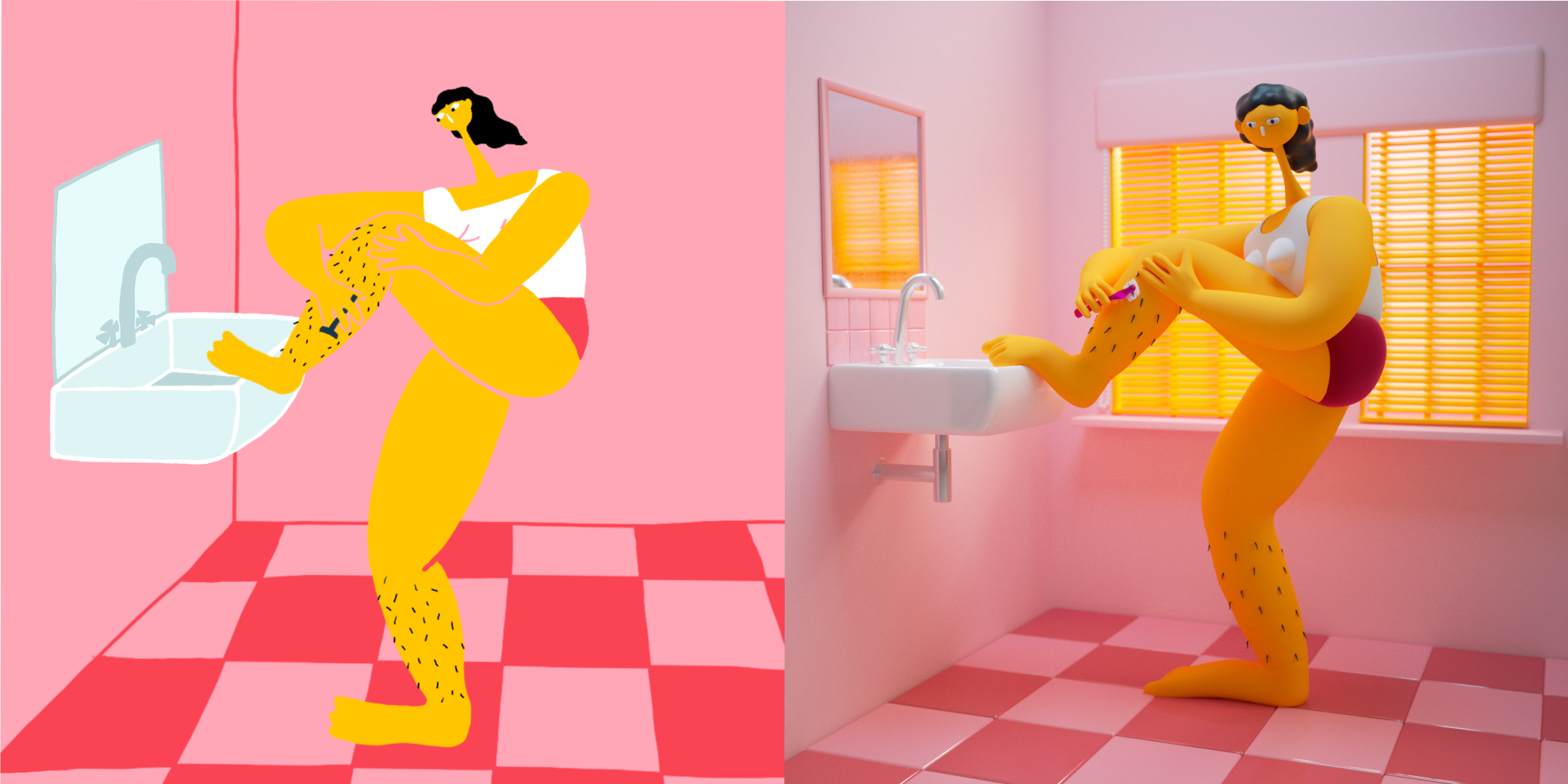