Could the Amazon Anytime messaging app be a serious rival to WhatsApp?

Evidently not content with effectively monopolising the worlds of online retail, voice activated assistants and drone delivery, Amazon have now set their sights on the world of instant messaging, with the tech giant recently posting a series of screenshots that appear to confirm that they’re working on a messaging app by the name of Anytime. Amazon has reportedly begun to survey its customers about potential features, and although it’s not 100% clear what form the final product will take, I'm placing a firm bet in the 'WhatsApp/Facebook Messenger' camp, at least when it comes to basic functionality.

A combination of speculation and screenshot leaks from Amazon-focused news outlet AFTV News (below) suggest that Anytime will be a full-featured, standalone messaging app for smartphones, tablets, PCs and smart watches designed to let people chat with text and video, send each other fun photos with filters, play games and engage with the full litany of Amazon services. The service seems to rival the big social networks and phone messaging service like WhatsApp, which sources say the app quite closely apes (indeed, even the leaked logo looks suspiciously similar), only with added functionality, like the ability to order food in a group chat, split bills, and make video calls with masks and filters. 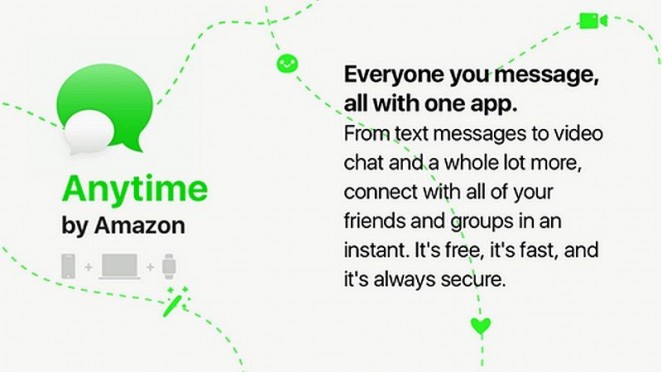 Amazon is thus far keeping its cards pretty close to its chest officially, and it isn't clear what stage of development Anytime might be at, but one customer of the survey has suggested that the service is already a finished product. According to consumer images provided by AFTVNews, the online service promises end-to-end encryption, the ability to work on desktop or mobile, and a way to add friends using just their name rather than phone numbers. 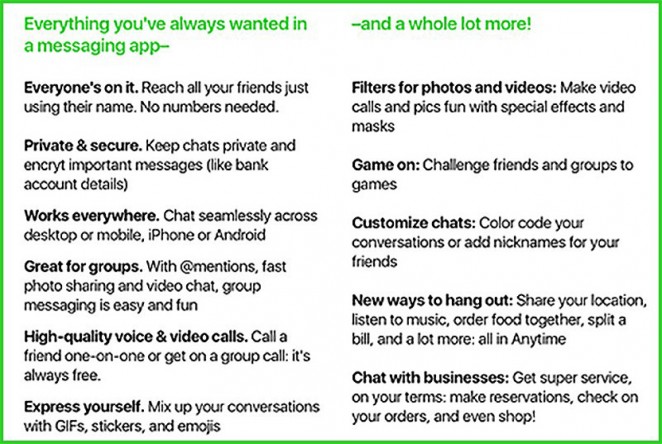 If Amazon does launch this messaging/ social networking app, it would be the first time the company delves properly into the social messaging space. The company owns video streaming site Twitch, but has veered clear of competing directly with the Twitters, Snapchats, and Instagrams of this world until now. Amazon has already made slight inroads into the messaging and communications market in recent months however. Earlier this year, it announced Chime, a video conferencing app for its business users, designed to compete with existing services such as Skype for Business. Amazon also recently added voice calling and messaging features to its Alexa-equipped devices. Anytime appears to be a much more ambitious beast though, and one designed to compete directly against the big messaging apps. Given their track record, I certainly wouldn't bet against them succeeding either!

Thus far I haven't been able to reach Amazon for an official comment, but rest assured when Anytime does (probably) drop at some point this Summer, I'll be putting it through its paces.

Kathy Menis, SVP of Marketing at digital marketing agency Signal, and an expert in technology marketing, believes that “because today’s brand experiences aren’t defined by device, channel or campaign, but by who the customer is (their preferences and past behaviour), today’s marketers need to adapt almost instantaneously to new technology launches, delivering a consistent customer experience across all platforms.” She also feels that Amazon's potential Anytime app could be a way of “unifying the channels through which their customers interact with both each other and the sellers that they’re purchasing from.” She feels that, by doing this, Amazon will be able to “improve its rich well of behavioural data on customers to build an even more intuitive and potentially, predictive, shopping experience for its customers.”