Activision, publishers of the perennially popular Call of Duty franchise, have teamed up with AKQA to create a choose-your-own-adventure campaign for Instagram, celebrating the release of “Advanced Warfare,” the latest instalment in the landmark series. Developers have “Hacked” Instagram to manipulate the way photos appear, creating an interactive story for fans and using the platform's tagging features to take users through a unique “Photo story.”

Developers have “Hacked” Instagram to manipulate the way photos appear, creating an interactive story for fans 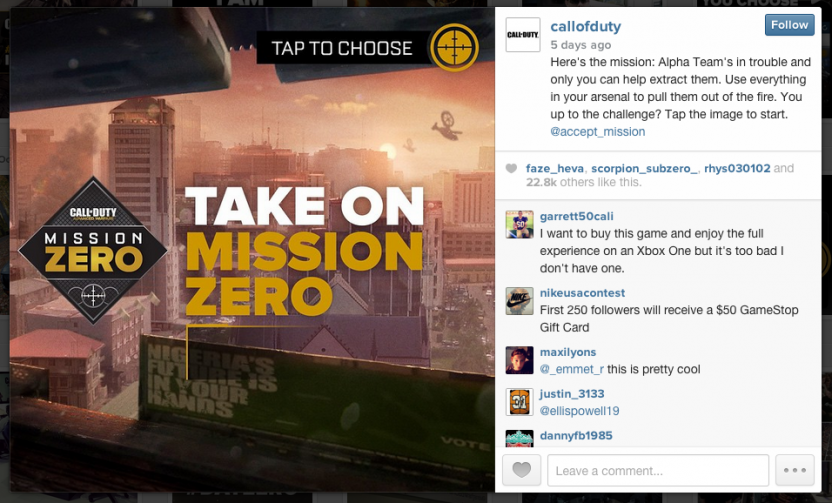 The campaign, entitled “Mission Zero,” tags options for action, allowing users to select new story panels through an interactive engagement, which plays out in a similar manner to a digital comic book. Users play out a story, which sits alongside the primary single player campaign of the game itself, and are asked to tap options, which keep the story going in a new image. The idea is to create an immersive, supplementary addition to the game, which works in an intuitive manner on all mobile devices. It's a complimentary story, which is more than just a simple product pitch, it's a reality-based experience conducted over social media.

Stephen Clements, executive creative director of AKQA, said it is “Essentially a prequel to the trailer and precedes the game,” and felt that Instagram felt like the right tool to use “Because it’s a great way to tell a story visually.” He added that “The fact that you can connect different Instagram pages together” allowed them to create an interactive experience, which was engaging for fans of the series, and newcomers alike to follow.

Mission Zero is “Essentially a prequel to the trailer and precedes the game,” and felt that Instagram felt like the right tool to use “Because it’s a great way to tell a story visually.”

The experience completely disregards desktop users in favour of mobile, because Clements believes “Call of Duty fans live on mobile and search for content there.” Fans can also earn points in the full retail game for connecting their Mission Zero accounts to their Advanced Warfare accounts, however, according to AKQA associate creative director E.B. Davis, Mission Zero will be largely a standalone experience. Davis said “The prize is the experience,” and adds that “People are enjoying it for the pure experience of what it is: hacking Instagram and making something cool.”

Call Of Duty: Advanced Warfare, which is the first game in the series to really take advantage of next generation consoles, is set 50 years in the future, and hopes to set back some of the genre fatigue that has been plaguing the series of late. It is the first game in the series to be developed by Sledgehammer Games, who take the mantle from established franchise behemoths Infinity Ward and Treyarch, but with the reputation of the franchise and the star power of Kevin Spacey (as the malevolent Jonathan Irons) on board, only a fool would bet against Advanced Warfare rocketing to the top of the charts.

Benjamin Hiorns is a freelance writer and musician from Kidderminster in the UK. He is terrible at Call Of Duty, but is a complete dynamo at Super Bomberman.