In light of Cadillac’s Dare Greatly campaign messaging, the brand’s latest NYC HQ, was unlikely ever to be accused of demurity. Taking their #dontyoudare challenge to heart, Cadillac House is an impressive 12,000 square-foot flagship space located in SoHo, which Melody Lee, Cadillac's brand marketing director, hopes will; “place the brand at the heart of art, fashion, design, film and community...finding points of intersection for Cadillac with our customers’ passions and interests, and being the brand that helps them pursue them”.

Cadillac’s branding has embarked on a number of notable plot twists in recent years, in a move towards energy, creativity, relevance, and affinity with millennials. In early 2015 it hosted the hottest ticket during New York Fashion Week, luring Anna Wintour and other fashion dahlings to its then brand-new New York home. As the year progressed, Cadillac was announced chief sponsor for New York Mens Fashion Week, and used a Public School fashion show to launch their XT5 Luxury SUV in Dubai.

Another chapter in their rebirth relied on The Oscars two years running, using the platform to showcase two highly anticipated new vehicles in 2016, as well as refining the 'Dare Greatly' brand positioning that it first introduced during 2015’s Academy Awards.

Cadillac House promises therefore, to be the home of daring. To be the all-new glittering golden child that allows all the brand’s repositioning to come together in one space. Open to the public last month, the gargantuas space serves as a rotating location for events, vehicle exhibitions and collaborative partnerships with organisations such as the Council of Fashion Designers of America and Visionaire. 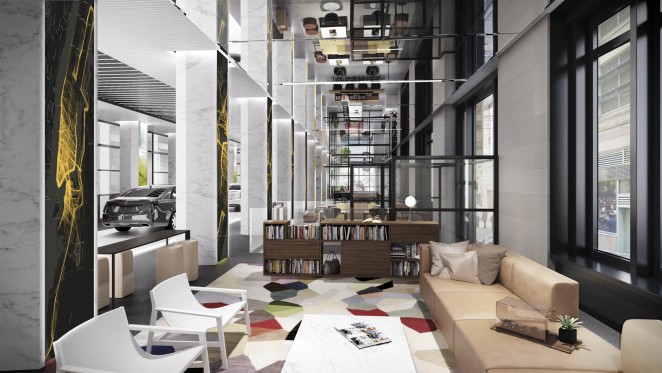 Visitors are lured with a heroic exterior and vintage Cadillac’s arranged to look as little like a car showroom as possible. Once through the door, the space develops into an ever-evolving look inside the brand, anchored in the exploration of a wide spectrum of talents, industries and enterprises. From concerts and interactive art installations to a fashion retail space.

There are touches of lunacy about the House, where Cadillac’s mission to envelop visitors inside the ‘feel’ of the brand goes a little bit too far. 12:29 are, for example, creating a signature Cadillac fragrance, and an on-site coffee shop provided by Joe’s Coffee has the potential to feel a little over stylised with counter seating inside what is, essentially, a car showroom. But actually ignore that, we’re talking about one of oldest luxury brands on the planet. It works. 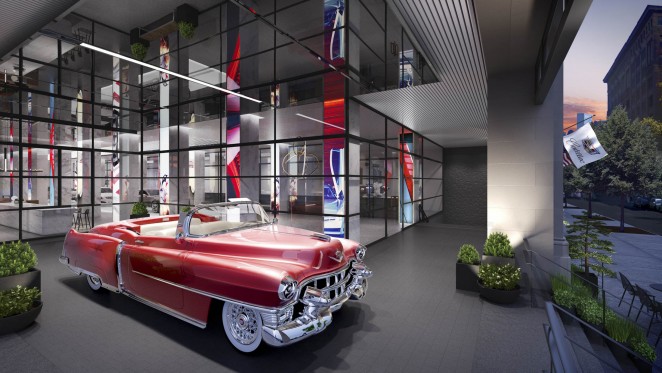 At the beginning of Cadillac’s rebrand Lee said; “our issue is not the quality of the product—our challenge is relevance” and she set about doing everything show could to bring a 114 year automotive history inline with millennials’ interests, and budgets.

Cadillac House may not be understated. But somehow, despite the size and the space it does have an air of subtlety about it, that other car manufacturers, (think Mercedes Benz, Ferrari) don’t manage to secure. And it’s this subtlety that might be the key to the brand’s future. Daring is a big task. But Cadillac House shows it may just pay off. 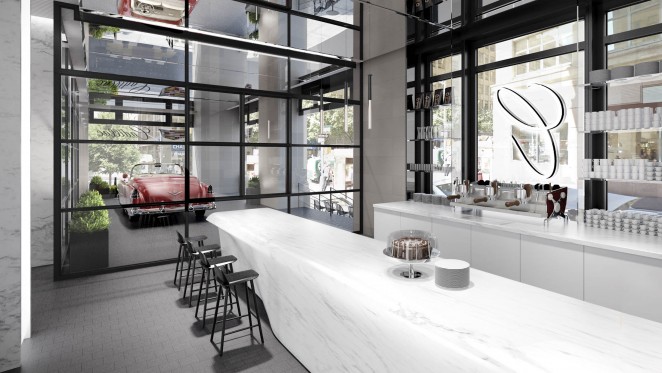