Be Original This Christmas: Mixing it up with MassiveMusic and Visualise

Our good friends at MassiveMusic have created a rather unique online activation that brings a liberal dose of festive cheer to pretty much any song imaginable (as long as it's available on YouTube). The musical agency's Amsterdam office has launched the nifty Xmassify online app just in time for the Christmas office party (unless you work at one of those offices that insist on having their parties at the start of December or the end of January to save funds).

The simple search engine allows users to browse the entirety of YouTube for their favourite tracks. They can then mix and match a range of Christmas sounds to lay over the track. These festive sounds include Santa Claus chortling away, Reindeers snorting, a descending glockenspiel pattern, jaunty sleigh bells and (rather oddly) a Christmassy parrot. Simply make your choices, hit Xmassify and enjoy! It's a simple idea, but it's executed perfectly. Hans Brouwer from MassiveMusic said: “It may be the most wonderful time of the year, but when it comes to music, it might become a little uninspiring. Every Christmas playlist is packed with the same old songs – so our gift to the world this year is the chance to mix it up a little.” 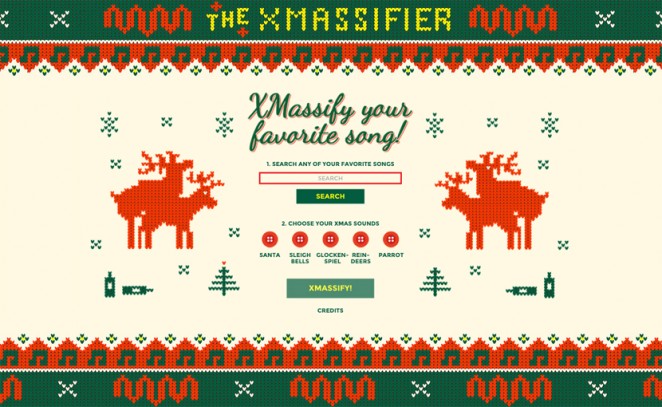 The logistical aspects of the campaign were carried out by MediaMonks, whilst the tongue-in-cheek art direction (which is based around what looks like reindeers getting down to business on a Christmas jumper) comes courtesy of Berlin-based design studio Kids. We can't think of a better way to waste 5 minutes, so if you're looking to kill some time and think you’ve got what it takes to create a makeshift Christmas number 1 out of your favourite (or perhaps least favourite depending on your levels of masochism) songs, head over to The Xmassifier to find out!

Another unique Christmas activation that's arrived just in time for the last week of Advent is the 360 degree christmas card created by the team at Visualise. Everyone loves a festive greeting (even if they declare otherwise), so to save on stamps this year and set themselves a fresh challenge, the international immersive experience production company decided to create a new tradition, resulting in the Visualise 360 Christmas Card! The team at Visualise said: “We wondered what an alternative Visualise Christmas party would be like and set about filming a series of interactions in slow motion because, sometimes everything is better in slow mo.”

So turn up the volume and join the team at the table by viewing in Chrome from your desktop to get the full experience or if you have an Android phone and Google Cardboard viewer, get closer to the action by downloading the YouTube app and hitting the little cardboard icon on the right hand side of the screen for the full 360 effect! Visualise is releasing the activation is support of the MSF charity (otherwise known as Doctors Without Borders), which brings medical aid to third world countries, so if the video has made you smile, please dig deep and donate what you can.