Union Station’s Beaux-Arts facade was transformed into a canvas for a 3D projection mapping video that was the centerpiece for the iconic Kansas City building’s centennial celebration, entitled "The Monument Comes Alive."  Bazillion Pictures created the 3D animation, visual effects and motion graphics for the project, and crafted the multitude of digital assets into a spectacle of imagery, color and light that tells the story of this architectural landmark and how it adapted and persevered through a tumultuous century. At this past week’s American Advertising Federations Awards  (AAF-Kansas City) the multi-media installation garnered two Gold awards on the heels of winning top honors at the Telly Awards.

Quixotic, the Kansas City-based production company specializing in high-end immersive events, produced the project, working closely with Union Station to create an outline and determine which events during the building’s rich history should be represented in the video. Once they decided on the most notable historic and cultural benchmarks, they began the process of culling through thousands of archival photos to find the images best suited for each segment of the show.

The project outline and photographs were then delivered to Bazillion Pictures, where they were divided up for asset creation and the CGI shots were assigned for animation and effects.

“At their best, century old photographs aren’t 4k quality, and won’t hold up when projected onto a massive building that spans a city block and is 10 stories high,” says Tyler Keith, Bazillion animator/VFX artist. “Rather than trying to improve the resolution by cleaning up the images, we went the other way, creating the distinctive patina of old film by adding more noise, grain and scratches to the photos. The vintage images complemented the modern-day pictures of Union Station and brought texture and depth to the multi-media presentation.”

Bazillion’s multi-disciplined team then created an animatic with rough stand-in imagery for the 3D animated segments. Once all of the scenes and timing revisions were made and content approved, the animatic became the blueprint for creating the final presentation. Bazillion’s colorist strived to create just the right amount of contrast, over-exaggerating and over-saturating the colors to make the animation pop against the background of the grey building.

The composers and sound designers at Quixotic and BicMedia were given a copy of the animatic and began scoring music and sound elements. The final track was delivered to Bazillion during week five of the very short six weeks that the company had to work on the project. Tyler Keith and David Humenczuk added the audio during the editorial process, adjusting the visuals and integrating additional content as needed to sync the track to the final presentation.

The multi-media installation was powered by twelve 20K lumen HD digital projectors that seamlessly mapped the video to the intricate architectural details of the building, transforming it into a giant 3D digital backdrop for the high-def digital installation.

“Bazillion’s mission was to create a dynamic animated collage of 3D imagery, visual FX-driven sequences, as well as over a hundred photographs, and bring everything together in a spectacular visual experience. The challenge was to, at the same time, create a 10-minute video that also conveys a cohesive story depicting Union Station’s 100-year history,” concur animators/VFX artists, Ben Dallman and Dave Humenczuk.

Quixotic provided Bazillion with mood boards and art direction for many of the different scenes, along with mapping specs, and onsite operations specifications. Using old blueprints and photo reference Jon Kendrick built an exact digital model of the Union Station façade. The replica was used during every phase of production, ensuring that the animation would exactly map onto every detail of the structure, enabling illusions – such as the movement of the building’s architectural elements and animated 3D objects – to seamlessly move and interact with one another. The digital model also was key to the creation of dramatic lighting effects that hit their mark, glowing and illuminating areas of the interior and exterior of the building and casting realistic shadows.

“Bringing Union Station to life and shape-shifting its architecture required that the projected animation, which depicted all of the elements of the structure was a perfect match with every component of the façade,” says Jeff Beith, Bazillion owner and creative director. “If it wasn’t exact the projectionists would not be able to line everything up on the building and the illusions wouldn't work, so the many layers of CGI elements had to be precise.”

Bazillion provided a one-stop approach to the video for the project, from animation, visual effects, motion graphics, 3D modeling and texturing to editing and color correction. Its team turned out a wealth of visual assets and shaped them into a captivating visual story. Historic photographs were juxtaposed with original 3D animation – such as a larger than life dinosaur breaking through a window that shatters into shards, and a train track that grows into a huge rollercoaster-like structure as a train moves along its rails like a giant serpent – to create a visually compelling multi-media show. 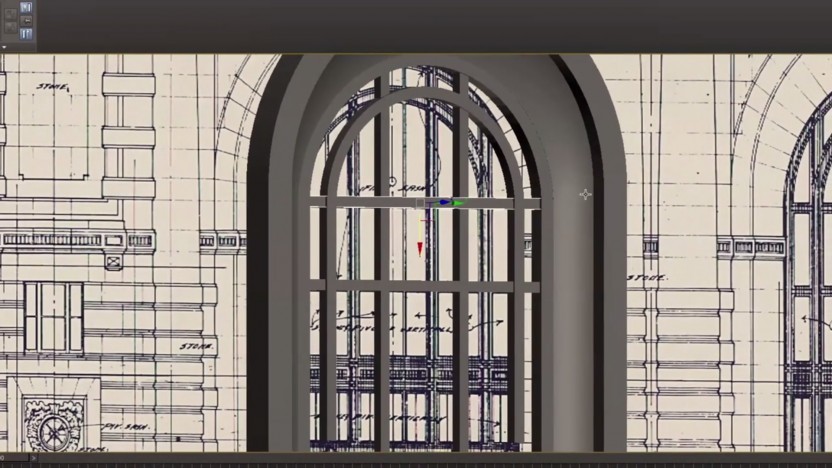 "Projection mapping is a complex process and this project was very much a collaborative effort," notes Bazillion executive producer, Diann Roche.  “Quixotic worked closely with us and provided creative feedback throughout the design and production. Bazillion’s team of designers, animators, motion graphic artists, illustrators, colorists and editors were thrilled to have the opportunity to bring their collaborative skills to such a large-scale canvas, and to create a tribute to a century of Kansas City history.”

“Over the years Bazillion has worked on other award-winning architectural projection mapping projects, and from experience we have an educated idea of what to expect when the show is presented,” says Beith. “But there’s nothing like seeing the final video projected on-site on such a giant scale –  and being in the crowd of over 15,000 as they watched the show, and seeing them jumped to their feet clapping and cheering at the end. Kansas City is still talking about the experience, and I’m very proud of Bazillion’s contribution to a project that pays homage to this iconic building.”

Bazillion also produced a ‘Behind-the-Scenes' video that follows an entertaining making of  “The Monument Comes Alive,’ which innovatively integrates 3D elements from the video  into its artists’ work environments.

About Bazillion:
Bazillion Pictures is an award-winning studio with a skilled team of talent that brings  creativity and technical expertise to creating innovative commercials, branded content,  and experiential media for digital platforms. For more information about Bazillion contact  executive producer, Diann Roche at 816-474-7427, and go to  www.bazillionpictures.com.