Every year, the London Design Festival descends upon the capital and brings the design community to life. For the last 9 years, the festival has also brought with it the London Design Medal, an accolade that has become remarkably important when recognising the past, present and future talent in the city and beyond. There were four winners announced yesterday during a ceremony at Canada House as part of the British Land Celebration of Design awards. These included legendary set designer Sir Ken Adam, the German-born British motion picture production designer most famous for his set designs for the James Bond films of the 1960s and 1970s, who took the Lifetime Achievement Medal. Concrete Canvas co-founders Peter Brewin and Will Crawford, and Dutch designer Marjan Van Aubel (the creator of glassware, a table and a stained glass window that all generate energy from sunlight), also took home the PCH Design Innovation and the Swarovski Emerging Talent awards respectively.

The most notable award, however, was the Panerai Medal, which went to design duo Edward Barber and Jay Osgerby of Barber & Osgerby, whose work is currently on display as part of a major exhibition at Somerset House as part of the festival. The Shoreditch-based duo are best known for designs including the London 2012 Olympic Torch, the Tip Ton chair for Vitra and a £2 coin commemorating 150 years of the London Underground. Another recent high-profile project involves designing trains for the London Crossrail railway (due for completion in 2017), which currently stands as Europe's largest infrastructure project. Osgerby said of the award: “It's a huge accolade and it's lovely to be acknowledged by our own city. It's been 20 years of work that's brought us to this point so it's not like an overnight thing.”

The duo were chosen for the medal because of the diversity of their work, which springs from their background in architecture but expands to a variety of furniture, product and interiors works. They currently oversee three studios, all of which operate under one roof with different areas of focus. Barber & Osgerby is primarily for industrial design, Universal Design Studio is responsible for architecture and interiors, and Map works primarily on tech-focused projects. Barber says of the setup: “There are small cross-overs on various projects but they are different teams of people, so we thought it would be better that they were recognised that way.” Osgerby adds: “It's also more honest. There are other companies who do lots of different things and they're all under one name but if I was I was going to engage with that company I would be a bit confused about it.”

The products that Barber & Osgerby is launching at this year's festival include a collection of bamboo pendant lamps and a shower control unit for Axor, as well as a book filled with images that show their various projects from the past few years at different stages of development. At Somerset House, the pair have furnished a space called the Reading Room; part of the 10 Designers in the West Wing group of installations. Visitors will be able to browse copies of the book within the quiet library-like environment. During last year's design festival, Barber & Osgerby installed two giant rotating mirrors inside the V&A's Raphael gallery and showcased a collection of furniture for Vitra.

The duo were chosen for the medal because of the diversity of their work, which springs from their background in architecture but expands to a variety of projects

Among the judges for this year's medals were V&A Museum director Martin Roth, Royal College of Art rector Paul Thompson and head of culture for the Mayor of London, Justine Simons. The London Design Medal has been awarded annually since 2007 to an individual or group that has demonstrated “An outstanding contribution to London and design.” Festival director Ben Evans explains: “One of the reasons why we do these awards and the reason the whole festival exists is to continue to position London as a leading design place, and the only reason that we are able to sustain that, and to continue to do that on an incredible basis, is through people coming here and choosing to be here.” This year's London Design Festival is underway right now, and will run until 27 September. 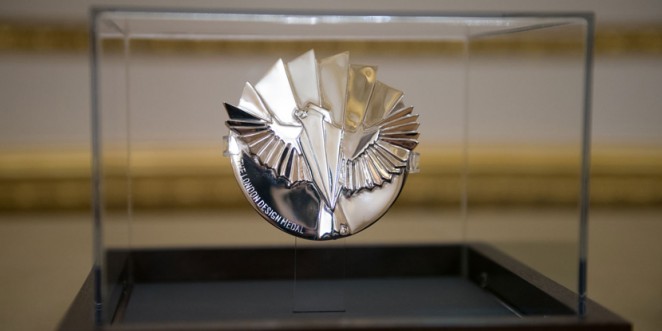