UPDATE: Since the original article was posted (below) on Tuesday morning (June 6), Banksy has withdrawn his offer to send a limited edition print of a new piece to voters shunning Conservative general election candidates in and around his home city of Bristol. The withdrawal comes as a result of the Electoral Commission and would-be Tory MPs who are genuinely concerned it could alter the results in six constituencies, given the notoriety and popularity of the street artist. The offer was apparently deeply concerning to Tory candidates, as in places such as Thornbury and Yate the party is fighting off a strong Lib Dem challenge. Avon & Somerset police reportedly recieved a number of complaints regarding the stunt and a statement they released on Twitter seemed to suggest they were investigating the matter further. Apparently, this was too much heat for Banksy to handle, especially given he was also warned that his stunt might actually go so far as to invalidate the election result in the affected areas. The law can be a harsh mistress sometimes!

A message was posted yesterday afternoon to the official Banksy website. Headlined “product recall”, the message said: “I have been warned by the Electoral Commission that the free print offer will invalidate the election result. So I regret to announce this ill-conceived and legally dubious promotion has now been cancelled.” A spokesperson for the Electoral Commission, added: "The law in this area is complex. Given the risk that someone taking a photo inside a polling station may be in breach of the law, whether intentionally or not, the commission’s advice is against taking any photos inside polling stations. A person is guilty of bribery if they directly or indirectly give any money or procure any office to or for any voter, in order to induce that voter to vote or not. It is for the relevant police force to investigate any allegations that bribery may have taken place.”

So there you have it folks. Banksy fought the law and, this time at least, the law won. For a reminder of hapier times (yesterday morning), please see the original article below:- 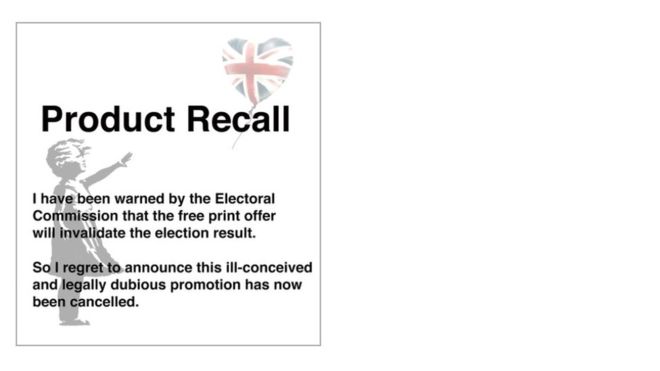 When it comes to politics, whilst I am unashamedly left-leaning, I've never been one to proselytise. Many of my friends and family members are planning on voting Conservative on Thursday and I've made my peace with it, even if, in my opinion, many of them are voting against their best interests. My social media feeds, however, have practically bled opposing shades of red and blue over the past month as conflicting ideologies clash and blend into one indefinable, smug mess of 'he said, she said' boilerplate echo chamber bullshit. It's all been so vitriolic and cynical, and if I see one more political meme featuring the visage of either Mrs May or Mr Corbyn I might very well sign off Facebook altogether. Well. Until Friday at least.

Is there a way to make a politically biased statement and spread your own gospel without coming across as a patronising worm? It transpires there actually is. Be creative about it! Enter notorious street artist/hotelier/international prankster Banksy, who has stood above the bile and blather by creating a limited-edition print that he says he will be sending to all of those voting against the Conservative party in the upcoming UK election. It's using art to make a statement, not misleading, poorly fact-checked memes!

The print in question is based on his famous Girl with a Balloon artwork, but what was previously a red heart-shaped balloon has been replaced with a Union Jack flag pattern. Banksy announced on his website last week that he will be offering the print to registered voters in the Bristol North West, Bristol West, North Somerset, Thornbury, Kingswood and Filton constituencies who vote against the Conservative party on 8 June. Five of the six electorates have Tory sitting members. He has instructed voters to send in a photo of their marked ballot paper as proof that they voted against the Tory party and, in turn, the complimentary print will be mailed out to them free of charge. 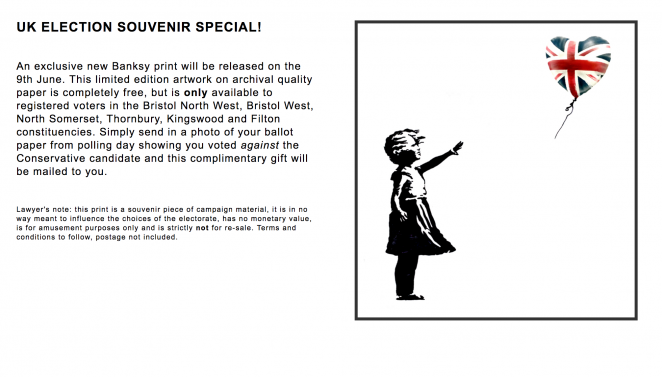 Of course, whilst it's a wonderful idea in principle, critics on the artist's Instagram account have actually pointed out that this could be considered illegal and would end up being counterproductive if votes cast are disqualified. This is particularly true given that The Electoral Commission actively discourages the taking of photos inside polling stations, though it is not specifically prohibited by law. It is also technically illegal to reveal how someone else has voted. An Electoral Commission spokesperson warned voters against taking part in the giveaway, telling the BBC: “Given the risk that someone taking a photo inside a polling station may be in breach of the law, whether intentionally or not, the commission's advice is against taking any photos inside polling stations.”

Does the lawyer's note at the end of Banksy's announcement stating that the print is intended as campaign material that offers no monetary incentive to vote a certain way, enough to silence the naysayers? It reads: “This print is a souvenir piece of campaign material, it is in no way meant to influence the choices of the electorate, has no monetary value, is for amusement purposes only and is strictly not for re-sale. Terms and conditions to follow, postage not included.” Calling it a souvenir piece is perhaps a little patronising though, given that it clearly states its ambitions right out of the gates. As such I'm honestly on the fence about whether or not this is a good idea. Still, at least it's not another meme.

Banksy is widely known for his politically charged works of course. He recently opened an “all-inclusive vandals resort” in Bethlehem, five metres from the wall that separates Israel from the Palestinian West Bank and he also recently unveiled a mural in the English town of Dover, showing a worker chipping a star away from the European Union flag. Previous works by the artist have included the temporary Dismaland theme park in Weston-Super-Mare, the remains of which the artist eventually transferred to Calais to create shelters in the migrant camps.