News has been trickling in through the grapevine over the last 24 hours, suggesting that online retail giants Amazon have purchased the streaming site Twitch for over $970 million (, edging out Google, who have reportedly been in talks to acquire the company. It's thought that Amazon purchased the site in order to appeal to a younger audience, actively competing with the likes of Netflix and YouTube. This is quite comfortably one of Amazon's largest acquisitions to date following their acquisition of LoveFilm, which (since being renamed as “Amazon Instant Video” has thus far failed to really mount much of a challenge to Netflix.

It's thought that Amazon purchased the site in order to appeal to a younger audience, actively competing with the likes of Netflix and YouTube

Twitch is an online streaming platform that focuses on gamers recording themselves playing and commenting on various video games. Currently the service has around a million users recording themselves playing, with more than 50 million unique viewers tuning in to watch the action unfold, comment on the videos and just generally get involved in the Twitch community. The site initially began life as a gaming-centric off-shoot of Justin.tv, a general-purpose video site with little to differentiate itself from YouTube. Twitch has managed to vastly surpass its original home, however, and as a result, Justin.tv was shut down earlier this month. This isn't Amazon's first foray into the world of gaming, of course, as they recently purchased 'Double Helix' studios and have even designed their own game controller for their 'Fire TV' set-top box. 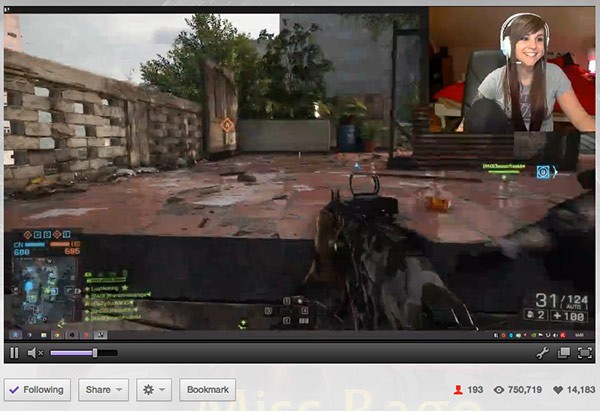 Amazon head Jeff Bezos was understandably enthusiastic about the purchase, practically gushing in a statement that “Broadcasting and watching gameplay is a global phenomenon and Twitch has built a platform that brings together tens of millions of people who watch billions of minutes of games each month.” He says that like Twitch, Amazon is a company that obsesses over their customers, and “Like to think differently.” he says they “Look forward to learning from them and helping them move even faster to build new services for the gaming community." Twitch might only be three years old, but it has already managed to usurp both Ustream and even YouTube as the go-to service for streaming gaming content, especially on the latest generation of consoles (the PS4 and Xbox One), both of which have Twitch functionality built in as standard.

Like Twitch, Amazon is a company that obsesses over their customers, and “Like to think differently.” Amazon head Jeff Bezos

CEO Emmett Shear, meanwhile, said they settled on Amazon because he feels they believe in the Twitch community and that they share core values and a long-term vision. Interestingly, he also said they'll be keeping almost “Everything the same: the office, the employees, the brand, and most importantly the independence,” only now with Amazon's seemingly limitless resources. This goes some way towards answering the question of whether or not Amazon will allow Twitch to continue operating as a standalone business (in much the same way Facebook did with Instagram), or if they will find a way to eventually integrate the service into its existing video business. The acquisition is thought to be finalised in the second half of this year.

Benjamin Hiorns is a freelance writer and musician from Kidderminster in the UK. He once tried streaming a game on Twitch but didn't appreciate being called a “Giga n00b” so gave up post-haste.

Through the passage of time festivals are undergoing modifications. Raksha Bandhan is also known as Rakhi. Rakhi has become a holy festival for sisters and brothers. Sisters tie them to brothers. Priests tie them to people of his congregation.

Through the passage of time festivals are undergoing modifications. Raksha Bandhan is also known as Rakhi. Rakhi has become a holy festival for sisters and brothers. Sisters tie them to brothers. Priests tie them to people of his congregation.

Incredible India, the country of festival with rich culture and traditions-observe it. India is a country of different caste, creed, regions, languages, living styles and traditions, but here anyone can find the unity in variety. Every state has its own way of celebrating festival with great pomp. Rakshabandhan or Rakhi is one of them.