Leo Burnett London sends a child to space for the NSPCC

Leo Burnett London has launched a new brand campaign for the NSPCC, the first within their rebrand with the new strap line; “Every Childhood is Worth Fighting For.” The campaign is inspired by childhood dreams and imagination and shows how the work the NSPCC do helps children rebuild their lives, giving them back a childhood full of hope and endless possibility. It's centred on a film that follows the story of a boy called Alfie who dreams of being an astronaut. The film takes place in his imagination, in which we see Alfie on a mission to the moon as he recounts in a voiceover how he and his mother experienced domestic violence and physical abuse, and the help they received of the NSPCC. At the end of the film we see Alfie back in the real world, safe and looking forward to the future with the tagline; “Your donation can take a child anywhere.”

Leo Burnett London has launched a new brand campaign for the NSPCC, the first within their rebrand with the new strap line; “Every Childhood is Worth Fighting For”

The campaign is supported by social media activity with the hashtag #EveryChildhood. The TV ad, which launched last night on Channel 4 with an introduction by Educating Yorkshire star Musharaf Asghar (aka Mushy) in a bespoke 10-second spot. It's called simply “Alfie the Astronaut,” and was created by Matt Lee and Pete Heyes at Leo Burnett, directed by Chris Hewitt through Knucklehead and edited by Adam Marshall at Whitehouse Post. Media planning and buying was handled by OMD UK. Supporting the TV advert will be a digital campaign targeting Mums across key sites, including the Mail Online, as well as social media activity across Facebook, Twitter and paid search. The campaign will be accompanied with a fundraising campaign focused on maximising the interest generated by Alfie’s message. A digital campaign will look to retarget those who have watched the Alfie film and shown an interest in the NSPCC with several different messages to encourage them to donate.

#LikeAGirl continues to sweep up awards at the Emmys!

The #LikeAGirl spot for Procter & Gamble's Always brand continued its winning streak this week, receiving the Emmy for Outstanding Commercial at the National Academy of Television Arts and Sciences' annual Creative Arts Emmy Awards at the Microsoft Theatre in Los Angeles on Saturday night (September 12). The ground breaking film, created by Leo Burnett's Toronto, London and Chicago offices, and directed by documentary filmmaker Lauren Greenfield, received numerous accolades throughout the past year, with strong showings at the Cannes Lions Festival of Creativity, the Clio Awards the Facebook Awards and the Webby Awards, among many others.

The #LikeAGirl spot for Procter & Gamble's Always brand continued its winning streak this week, receiving the Emmy for Outstanding Commercial

Mark Tutssel, chief creative officer of Leo Burnett Worldwide, said: “Following a fantastic year at advertising industry award shows, it is a great accomplishment to gain recognition by the Academy of Television Arts & Science. This particular win is proof of how an idea can truly have a positive impact on society.” The spot beat out five other Outstanding Commercial nominees, including Snickers "Brady Bunch" from BBDO; Adobe "Dream On" from Goodby, Silverstein & Partners; Budweiser "Lost Dog" from Anomaly; and Gatorade "Made in NY" and Nissan "With Dad" from TBWA/Chiat/Day. This is the second Outstanding Commercial Emmy win for Leo Burnett in the last 10 years. The Creative Arts Emmys show will be broadcast in the US on the FXX channel this Saturday (September 19) at 8PM (Eastern Time).

To launch a new campaign for its game-changing SUHD TV range, Samsung Electronics Australia has released a striking TV spot from Leo Burnett Sydney, which uses an array of diverse characters to demonstrate the immersive power of SUHD (Super HD) TV. “Another World Awaits You” will feature across national TV, subscription TV, cinema and digital locations until the end of November 2015. The creative, which includes 30 and 60 second cuts, casts the viewer in various leading roles (representing different forms of entertainment) with appearances from Vikings, soldiers, astronauts and other characters, to bring his viewing experience to life.

Samsung has released a striking TV spot from Leo Burnett Sydney, which uses an array of diverse characters to demonstrate the immersive power of Super HD TV

Grant McAloon, executive creative director at Leo Burnett Sydney, said: “The default option for this sort of brief would be to go for over the top visuals backed up by crazy amounts of CGI. We wanted to counter that and simply play with the idea that great image quality helps entertainment do what it does best: make you feel like you’re part of the action.” McAloon's Fellow ECD Vince Lagana added: “Thankfully, Samsung gave us the freedom to push the creative. So when Steve Rogers jumped on board, we felt sure the end result would be wildly different for the category. Given we ended up with an ogre doing burnouts in a muscle car, I think we got there.”

Masafi CEO Reginald Randall said: “From the very beginning, Leo Burnett demonstrated creative thinking skills, strategic prowess, and a deep understanding of consumer touch points - key ingredients for any successful communications campaign. We are proud to be joining forces with an agency that has, over the years, continued to stretch the boundaries of what is possible in the world of advertising.” Kamal Dimachkie, executive regional managing director at Leo Burnett Dubai, added: “We look forward to driving Masafi's value growth and expanding the brand's reach - using a steady flow of engaging and meaningful content. Ultimately, our goal is to ensure that the business continues to differentiate itself in the eyes of consumers.” 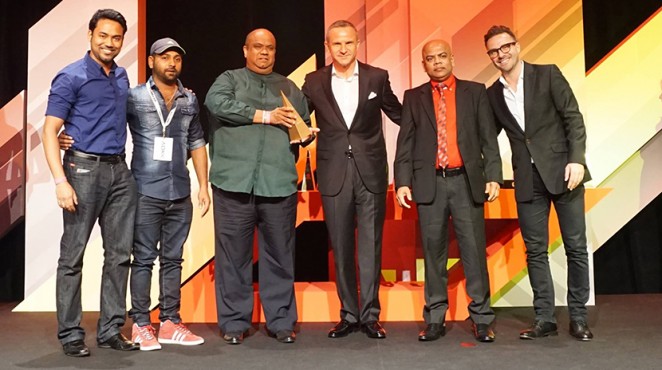 Young Spikes contenders from Leo Burnett Malaysia and Singapore also won the Gold and Bronze awards for the Integrated category at the Young Spikes competition. The Young Spikes Integrated Competition is a two-day challenge that takes place during the Spikes Asia Festival and participants must be under the age of 30 to take part. Leo Burnett Melbourne took home the prestigious Grand Prix in the Integrated category for SPC Ardmona’s “#MyFamilyCan,” and Leo Burnett Sri Lanka won a prized Creative Effectiveness Spike for Mawbima’s “The world's first mosquito repellent newspaper.”