adam&eveDDB ask Brits to share their teatime with the nation

Frozen food bigwigs McCain are launching two multi-million pound marketing initiatives this week that aim to shine a spotlight on the modern, midweek, British family dinner. The first is a week-long series of consumer generated content TV ads, and the second sees the renewal of McCain’s sponsorship of ITV’s other long-running soap opera, Emmerdale. “The Nation’s Teatime” campaign from adam&eveDDB kicked off last night (October 5) and will see McCain crowd-source teatime content every day for a week from real families across the nation, edited into an ad against the clock and aired on ITV later that same evening, giving real British families the chance to star in their own, nationally broadcast TV spots! All families have to do to participate is share real life video clips of themselves enjoying their evening tea on the brand’s dedicated McCain Teatime hub.

McCain are launching two multi-million pound marketing initiatives this week that aim to shine a spotlight on the modern, midweek, British family dinner

The fly-on-the-wall UGC films, created by adam&eveDDB with PHD, will then be edited into a “Teatime today” advert and aired during a teatime ad-break at 8.45pm on ITV that evening. Of course, we can’t possibly speak to the quality of the upcoming ads, but the spot that aired last night came across very well indeed. Mark Hodge, marketing director at McCain, said: “We already use real families in our ads but this autumn we are taking our focus on real teatimes a step further by asking families across the UK to take part, share their own teatime content for a chance to be on TV that very same day. The campaign will be supported by a heavyweight pre-promotion campaign (featuring Jeff Brazier and Jenni Falconer) across broadcast, print, radio and social, and we feel that involving mums in the campaign and asking them to celebrate and share their teatime moments, will help drive reappraisal around teatime.” It’s also worth noticing that every family who gets chosen will be put into a draw with the chance of winning £500.

In a further effort to cement the brand as synonymous with teatime and to champion “The good stuff that happens at tea,” McCain has also renewed its high profile Emmerdale sponsorship (which began in April 2014) to take the collaboration through to April 2018. For the renewed sponsorship, McCain is launching a fresh new creative treatment which highlights the brand’s continued commitment to championing the nation’s “Real Teatimes,” in line with the overarching brand campaign, which has been running for about 5 months now online The new Emmerdale idents have been made using real fans of the ITV soap having tea whilst watching the show. The families selected to take part all share the same surnames as the famous cast, including the real Kings (from Croydon), Whites (from Stockport) and Sharmas (from Preston). McCain will amplify the real fans of Emmerdale campaign beyond the idents and as part of a wider TTL campaign including; VOD, press partnerships, PR and social media activity. 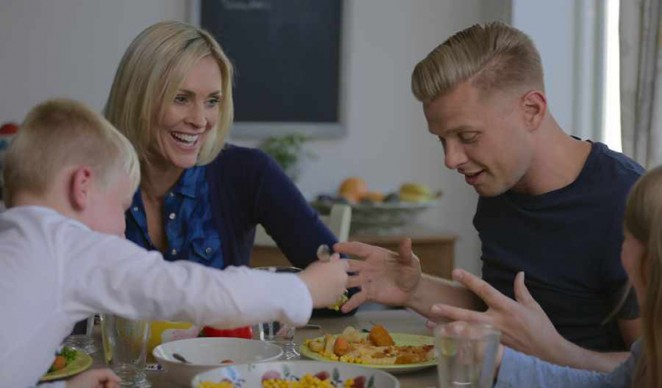 Hodge said of the Emmerdale partnership: “McCain is loving life up in the Dales and we are delighted to be extending our current partnership with Emmerdale. McCain and Emmerdale are the perfect fit and the sponsorship provides us with the opportunity to connect with our core audience and champion those treasured moments that happen in the nation’s homes at teatime.” Gary Knight, commercial content director at ITV, added: “We are delighted to be continuing our relationship with McCain. Emmerdale is a popular staple of the ITV schedule and as such is a great brand fit with McCain.”

In related news, adam&eveDDB also recently released a wonderful new national campaign for energy suppliers SSE featuring an adorable CGI orangutan. This next instalment in SSE’s multi-award-winning “Proud to Make a Difference” campaign features the lovely “Maya,” as she discovers a funfair on a seaside pier and experiences “The wonder of energy in all its manifestations.” Gorgeous, inspiring stuff, with truly spectacular, cinematic direction from Frederic Planchon of Academy Films and CGI by The Mill.