Visions in VR: Is the VR boom over before it started?

It would, perhaps, be unfair to say that the VR bubble has burst, because from where I'm sitting, it looks as though the bubble has barely left the niche market that spawned it. Yet, with so many headsets now sat gathering dust in closets and display cabinets around the world, is it time to finally admit that VR was an interesting fad that never found its audience? Or is it simply taking a little longer to find its foothold than first thought? 2016 was heralded by many in the tech sector as the 'year of VR' and then, when that didn't happen, that mantle was passed to 2017, but, aside from the widely praised release of Resident Evil 7 back in January and a few nifty marketing stunts, 2017 has been a quiet year at best for virtual reality. Research consultancy CSS Insight has admitted that it had vastly overestimated 2016 VR sales when it revised its figures from an expected 2 million units down to 1.2 million, with chief of research, Ben Wood ,recently remarking: “There's no doubt that dedicated VR headsets can be a tough sell.” You don't say. 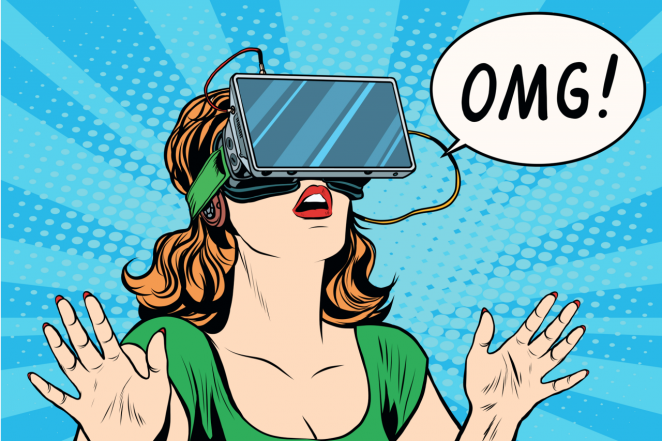 Basically, the VR industry is floating when it should be soaring. Oculus' decision in March to drop the price of its Rift headset and Touch controller bundle from $798 to $598 is not the sort of thing a company does when its products are flying off the shelves and Facebook, which owns Oculus, also announced last Thursday that it would be shutting down Story Studio, its VR production unit. Jason Rubin, VP of content at the studio, said of the closure: “We're now entering the next chapter of VR development, where new creators enter the market in anticipation of adoption and growth, and we've been looking at the best way to allocate our resources to create an impact on the ecosystem. After careful consideration, we've decided to shift our focus away from internal content creation to support more external production.” That sounds to me like an incredibly political answer.

The one area where VR appears to have reached a plateau is the world of gaming, which is arguably the platform with the most to gain and/or lose. The three major players; the PSVR, the Oculus Rift and the HTC Vive, have (through necessity rather than design perhaps) priced themselves outside the reach of most casual gamers, so, for the foreseeable future at least, serious VR gaming will be the sole pursuit of the core gaming crowd. I myself own a PSVR though, and honestly, since I finished the aforementioned Resident Evil, i've barely touched it. This is for two reasons; a lack of genuinely engaging, reasonably priced software and the sheer inconvenience of the thing. The first point can be easily rectified over time, but the second... not so much, at least until the technology improves.

The fact remains that full-blown VR gaming is (right now at least) an incredibly bulky and time consuming pursuit. There's no 'pick up and play' appeal. Indeed, to even consider booting up the PSVR I have to first make sure my girlfriend is happy with my essentially taking over the living room, then I have to clear out the coffee table, position the camera, wipe the lenses, get comfortable, put on my headphones, tighten my headset and then go through the calibration process. Sometimes, the experience is worth the effort, but I'm a 31 year old man with a job and a mortgage with precious little spare time, and most of my fellow VR owners fall into the same bracket, because younger millennials (by-and-large) won't be able to afford it and baby boomers (by-and-large) don't give a shit.

Software could also be a real problem for VR gaming going forward. In a similar manner to the Nintendo Wii, the technology appears to lend itself to piss-poor 'shovelware' titles that have little substance and demand a hefty price tag. This is less of a problem with the PSVR, as Playstation has rather strict quality control measures in place, but the Oculus Store and Steam VR are a little more liberal with what they allow to be published, and some of it is just reprehensible. What VR gaming, and by extension, VR as a whole, really needs, is 'killer apps' that really show off what the medium is capable of. In the world of gaming, this means titles that are more than gloried tech demos (the upcoming Fallout 4 VR could be a good start), but in the wider world of VR, this could mean anything that uses the technology to do achieve something that would be impossible any other way.

One recent application that could really turn those headsets is the real estate market. With the right tools, prospective buyers could be taken on virtual tours of seller's homes, making the traditional ball-ache of house viewing (a pain I know all too well) potentially obsolete. The tech is already being trialled by a number of companies, and allows buyers to view an unlimited number of properties in a small window of time that would have otherwise taken days or weeks out of their calendars. The trend actually landed the second spot on the “Forbes 23 Bulletproof Real Estate Marketing Ideas” published earlier this year, with Forbes citing the use of 3D Matterport technology, which offers an entirely realistic representation of a potential home, as a must for staying ahead in the property marketing sector. The use of VR in property is already being valued as a $1 billion industry globally too, with Goldman Sachs estimating this figure will have trebled by 2020.

The success of recent online 360 music videos by international pop acts like Gorillaz underlines the potential of the platform when it comes to immersive entertainment. David Mogendorff, artists relations manager at YouTube, worked with Gorillaz on the ground-breaking video for their track Saturnz Barz, the world’s biggest VR video release to date. Such was the fervour around the innovative video release that it picked up a record-breaking three million views in its first 48 hours. It has now passed 8.25 million views. And according to Mogendorff, its popularity is just the latest indicator that music fans are increasingly seeking music content of a more immersive, technologically advanced nature. The music industry has always led the way when it comes to technological innovation though, so this is hardly surprising. Even Mogendorff, however, who is clearly a dedicated advocate of the benefits VR has to offer the music industry, insists that artists and labels should proceed with caution. He explained, during an interview with Music Week: “My advice to people doing 360 or VR content would be: does it need to be in VR? What is that going to bring to it that it's not going to have otherwise? Similar to live streaming, are you going to use the technology because it has a purpose or because everyone else is doing it and it sounds like the kind of thing you should be doing? If it has a purpose, it's definitely worth it but it took a huge amount of expertise and skill to make the Gorillaz project so good.” So basically, if it doesn't need to be VR, don't force it. Which leads us neatly to...

Despite the fact that VR could be argued as the most isolating piece of technology ever created, Facebook CEO Mark Zuckerberg remains convinced that isolating people behind high-tech blindfolds can be an appealing social experience. At the social network's F8 developer conference last month, Mark Zuckerberg announced the launch of his company's first social virtual reality product, Facebook Spaces. Head of social VR (yes that's a job) at the company Rachel Franklin, took a turn on stage trying to sell the concept that VR can be a social experience. She explained: “VR is is technology that gives us something that no other technology has before, a magical feeling of presence, the sense that we're really there together, even when we're apart. Because of this, VR is a naturally social platform.” Personally, I'm not buying it. I love VR, truly, but I've also never felt more isolated than when I pull on my PSVR or my Samsung Gear. Maybe the key to social VR is smaller, more convenient, wireless headsets? Or maybe we should be looking elsewhere for the next big thing in social technology. Speaking of which...

Many of the same industry heads that were heralding VR as the best thing since high definition appear to have shifted their allegiances to artificial reality (AR) in recent months. It was evident at F8, for instance, that Facebook now expects that potential will be realised in augmented reality, which can be done using smartphone cameras, without exiling people from actual reality. AR is more flexible, more affordable and more social and the overwhelming success of Pokémon Go, not to mention the various marketing applications it affords, means that, for my money, AT is what will own the immediate future, whilst VR continues to be a remarkable oddity, beloved by the few (myself included), but misunderstood and shunned by the masses. So has the VR bubble burst before it's had a chance to grow? No, I don't think so. I think it just needs a little more time to really figure itself an its audience out. It's a bit of a shame, but I hold out hope that in a few years, when the technology is more affordable and more streamlined, VR will finally have its day in the sun.

Benjamin Hiorns is a freelance writer and struggling musician from Kidderminster in the UK. The opinions expressed in this piece are his and his alone, and do not necessarily reflect the opinions of Creativepool. For more insights on VR, you can read about Mixed Reality, the Emotional Potential of VR and my own VR Predictions for 2017, many of which have been debunked by this very piece, but, in my defence, the tech world moves fast!