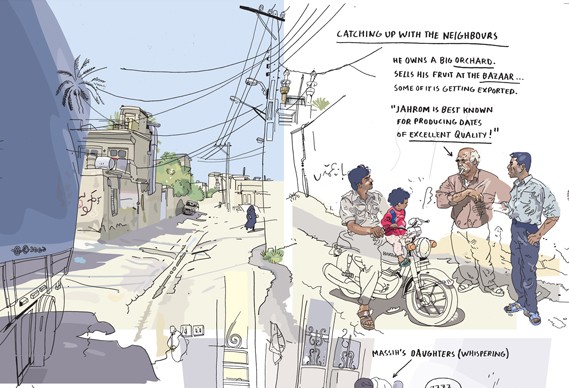 I stumbled upon the V&A Illustration Awards quite by accident. Although I've lived in London for a number of years, I'd never been to that museum, so I decided to pop along to get some inspiration for this week's blog. It's a deceptively large maze of rooms, laid out chronologically, and I spent a couple of hours wandering around soaking it all in. But then, when walking from one room to another (and having not found anything I especially wanted to blog about) I chanced upon the V&A Illustration Awards 2011. Although it's a very, very small exhibition (literally taking up three walls in a small corridor-like room) I found myself spending more time studying the intricate illustrations than I had in any other room.

Editorial Award and Overall Winner 2011
Olivier Kugler A Tea In Tehran
Not all of it was to my taste, I have to say, but there was no doubt that Olivier Kugler was the very deserving overall winner. First published in the illustrated journal XXI, I was absolutely absorbed in Kugler's amazing illustrations entitled A Tea In Tehran. Kugler spent four days accompanying a truck driver, Massih, who was driving across Iran, delivering bottled water to Kish in the Persian Gulf. He started this 30-page illustrated journal by drawing purely in pencil, and then later, using the photos he took along the way, he coloured in these drawings digitally, creating what one could describe as a sophisticated comic book.

The judges admired the detail, richness, energy and humour in this work. They felt it was a beautiful example of the special qualities of drawing and its superiority, in this instance, to photography and text.


Book Illustration Award
Laura Carlin, illustrations to The Iron Man by Ted Hughes
As a child at primary school, I vividly remember looking forward to Friday afternoons, where our form teacher would read us out a chapter from a children's novel to send us on our merry way before the weekend. I remember in particular: Emil And The Detectives by Erich Kastner, and The Iron Man by Ted Hughes. I had very clear images in my mind about what the Iron Man looked like, and I actually marvelled out how similar Laura Carlin's interpretation was. There is something innocent and childlike about the drawings but they carry a much deeper meaning too.

'Some of my favourite writers, including Ted Hughes, deal with huge environmental and emotional themes and yet manage to sprinkle the heaviness with wit and observation,' says Carlin. 'While the people in the story can be selfish and cowardly, the Iron Man takes what comes, even taking on the space-bat-angel-dragon. As a result, I have given him a shadow throughout. He is real, independent and strong and not at the mercy of greed. It isn't until the end of the book when the people realise that they can live peacefully together that they too are given meaning by also having a shadow.'

Book Cover Illustration Award
Lorenzo Petrantoni cover for Boxer Beetle by Ned Beauman
Lorenzo Petrantoni, the winner of the Book Cover Illustration Award (first image, top left of this blog post), has a distinctive modern-historic style that comes from a love of 19th-century dictionaries â€“ a deep source for the illustrations that make up his collages. He says he enjoys giving a new lease of life to images that would otherwise simply be forgotten, collecting dust on a bookshelf. So while nodding towards the historical, Petrantoni's strong graphic images on the front and back cover of Boxer Beetle conversely make it stand out on the shelf.

A lover of old books and monochrome imagery, Petrantoni works only in black and white and did so when working for global advertising agency Y&R as an art director in France, designing advertising campaigns.

Student Illustrator of the Year 2011
Mike Redmond Awkward People In Funny Situations
Mike Redmond, currently at the Royal College of Art, won Student Illustrator of the Year for Awkward People In Funny Situations. 'What inspires me the most is space and time and how they affect everyone so differently,' says Redmond. 'I've been trying to show these situations and stories visually, exploring relationships in time and space. The end of the world is not the end it just goes on to the next end of the world. The award was given to Redmond because the judges liked how he depicted fragile human relationships theatrically played out in this layered piece.


You can see these works and other short-listed entries at the V&A until 17 December.