Did you think you knew everything about advertising? These top 25 historical facts about the ad industry will surprise you.

It is History Month here at Creativepool, which is the perfect opportunity for us to be reminded that there is always something to learn. No matter how long you’ve been a player in this industry, you can expect this or that other particular fact to pop up every now and then, having you go “Ah, right.”

I have collected below the Top 25 historical advertising facts that you should absolutely learn today. Some of these are funny, others rather serious, others may even be illuminating – but most will be historical facts, and they are all incredibly fascinating, providing one more reason to fall in love with this industry every day.

Top 25 Advertising Facts from the History of the Industry

Stick with me to read the best 25 advertising facts below. From the very first billboard ever created to the use of sex and partial nudity in ads, the history of the industry is riddled with fun facts that you can relay around the office – or to your friends and colleagues.

1. Did you know about the very first written ad? A long time ago in Egypt, some slave merchants were using papyrus to inform of trade sales. One in particular is considered to be the very first advertising in written form, following the tale of the slave Shem. It is now kept in the British Museum in London.

2. The most expensive commercial ever was created by Chanel in 2004. It is a fully-fledged romance short film, featuring a forbidden love which is much reminiscent of Moulin Rouge – for more than one reason. Its price was 33 million dollars, 3 million of which were given to Nicole Kidman, who casted in the ad. It is a truly beautiful one, in truth. You can watch it below:

3. There is a nifty little details on watches commercials. Historically, the hands on the watches always rest at either 10:10 or 8:20. This is done to show the brand’s name on the ad and avoid covering it with one of the watch hands, but it’s not the only reason. Hands positioned that way seem to remind of a smile, causing a subconscious positive reaction in consumers.

4. In 2006, Dove would launch a commercial destined to become the first viral sensation in the history of marketing. The Evolution of Beauty hit more than 1 million views in only one night, and it offered a window into the backstage life of the fashion industry. The commercial came 2 years after Dove kickstarted its Real Beauty campaign, which has been influencing the views of the brand ever since.

5. It is said that one of the oldest outdoor advertisements was carved on a stone column in the ancient city of Memphis. It was created in approximately 500 BC. and stated: “I live here, Minos from Cyprus, who can interpret dreams for a moderate fee.” Bold.

6. In 1994, Ikea published the first ad featuring a homosexual couple planning to move in together. It is widely believed to be the first ad from a major brand taking such an important step, making history in the LGBTQ+ community. We even did an article about it!

7. In October 27, 1994, online magazine Hotwired created the first ever website banner, essentially condemning consumer life forever and making the fortune of advertisers worldwide. It was 468×60 pixels, which standardised the size of online banners ever since.

8. All the way back in 1955, Marlboro sales hit $5 billion, an over 3,000% increase over the previous year. It was all thanks to the Marlboro Man ads, which began that year. Prior to that, Marlboro ads would focus on the practical benefits of smoking (such as doctors using them, the pleasure of a smoke and similar), but the Marlboro Man set a standard in lifestyle branding, by showing consumers the image of the person they wanted to be. Five men who appeared in Marlboro ads later died of lung cancer, earning the brand the nickname “Cowboy Killer.” Yes, folks. Smoking kills. Don’t do it.

9. Billboards were first invented in the 1830s by a man called Jared Bell. They were first used to advertise circus acts, but later, in the 1860s, businesses started buying outdoor spaces to advertise their services and products. When the 20th century came along, billboards had already been established and they were more popular than ever before. 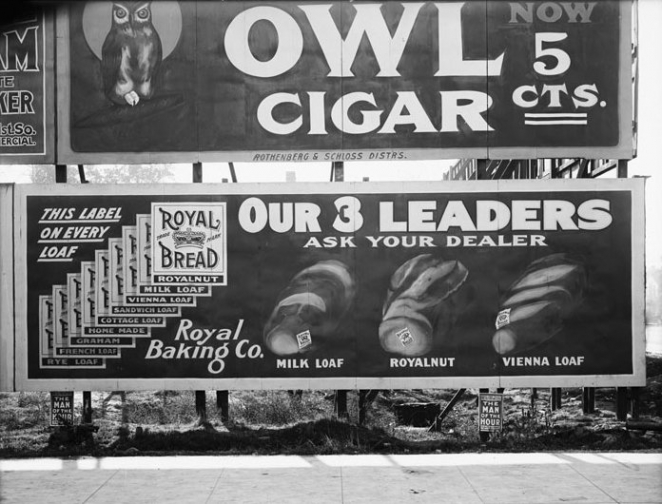 10. George Orwell’s dystopian fiction represents a milestone in English literature. His works are so influential that Apple got in touch with Ridley Scott to launch a “1984” commercial, which made the history of advertising. However, the ad only ran once on American television, during the Super Bowl. Nonetheless, it gained unparalleled coverage, deserving just as much of it as the advertised product itself.

11. The very first US newspaper advertisement was published in 1704 in the Boston News Letter. It advertised an estate in Oyster Bay, Long Island, seeking a buyer.

12. In order to influence positive behaviour, advertisers have historically used a technique called “affective condition.” The advertised product is placed next or in association with other items or concepts that the consumer will feel positively about. It is common, for example, to associate a car brand with lifestyle, freedom and comfort, or a household product brand with babies, sunshine and flowers. This ensure the consumer will subconsciously feel positive about the product as well.

13. Older kids often act as an example for younger children. Marketers know that and, when working on children products commercials, they purposely enlist the help of kids that are older than their target audience, hoping to influence the youngsters. Subtle, possibly unethical, but effective.

14. Windows 95 used the Rolling Stones hit “Start Me Up” in its ads. Microsoft allegedly paid the band $9 million to use it in their marketing. However, it is not uncommon for smaller bands to become more known or viral the moment they are associated with a brand. Apple launched Cansei de Ser Sexy’s “Music is My Hot, Hot, Sex” when the brand used it to advertise its iPod.

15. 2006 was a record year for advertising spend. Microsoft spent over $11.5 billion on advertising, followed by Coca-Cola with $2.5 billion, Yahoo with $1.3 billion, eBay with $871 million, Google with $188 million and Starbucks with $95 million. 2006 was the year when Microsoft released Windows Vista, the next major update from Windows XP (which was widely loved). It was also the year after Xbox 360 was released.

16. You may be cursing spam emails and mass mailers daily, but do you know who kicked it off? It is said that the first email spam mailer was sent out in 1994 by the law firm Canter & Siegel. You have someone to blame for that 10th email about drones and office chairs now.

17. Videotape recording was invented in 1956. It was then that prerecorded advertisements became possible, marking a milestone in the history of advertising.

18. It is said that Mars Inc. was not too fond of ET (yes, the extra-terrestrial). They found poor ET so ugly that they refused to allow M&M’s to be used as a lure for the alien. Reese’s Pieces were used instead, following an agreement with Mars competitor Hershey. When the film became a worldwide hit, sales for Reese’s Pieces went up 65%. A missed opportunity to say the least. 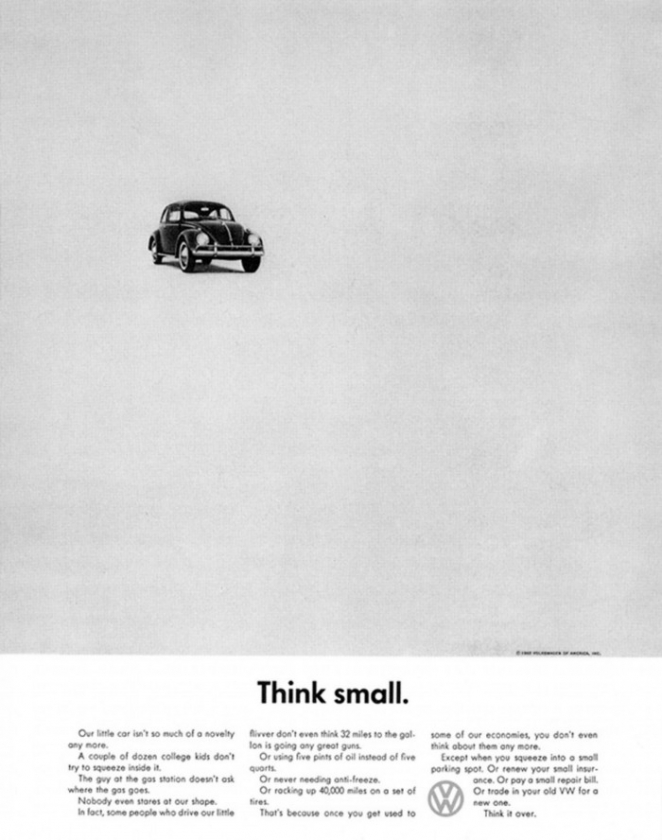 19. In 1959, Bill Bernbach was contacted by Carl Hahn to promote the Volkswagen in the United States. Without a doubt, the Volkswagen was small, ugly, cheap, and also something Hitler had helped creating. The “Think Small” ad that came out of that challenge is still considered one of the most brilliant ads today, tapping into the need of a young demographic who was refusing the urge to buy and consume their way to happiness. It invoked simplicity and resonated with the needs of the time, leading Volkswagen to an unprecedented success all throughout the sixties.

20. The most famous tear in advertising history was shed in 1970. The Crying Indian advertisements were groundbreaking for the time and they helped establish not only a new era for environmentalism, but also the beginning of Earth Day and the Environment Protection Agency (EPA). Over 100,000 people in the first four months took action to reduce pollution, helping reduce litter by 88% by 1983. It is one of the best creative commercials of all time. 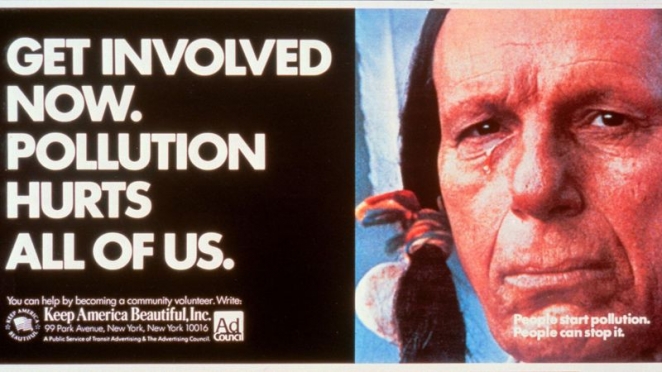 21. In 2009, a Disney ad showed a woman with “Lift my shirt to see more” over her breasts, in an advertisement for Adventureland. It was banned by the watchdog and removed from almost anywhere on the Internet. The ad encouraged users on the Yahoo! web page to drag their mouse to lift up the woman’s shirt. Disney defended the ad at the time by stating they “did not believe it was offensive” and that “ads featuring women’s breasts were fairly common.”

22. The all-too-awful practice of using sex to sell products is not new. It has been around since the early days of advertising, all in the attempt to lure in a certain kind of demographic. For example, tobacco ads would feature pictures of naked women in the 19th century.

23. Ronald McDonald was first introduced in 1963, kicking off a golden era for fast food giant McDonald’s. The clown is so popular that it was accused multiple times of having hooked generations of children into unhealthy diets, such as in 2010.

24. Though papyrus and carved stone were among the first attempts at written advertising, advertisements were often vocal announcements before the invention of the printed press. It was only in 1440 that modern advertising could truly begin.

25. In 1938, radio surpassed magazines in generating advertisement profits. When TV took over, it remained the number one channel in ad spend for decades. Then in 2016, desktop and mobile advertising revenue surpassed TV for the first time, with a $72.5 billion revenue. History is a wheel, they say. I guess we must be the hamsters.

The honest, inspired and aware illustrations of Dima Kashtalyan | #MemberSpotlight

Illustrator Dima Kashtalyan is a believer in the beauty of uniqueness and the power of making a difference through art. Having started out his career as a graffiti and mural artist, Dima's style is beautifully detailed and evocative, just as you...

The creative and explorative collaboration at Rhapsody | #CompanySpotlight

Based in London, Poland and Spain, Rhapsody is a global marketing and production agency specialised in creative, digital, print and brand projects all around the world. At the heart of the business lies something simple: a strong belief in the power...