This Imperfect Trend will improve your self esteem

The imperfection trend has been around for a while, but we’re only just seeing its permeation into the mainstream. In the last couple of months, we’ve seen Asda embrace wonky carrots and courgettes and when Getty Images released their top visual trends early this January, we were instantly caught by their term Messthetics.

Still a great example of this is the #ThisGirlCan campaign, which traded off the idea that women are downing their hair and beauty tools in favour of jumping in the deep end of the pool. This Girl Can sum it up well: “It’s a celebration of active women up and down the country who are doing their thing no matter how well they do it, how they look or even how red their face gets”. The campaign models were all ‘real girls' who weren’t afraid to shy away from their bodies, and who emphasise the benefits of exercise beyond body image.

Are You A Real Girl?

To run with this idea of the ‘Real Girl’, there has been an upsurge in celebrities defying the airbrush and showing the ‘real them’. That means actively proving your #nofilter hashtag is true, and constantly exclaiming ‘I woke up like this’. The embodiment of the ‘Real Girl’ trend is the perennial J-Law and Amy Schumer friendship, which is always the go-to place to find content for that authentic femininity many of the post-Girls generation crave.

In fact, Girls creator Lena Dunham recently went above and beyond to prove her 'Real Girl' status. Having suspected Spanish magazine Tentaciones of Photoshop foul play, Lena rushed to Instagram to denounced this move (only later to discover no such Photoshopping had occurred!). She then made a public statement on her online magazine Lenny to say she's eschewing retouched images for good – and made good on her claim by appearing in a lingerie advert for New Zealand based company Lonely Girls. No photoshop, all body positivity. 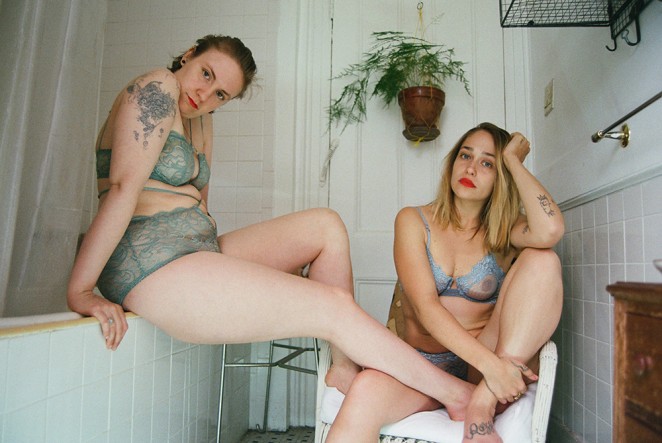 We can also see how Messthetics might appeal to sports brands and male audiences – like in Reebok’s Be More Human campaign, which states it’s for people “who spend their days bloody, muddy and sore, not for bright lights or money, but to simply be the best version of themselves”. This is aspiration for a new generation, who see exercise beyond the means to a fit bod. Instead, exercise is an achievement in itself, the messier it gets, the better.

Maybe it makes sense for sports brands to embrace a trend that allows them to show their product being worn and torn. But we can also see how fashion editorials have been embracing messy details (although at times the chic smear is still an unobtainable trend for everyday wear).

What does this mean?

So, ‘Real Girl’ and ‘Being More Human’ means: sweat, blood and rebellion. It means body hair trending on social media and Instagram influencers like Essena O'Neill giving up their seemingly perfect lives. On the flip side though, these messages can also be a little patronising – it’s doubtless we’ll ever see a complete lack of appetite for the glossy paged magazines screaming the opposite messages.

In 2015, a similar trend was identified: ‘Perfectly Imperfect’. Suggesting that millennials and Generation Z are moving away from their ‘fake’ online lives. Social media trends have seen more people turn to Snapchat’s ephemeral posts – where you can show your friends that big spot in the middle of your forehead, safe in the knowledge it’ll disappear in 2 seconds. And there was an upsurge in social media users creating ‘Finstagram’ accounts – a place where they can go private and share with only their friends. The idea is that the posts you share here are embarrassing moments, in-jokes or funny memes – leaving your ‘Rinstagram’ (yup – ‘real Instagram’) to perpetuate your arty, foodie lifestyle. On the downside, with both Snapchat and ‘Finstagram’, although we see millennials and Gen Z’s willing to admit their less-than-perfect side, it’s still done undercover.

Ultimately, though we seem to be seeing a shift away from a high-gloss, luxe look to something more realistic and attainable. Comparing ourselves unfavourably to celebrities may well become a thing of the past. Self-esteem can only grow when our hero of the Messthetics trend is the down to earth and clumsy Jennifer Lawrence. So, be muddy, be sweaty… you can even fall over at the Oscars if you like.