Thinkmodo have made yet another viral video (remember their Devil Baby ad?), and this time its not as scary and a bit more believable. Or at least, it’s believable that a New York City taxi driver and Meter Maid could get into a huge argument. The twist comes when the tiny copy goes all out Hulk and lifts the cab straight off the ground. This special effect work is seamless, and stunned the onlookers who were trying to make sense of the situation.

Actress Jenni Ruiza plays the 5 foot 3 inch Meter Maid brilliantly, with just the right amount of attitude to get in a fight with the cab driver. As events unfold, the crowd can be heard saying: “That’s girl power!”

The advert on top of the cab might give the game away, for the more eagle eyed amongst the crowd. The stunt was part of a marketing campaign for a new app carlister.co – basically a digital AutoTrader, that lets you take a photo of the car you want to sell, fills in the paperwork for you and creates a listing. Users can also buy cars.

CEO Bryan Harmon specifically called upon James Percelay and Michael Krivicka’s Thinkmodo after seeing their more horrifying takes on marketing stunts. It’s got to be one of the most laid back briefs ever given, apparently he told them the goal was to show how easy it is to buy and sell cars. That’s it. So Thinkmodo came up with the trick. And in order to transport the car, the team had to transfer 1,000 lbs of steel to the front of the car for balance. The taxi is actually a 2005 Ford Escape, painted with fake taxi signs. The engine was removed and steel plays placed in the trunk as a counter-weight. Not the easiest stunt to pull off. But pull it off they did, and it looks great. 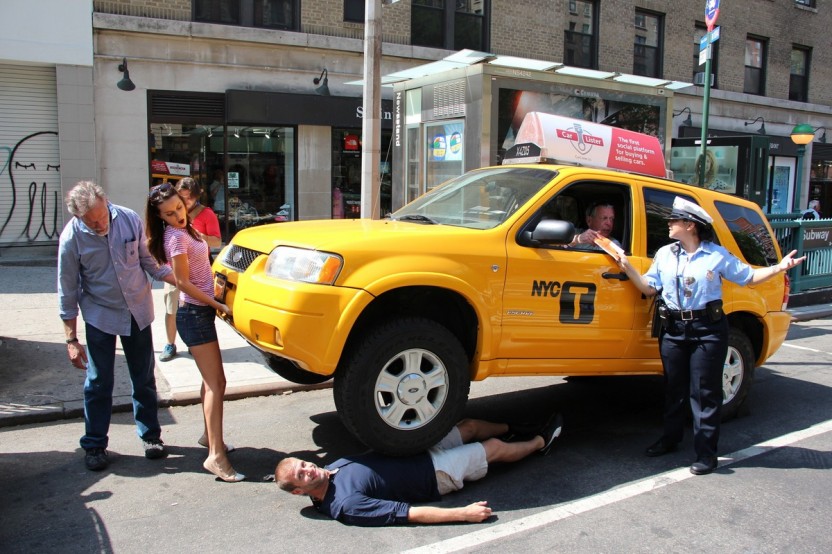 Thinkmodo pride themselves on putting together viral video campaigns, meaning their work is often tongue-in-cheek with that shareable x-factor. Percelay is a former Saturday Night Live producer and Krivicka’s background is in filmmaking – so they’re well placed to make marketing that’s funny, fast-paced and aimed to go global. There’s no real formula for creating viral content, but Thinkmodo have the knack. The best bit about their videos is the sheer amount of reaction they can garner from something that to the YouTube watcher we know is faked. Also at 0:41, check out that guys snazzy gold phone receiver. Where do we get one of those?