Anyone who has ever played through the classic sci-fi adventure game Deus Ex probably left the experience with one of two thoughts: “When dealing with biomechanical augmentation, at what point do we truly begin to lose our humanity?” or “Holy shit that's cool, I want that!” If you fell into the latter camp (as I myself did), then there's some exciting news coming out of the University of Illinois. A team of scientists there have developed a flexible electronic skin, which can be used to monitor the brain's electrical activity. It only lasts for about two weeks before it falls off, so it's technically more of a temporary tattoo, but the fact remains, this is a tattoo that will allow you to control your smart devices with your mind!

A team of scientists at the University of Illinois have developed a tattoo that will allow you to control your smart devices with your mind!

The device consists of a series of gold electrodes, which are hidden discreetly behind the wearer's ear. Right now the device is still n the testing stage, with test subjects so far only able to use the device to spell out simple words in their minds, which were then translated onto screens in front of them. As well as the more banal (and undeniably lazy) implications for this technology, according to researcher John Rogers, it can also be used for more practical uses, such as detecting seizures. Personally though, I'm more excited about the gaming implications. Just imagine the possibilities!

As convenient as Google Maps is, it's far from a perfect program, and one of the most infuriating qualms most users have had with the app is the usability of the directions feature. Thankfully, Google recently gave Android users the ability to send direction commands from their computers to their phones, which means the laborious mobile system we've all grown to hate can now be completely circumvented. Of course, it doesn't work with all devices, but it works fine with my Samsung Galaxy S6 so make of that what you will.

The great and beautiful Ninsecto 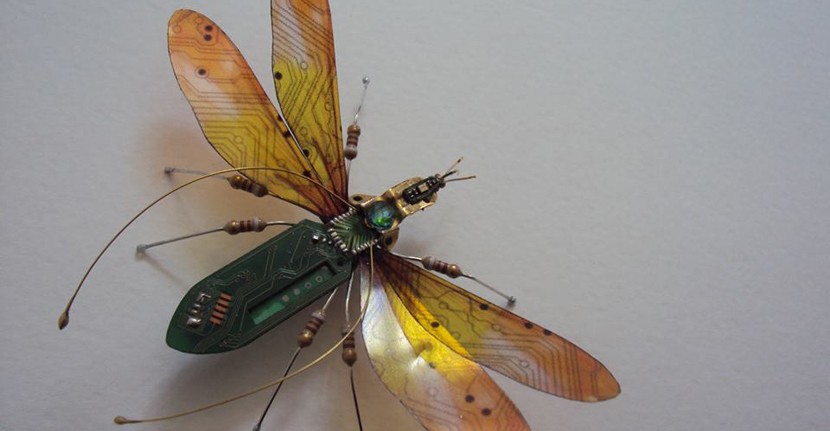 I have to admit that I'm not particularly keen on modern art. As much as I appreciate the thought processes behind it and the enthusiasm put into it, the vast majority of it leaves me cold. This, however, I could really get behind. I'm referring to the unique sculptures designed by UK artist Julie Alice Chappell. Whilst enrolled on a Fine Arts degree, she decided to embark upon a new project called “Computer Component Bugs,” which are literal bugs (butterflies, dragonflies, beetles and more) built entirely out of discarded computer components, including those pulled from old Nintendo consoles

“Computer Component Bugs” is a project by Julie Alice Chappell, who has built literal bugs entirely out of discarded computer components

Not only do they look fantastic (and you can even buy some of them yourself though her Facebook page), but there is a meaning behind it all. As the artist herself explains, she is trying to highlight the “Dangers of planned obsolescence and e-waste in the environment.” She adds that the found and manufactured materials she finds “Comment upon the accumulation of cultural debris and become their own subjective universes as they build form into patterns of the communicative behaviour of life processes.” So before you take that old computer to the tip, think twice about what it could become in the right pair of hands. One man's garbage really is another man's treasure.

One of the most notable pieces of technology news this week was Google's announcement of its new wireless program, “Project Fi.” According to an official announcement from the internet kingpins, the new software will allow them to “Work in close partnership with leading carriers, hardware makers, and all of you to push the boundaries of what's possible, by exploring new ways for people to connect and communicate.” So far so vague (what more did you expect), but the video below sums it all up pretty well, and is reliably chirpy and well-made to boot!

The service marks Google's first shot across the bow when it comes to wireless internet access, and it will, of course, only initially be available in the US, where Google has already announced partnerships with Sprint and T-Mobile. Also, at least initially, the only phone that will be able to make full use of the technology is Google's own Nexus 6 device. More solid news is thin on the ground at the moment, but Google has stated they want Project Fi to offer the “Highest quality connection” possible, with “Easy communication across networks and devices,” all while making the service as simple to use as possible. The payment structure has also been unveiled, and is surprisingly flexible, with a basic $20 giving you basic talk, text and WiFi tethering capabilities, with an additional $10 for every GB of cellular data used. It's certainly pricey, but then it is early days for the service.

OK so we'll finish with something pretty cool. We all know that parking is by far the least sexy and interesting aspect of driving, so what if you never had to park your car (manually) again? The upcoming BMW 7 Series sports a feature that could make this dream into a reality, with a remote control parking feature that allows it to manoeuvre itself in to and out of tight parking spaces. Whilst the design of the car has yet to be revealed, many features including a touchscreen console with gesture-based features and the unique Display Key that features an LCD control screen have already been touted. Check the video below for more info.

i never asked for this