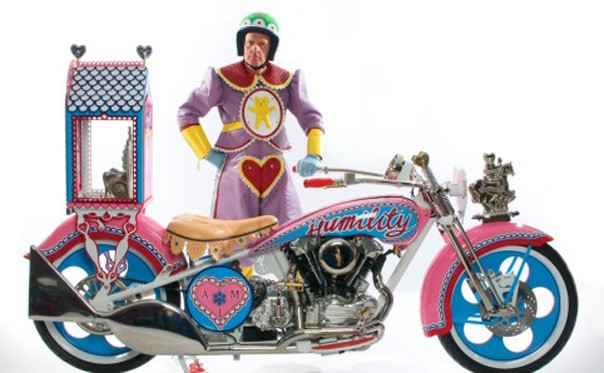 The Tomb of the Unknown Craftsman

Turner Prize-winning artist and craftsman Grayson Perry is one of the most recognisable figures on today's art scene. Perhaps due to gaps in my knowledge and certain preconceptions (or misconceptions), I had never really taken to him before dressing up as he does as a little girl which, to me, seemed a little bizarre even mildly sinister. But I went along to his exhibition at the British Museum last weekend, The Tomb of the Unknown Craftsman, and I was astounded by his exceptional talent, imagination and skill.

Perry spent two years in the expansive archives and store rooms of the British Museum, examining the artefacts from generations gone by, created by unknown artists and craftsmen. His aim was to create an exhibition in the form of a tribute, featuring his own work alongside that of the many anonymous, skilled individuals who have contributed so richly to the world's cultural heritage. Referring to it as 'a short tour through my head', he chose artefacts to which he can relate his own work, and created new work this very year, based on that inspiration.

When one enters the exhibition, there is a text written by Perry almost a disclaimer asking visitors not to necessarily search for deeper meaning in the objects he has chosen, but to look at them purely on an aesthetic level. This is an exhibition for the general public, not for the learned critical few. He is not a historian, he says, but an artist. He sees the exhibition's visitors as pilgrims who have come in reverence to the people who have contributed to our world art heritage. Indeed, he believes that the title of the exhibition The Tomb of the Unknown Craftsman can be applied to the British Museum as a whole.

Outside the entrance is Perry's custom-made motorbike, predominantly decorated in pink and blue, and with a pseudo-child seat on the back for his teddy bear, Alan Measles. He's not just a teddy bear to Perry, though; he describes him as being the living embodiment of God. On each side of the fuel tank are the words 'patience' and 'humility' two key words which I feel sum up Perry's approach to and appreciation of art. He is clearly in awe of the exhibition's unnamed contributors and his own work is so intricate and cerebral (as well as remarkably original) that each pot, tapestry, installation and sculpture seems to reveal his inner thought processes with striking honesty.

He took the bike itself on a pilgrimage of his own from England to Germany, dressed head to toe in his bespoke child-like motorbike suit. He certainly cut a bold figure which seems to shout out his love for the experience. He remarks, 'What's interesting about the custom bike scene [is that it] is a relevant and thriving example of custom craftsmanship for the customer, in the same way as a suit of armour or an embroidered robe would have been for a Tudor king.'

Hung on one large wall, The Map of Truths and Beliefs (top banner image) is a monumental tapestry, intricately thought out and full of symbolism in every stitch. I must have stood admiring it for a good ten minutes as most other visitors seemed to. The ceramics are also masterful and contain messages (literally) at every angle. You Are Here is a tongue-in-cheek pot which discusses why people came to the exhibition at all 'the pot equivalent of a reality TV show', says Perry. It is covered with speech bubbles emanating from the mouths of various museum-goers, dressed in the relevant stereotypical attire. 'I liked the poster', 'There was such a buzz about it on Twitter', 'I had a free ticket', 'I just wanted to satisfy myself that I am more clever than this celebrity charlatan', and so on. A ceramic wink to the amused viewers.


At the very end of the exhibition, given pride of place in the centre of the room, is Perry's eponymous exhibit, The Tomb of the Unknown Craftsman. It is a cast iron ship sailing into the afterlife, adorned with casts of objects and artefacts taken from the museum's collection ('freighted with the greatest hits of the British Museum'), and depictions of what it means to him to be an artist. At its centre is a flint axe the first ever artistic tool, perhaps and the masts are laden with glass bottles which are described as containing blood, sweat and tears.


It's a powerful image with which to leave the exhibition although the rest of the exhibition gives ample food for thought already. 'I hope that when people leave, they want to make something, they want to look at the world afresh,' says Perry. I may not have the tools or the skill to do the former; but as for the latter, I will certainly look at Mr Grayson Perry afresh; he has gained one more highly appreciative fan.

You can see Grayson Perry: The Tomb of the Unknown Craftsman at the British Museum until 19th February 2012. For a further insight into what to expect, watch the video below: