What do you see when you look at the image above? The face of the most hated man in the world? Or a subtle protest against censorship? Maybe both.

Of all the dirty tricks currently being pulled by Adolf Putin, the blatant and violent censorship of dissenting voices is perhaps the dirtiest and the the trickiest. It might lack the bombast and horror of blowing up schools and maternity hospitals, but it’s so much more insidious because it’s a move that completely undermines and underlines the importance of free speech.

Putin has effectively silenced all independent voices and, as such, it’s important to help Russian citizens gain access to objective reporting about the war and the increasingly deluded regime. To strike back against this oppressive Russian censorship and help deliver the unfiltered truth to ordinary people, a freelance team in LA took an idea dreamt up by several Ukrainian creatives and really ran with it. 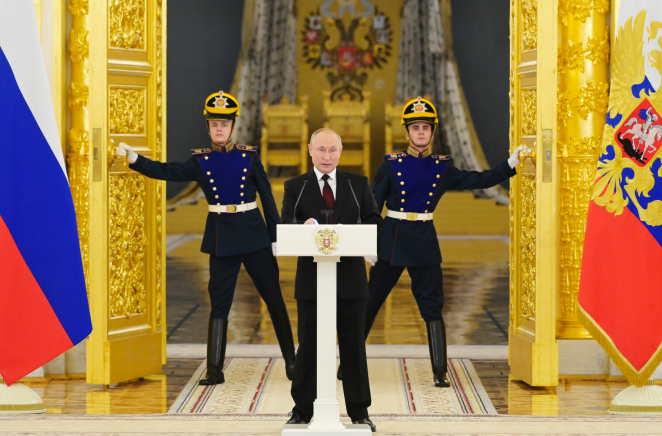 While open protest is being met with stern resistance in Russia and accessing legitimate news is seen as a punishable offence to the Kremlin, Brian Farkas and Tylynne McCauley from B&T Creative decided to hit Putin where it hurts - his ego. They have developed a system that allows anyone to hide Russian-language information as metadata within images as a means of spreading the truth to the millions of Russians being lied to by their government.

Hidden in the metadata of these images is a “Guide to accessing online resources blocked by Russian authorities,” published by Meduza (an independent Russian news source). Recipients just have to download and right click “Get Info,” and the full text can be found in the description.

As Russia continues to block access to independent news sites and social media, many citizens only see state-run propaganda and don’t understand the truth of what is happening in Ukraine. The hope is for this project, called “PNG Protests,” to play a small part in helping to change that and inspire change from within.

According to Brian: “Control over the narrative is vital for any authoritarian figure. There was something that felt quite powerful about hiding messages of truth in images of a man who’s doing everything he can to squash it. Especially someone who’s gone to great lengths to organise photo shoots to craft a very specific image. It’s turning Putin’s own propaganda photos against him.” 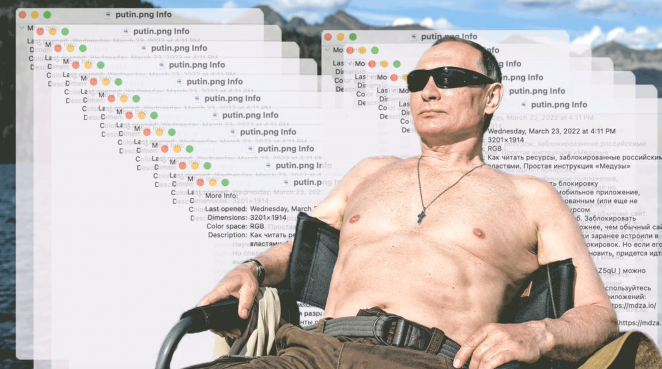 Perhaps the best part of this project is that just about anyone can get involved. Images can be easily and discretely transmitted via email, SMS, or Telegram and anyone with even minor Photoshop skills can make one, using any image, and include any information they deem necessary. There are many potential use cases from publishing blocked news, to sending messages and organising protests.

Brian continues: “What also really excites us about this project are the possibilities of where it can go. The beauty of this technique is that it’s simple enough that anyone can apply it to conceal and spread their own message, which is why we created a guide for starting your own PNG Protest. We hope this becomes a tool for dissent and sparks more applications beyond what we could have thought of ourselves. Big change can start with small cracks.”

Want to get involved yourself and start your very own PNG Protest? An instructional guide along with some initial images are available here. Feel free to share them in the comments below!

Creativepool March 30th, in the morning

You are talking about Russia now - not being in Russia now. How do you know what people know?

All people know that there is a war going on. There are no myths. At the very least, people from Russia can call their relatives and friends in Ukraine directly. And find out - "the real thing".

You cite "Medusa" as an independent news source - but "Medusa" is the most yellow press possible. There are stories about aliens and time travel. It's a total sci-fi story.

It's amazing how people come up with and adapt to trends. You can't call it anything else. It would be something to do, as they say.

The best help to the people of Ukraine is material help, it is physical help. It does not picture, it's fake articles and endless discussions.

Everything above is the opinion of a man with a Ukrainian surname and roots, who is now in Russia. And who has many friends in Ukraine among !!! ordinary people.

Mankind is coming to a certain standstill. And now is the time to create together a common world, a common plan - a future possible for all people.

Let there be peace!