With so many other emergencies circling us right now it can be unfortunately easy to forget that the most critical existential crisis remains the environment. Thankfully, the design industry hasn’t forgotten. Or at least that’s what they’d like us to think.

Recently, an initiative formed by design and innovation consultancy Morrama and creative group URGE Collective gained the full support of the Design Council, as part of their Design for Planet mission. Known as “Design Declares,” the initiative is “a climate emergency declaration campaign to encourage communication, digital, industrial, and service designers to take action on the climate and ecological crisis. 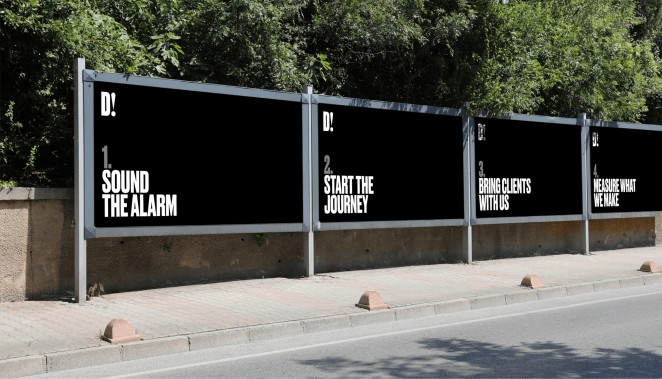 The campaign urges designers to acknowledge we are in an emergency of climate and nature and offers Eight Acts of Emergency as starting points.  Design Declares will provide a toolkit, which proposes a set of actions, tools, and insights for each Act to support designers in making changes.

3. Bring clients with us

4. Measure what we make 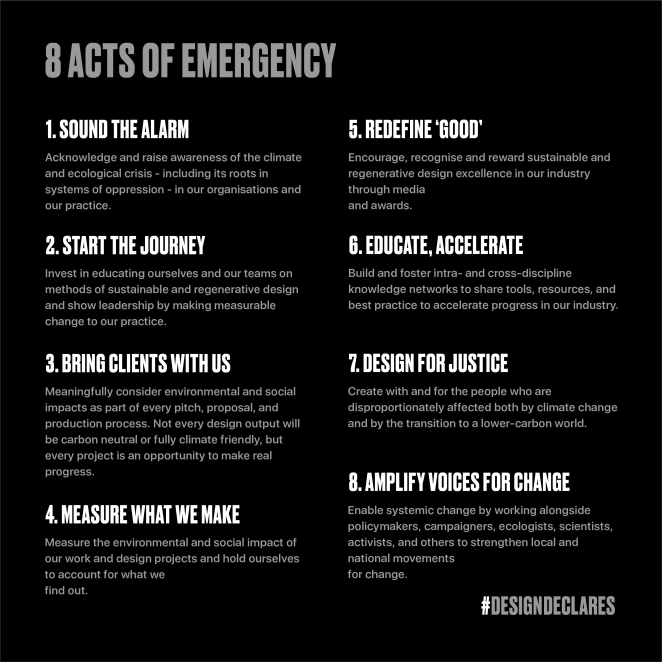 Design Declares will provide a toolkit, which proposes a set of actions, tools, and insights for each Act to support designers in making changes. The toolkit signposts work by other designers and institutions, including the Design Council’s Design Value Framework.

Voluntarily put together, the idea of the toolkit is a living and breathing document, continually updated, and developed as the Design Declares community grows.

The campaign urges designers from all disciplines to acknowledge we are in an emergency of climate and nature and offers Eight Acts of Emergency as starting points. There is no requirement to already have policies and action plans in place, but there is an understanding that by signing you are committing towards an improvement in the reduction of your climate impact. 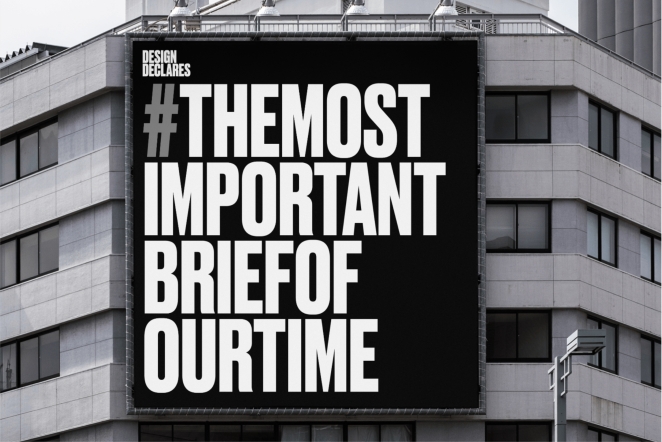 Of course, there’s a big difference between calling attention to something and taking action. If you were being particularly cynical you could say all Design Declares is really doing is declaring the obvious. But it design sector is one driven by consumption and reliant on production. So it’s important they acknowledge the role they have play in changing this system.

Alexie Sommer, Design and Communications Director of URGE Collective, said: “If this year’s heatwaves aren’t enough to engage the design industry that there’s work to be done, then try to imagine what it’s going to be like in ten years’ time. We need to create an alternative and positive version of the future through design, and the time to do it is now.”

It’s tough to argue with that and if you are inspired to join the fight, Design Declares is open to all individuals and institutions working in industrial, digital, graphic, communication and service design. To declare, you must be a company with an office in the UK employing at least one full-time designer. It also welcomes declarations from practising freelance designers who are registered as self-employed in the UK.