Forever Beta launched a campaign this month to support Big Issue vendors after the difficulties they have faced over the last two years.

Created in partnership with Ocean Outdoor, the “I’m here” campaign draws attention to Big Issue vendors, reconnecting them with their local community using technology. Through these personalised billboards, the campaign lets everyone know when their vendor is at their pitch – giving them the biggest voice possible. If the vendor is busy, customers will be able to buy a magazine from them through the QR code on the digital screen.

“I’m here” piloted with three placements around busy Westfield London pedestrian zones. Each screen connects to GPS beacons within a vendors’ jacket. Whenever the vendor walks close to one of the digital screens, the geolocation technology responds, triggering a supersized version of them on the nearby screen which then points towards where the vendor is. This lets the local community know when they are at their pitch, directing passers-by to pick up their latest copy of The Big Issue.

The campaign, which broke on March 15, was a winner in Ocean’s annual Digital Creative Competition, which celebrates and facilitates new and creative DOOH ideas. To learn more about it, we go #BehindTheIdea with Forever Beta’s James Halladay and Max Sizeland, the creatives behind the campaign.

There wasn’t a brief as such. We had an innovation idea to support The Big Issue’s vendors on the street, and Ocean Outdoor’s Digital Creative Competition gave us the opportunity to test it out. The charity category awards innovative digital out-of-home ideas, so it seemed like the perfect fit.

We started with a brand truth and a media opportunity. We knew the past couple of years have been challenging for The Big Issue, particularly for their vendors. Even now things are returning to normal, people are avoiding interacting in person.

We knew that for selling a street magazine, digital screens could be a powerful way to help them stand out – especially if those screens are at street level, and massive.

Our initial ideas were about celebrating vendors now that they’re returning after the pandemic, and giving them something to talk about on the street. It was then a case of getting the campaign in front of our client at The Big Issue, and luckily they loved it from the off. 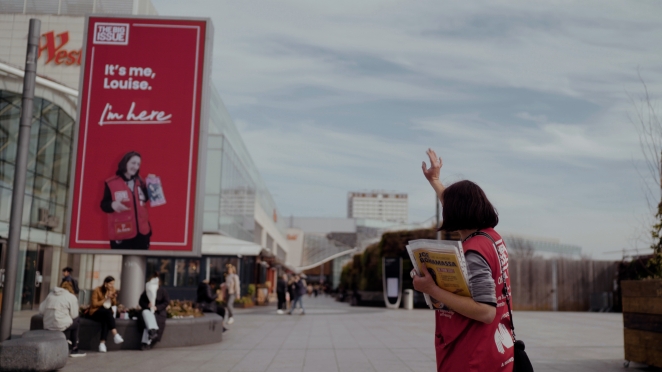 Once we had the initial thought, it was more a case of refining it. We loved the idea of using geolocation technology to point passersby towards Big Issue vendors nearby. But selling the magazine is all about human relationships – those little conversations, the familiar faces, their regulars.

A key part of the process was capturing this human element. It’s why we wanted to use supersized, video versions of our vendors on the digital screen, alongside their real names and personalised headlines. The “I’m here” campaign line captures this spirit too – more than just a physical location, it talks about the visibility of Big Issue vendors within our society.

This was, in effect, a proactive project from the beginning. Every member of the Forever Beta team got their hands dirty and went above and beyond to make it happen. Not to mention more than a few favours from production partners along the way, and the incredible team at Ocean Outdoor. It quickly became a passion project for everyone involved.

The best example of this was redesigning The Big Issue jacket to incorporate beacon technology. These iconic red vests have remained the same since the magazine started, so it took some creative solutions (and a little bit of luck) to get everything working seamlessly.

In terms of challenges, it really came down to understanding vendor behaviour. The human bit. Over the course of a typical day, every vendor has their own routine, their own way of selling. Coordinating that and all the various personalised ads was a logistical challenge, to say the least.

Luckily, we were working with some of the most advanced media sites in the UK today – as well as the talented bunch over at Ocean Outdoor. Things have developed to a point where positioning can be so accurate, and response times so low in latency, that our campaign worked seamlessly with the movements of our vendors.

This project combined the traditional and the new. We created hundreds of assets, filming our vendors in dozens of different poses with their own unique gestures. Then, wherever our vendor went, we had a piece of creative to match – down to their exact location.

We then paired this with off-the-shelf and bespoke apps. These let the beacons within the jackets interact with the billboards, serving personalised ads for each vendor. And all worked together seamlessly behind-the-scenes.

As a charity project, it was important to make the technology as cost-effective as possible. Using off-the-shelf tech meant that, while this was a pilot, we were creating a usable technology that could be rolled out to vendors across the country.

The biggest realisation for us was how hardworking vendors are. Many people assume that Big Issue magazines are handed out for free and sold on with little risk, but it’s not true. Vendors are entrepreneurs of a kind. They buy their magazines and sell for a profit; if they don’t sell, they make a loss.

Vendors are vulnerable people who have chosen to go out there and engage communities to support themselves. So it’s really important for us that we give these little ‘businesses-of-one’ the leg-up they deserve. 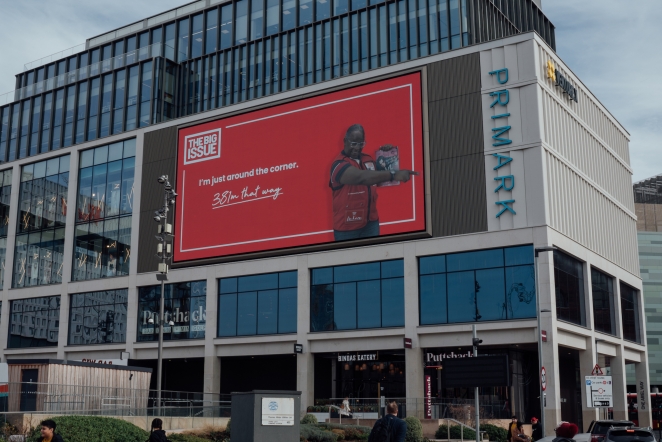 You could see this as a very tech-driven campaign but, at its heart, it’s all about human connection. For vendors, selling The Big Issue isn’t just about shifting magazines, it’s about building long-term relationships. The campaign reminds local communities that their vendors are still here in the biggest, most visible way possible.

Not as long as you might think, although it certainly felt longer at times (versioning, we’re looking at you). While we won the competition in October, production only properly started in January. So five months altogether, give or take.

The Big Issue is part of the fabric of communities across the country, and the brand was more affected than most by the pandemic. For vendors, local relationships and human connections are so important to them.

Our campaign makes them visible again, cutting through ‘compassion fatigue’ by making them a bigger character than before; more a local superstar than a stranger. By using technology in this way, they can start more conversations and more human connections – and hopefully make up for some of the losses left behind by the pandemic.