Tattooing is a varied art form, the oldest tattoos ever discovered were found on the body of Ötzi the Iceman who lived sometime around the late 4th millennium BC. And over the centuries tattooing has been used by clans, oriental cultures, sailors, criminals and circus performers to demarcate good luck, social status, criminality and physical health (to name but a few).

But in all of its previous incarnations, the tattoo has never been able to move. Until the digital wizards at Lisbon-based studio, Oskar & Gaspar, used video mapping technologies to breathe new life into the ancient practice.

Sadly, it was all an optical illusion. But that didn’t make the innovative angle on video mapping any less sensational, especially given no post production was used in this video’s final edit. What you see here, is exactly how the spectacular twist on technology played out on the evening.

Light plays as well as depth and movement illusions gave flow to a wide range of tattoo styles, creating spinning mandalas, flapping origami birds, supernovas and even a winking, eyebrow-raising portrait of Salvador Dalí that looked like something straight out of a Harry Potter film.

Oskar & Gaspar are well known for their digital trickster-isms, but their latest project propelled them into a whole new stratosphere. Their ink-mapping work has been shared by Ashton Kutcher, Lil Wayne and George Takei and was awarded three gold prizes: two in the Digital category and one in the Public Relations category at the Lusos Creativity Awards.

So how did they do it? Well it took a team of 40 people to work on both the model and behind the scenes preparing the image capturing and the setting as well as the lighting, content creation and projection. Every single animation started out as a photograph of a tattoo, which was then rendered as a 3D model and incorporated into a motion sequence. The human model was then positioned in front of the projector while video-mapping software was used to line up the animated media with the original tattoo to get everything to fit within the projection area. 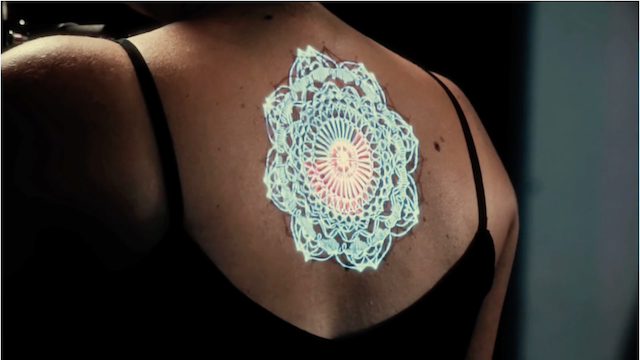 Animated tattoos on both sides of a model's body took about two hours to produce, while other demos needed about 45 minutes of preparation. But with such instantly breathtaking results, it’s easy to see why this labour of love was undertaken. Tattooing may be an ancient art, but it’s future possibilities were made to look magical.

Anyone recently at the 2016 Cannes Lions will have been lucky enough to catch more of Oskar & Gaspar’s technical delights during their performances at the festival’s opening and closing galas. But hey if you weren’t, catch up on everything you need to know about the Cannes Lions winners here. 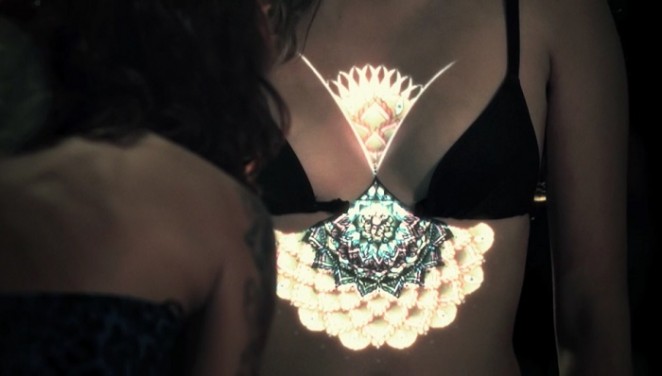