SodaStream, the world's leading sparkling water maker brand, took its commitment to looking after the planet even further this year by celebrating Earth day throughout the entire month of April. The crux of the campaign was a pledge to save a million baby sea-turtles from plastic pollution in the oceans via a partnership with SEE Turtles, a charity that works to protect sea turtles worldwide.

In doing so, SodaSteam partnered with legendary Baywatch star David Hasselhoff to launch its environmental campaign video, which embodies SodaStream’s now notorious playful tone of voice. The Hoff reprises his iconic role as a lifeguard playing tribute to the popular series. But this time, rather than saving beachgoers from the water, he is saving turtles from plastic pollution and showing consumers how they can help too.

To gain further insight into the video at the centre of the campaign and go behind the idea, we spoke to SodaStream’s Global CMO, Karin Schifter-Maor.

Looking after the planet is a core part of our brand mission and an integral part of our DNA, which is why every year we celebrate Earth Day. However this year, we set out to find a “twist” and step it up a level for our 2022 Earth Day activity.

So this year we decided to make it a month-long initiative, incorporating our famous light-hearted tone of voice to share important environmental messages, whilst empowering people to make a tangible change with us.

The initial idea came from within the SodaStream marketing team pretty naturally and early on, I think this was largely due to the goal being very clear to each and every one of us. Then we just had to find the perfect NGO and talent partners that aligned with our brand mission.

In parallel, we started looking for global NGOs that help sea turtles and turned to creative agencies to find a “sharp” idea for the campaign. Essentially, these two things happened at the same time – we found seeturtle.org and our creative lead Alon Seifert, who had amazing out-of-the-box hilarious ideas which we knew would resonate with our audience.

It was easy and most importantly fun, thanks to the amazing production team that we partnered with, Jiminy productions. They truly made our craziest dreams come true!

Of course other than “betting” on the weather, as we were shooting during the winter on the beach, we couldn’t ignore that we had to contend with COVID-19. Until the day of the shoot, we were scared that it might get cancelled due to the constant changes of restrictions.

Also, David had to get urgent knee surgery not long before the shoot, and we were afraid that this might have an impact. However, the stars aligned and we were able to pull everything off without a drop of rain, and for the most part, David’s knee held out.

Other than regular video editing software, one of the most interesting and also challenging parts of the project was to create the 3D animated turtle seen in the video. 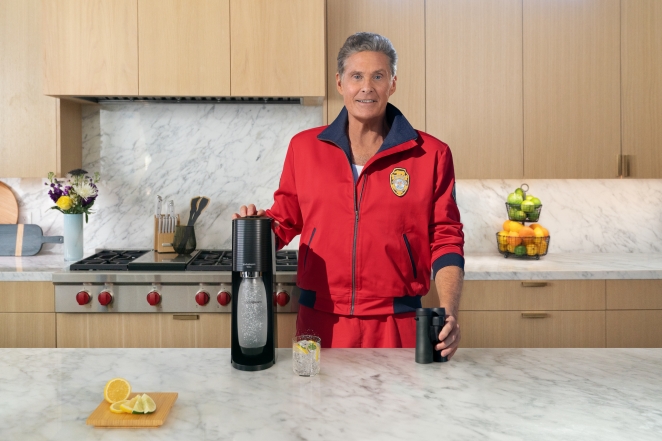 One notable thing was that David had knee surgery right before the shooting, and couldn’t perform the iconic “slow-motion running” scene. This scene was crucial to the video, so we made up for it by bringing his stunt double, who we also found out is a close friend of his, to the set and he replaced David in the running scene! David also surprised everyone on set by bringing his original red bathing suit from the Baywatch series!

This is why we’ve decided to take our commitment further than just celebrating Earth Day and instead, celebrating Earth Month by saving one sea turtle for every machine sold during April. Sea turtles are a key species in the ocean and without them, the natural ecosystem may be disrupted, so it’s up to all of us to try and do what we can to prevent this.

We started thinking about this campaign about nine months ago. It really is like a pregnancy, and we just gave birth to this great campaign!

As a brand, we hope that we can help people make the small changes in their lives that’ll make a big difference for the planet. Each of our campaigns has this same mission, and we hope that by remaining consistent with our goal, we’re inspiring and empowering people to join us on our machine to take care of the planet.