Electronics giants Samsung recently unveiled a new digital in-store display known as “Centre Stage,” in an effort to show off its vast portfolio of appliances to customers in true-to-life size. The display, which launched yesterday at a pilot store in the UK, was developed by Samsung in collaboration with their marketing solutions company Cheil Worldwide and interactive marketing firm The Barbarian Group, who created the 'Cinder' open source creative coding software that powers the display. It uses an interactive, 4K Ultra High Definition touch-screen screen, which allows Samsung to display their entire product range from one (admittedly gigantic) screen, without the need to invest in expensive and expansive showroom space. 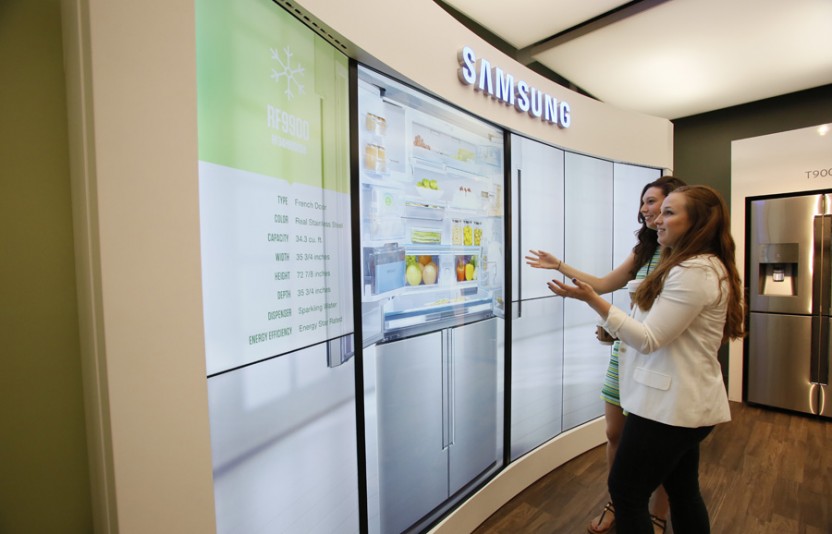 Centre Stage in use

Yoon C. Lee, Samsung Electronics vice president, believes that “By blending the physical with the digital,” they are “Transforming the way consumers experience” their products, as well as making it that much easier to shop for appliances and make informed decisions. He goes on to say that Centre Stage was created as a reaction to modern retail spaces, which are getting more and more cluttered. He says that CentreStage “Offers virtual access to every Samsung home appliance on the market with an immersive UHD display, engaging graphics, and clear explanations of product features and benefits.” The display is a fool-proof and visually commanding “One-stop-shop for all appliance needs,” which Samsung feel's will appeal to consumers from all demographics “By enhancing and making their home appliance shopping experience easier than ever.”

Centre Stage is a fool-proof and visually commanding “One-stop-shop for all appliance needs.”

Simon Hathaway, president and global head of retail experience at Cheil, said Centre Stage is a “Game-changing retail innovation,” which will “ Reset people's expectations of the in-store experience,” and allow the company to “Create go-to retail environments in the most convenient locations for their customers”. He says it's been a “Hugely interesting project to work on, and one that has only been made possible through the partnership between Samsung Electronics, The Barbarian Group and Cheil.”

In related news, Cheil was recently named as the only Asian agency on the YouTube Ads Leaderboard winner's list with it's Samsung Mobile ads “The Training,” “The Match Pt. 2” and “Multitasking.” The YouTube Ads Leaderboard showcases the most creative ads featured on the video-sharing website, with rankings determined by an algorithm that factors in paid views, organic views and audience retention. Moon-kyo Lee, the creative director of Cheil who was responsible for Samsung's football-focused “Galaxy 11: The Training” campaign, said that he felt they were successful because “Unlike most other campaigns using top notch footballers, the Galaxy 11 campaign has created a new entertainment experience based on sci-fi imagination, a football showdown against aliens.” For those interested, the spot can be viewed above (It really is rather spectacular).

Benjamin Hiorns is a freelance writer and musician from Kidderminster in the UK who recently upgraded to 4K and now can't tell the difference between his TV and his window.