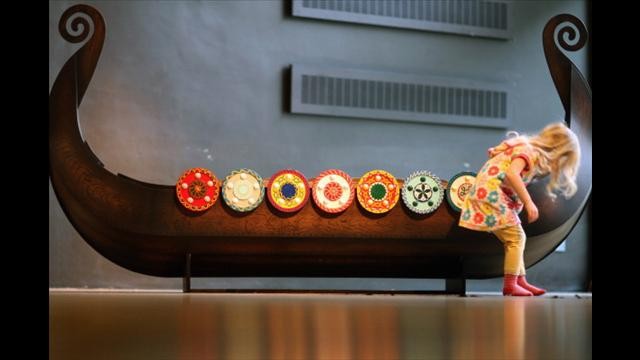 Unless you're getting on a bit, you probably haven't given much thought to what sort of coffin you'd like to be buried in when the time comes. There's a funeral director in Golders Green that displays one in his window with a picture of a Spitfire wrapped all the way round it and with a load of poppy petals fluttering around it, and I remember thinking at the time that it just looked a bit naff. Fair enough, I get that some people (or their relatives, at least) might want a nice coffin made from decent quality wood with some nice velvet lining when they shuffle off their mortal coil. But, not being religious, even that seems to me to be a bit of a waste considering it's either going to be burnt pretty much instantly or eaten by worms. Sorry if that offends, but that's the truth. In fact, my father has already told us that he's quite happy for us to dump him in a dustbin and spend the money on a nice weekend away somewhere instead. But when I was at the Royal Festival Hall over the weekend, I came across the exhibition 'Death: Southbank Centre's Festival for the Living', displaying a truly astonishing array of designer coffins. Some of them made me laugh out loud. Had I missed the point?

Although the designs were not only ingenious and beautifully executed (sorry, bad choice of word), they also appealed to my occasionally wacky sense of humour. If you're a fan of Douglas Adams, you'll know what I mean when I say it reminded me of a dolphin saying, 'So long, and thanks for all the fish'. They could be for people who know what's coming and, rather than seeing that as a reason for mourning the tragic loss of a loved one, instead seeing it as an opportunity to make one final statement about their personality. In this country, I imagine the funerals where these coffins turn up are comparably jolly affairs.

It's more than just a laugh, though. In Ghana, in fact, it is quite the reverse. The concept of constructing fabulously imaginative coffins started in the 1950s as a way of honouring the dead. Ghanaians believe strongly in reincarnation and that the dead hold a powerful influence over the living, so it's in the interests of the living to give the recently departed a darn good send-off. And although burying someone in a coffin shaped like a Mercedes might seem not only funny or bad taste to us, it's of great spiritual importance to them.

The Paa Joe workshop is one of the most respected coffin makers in all of Ghana, following in the footsteps of Kane Kwai â€“ said to be the first coffin maker in Ghana. So famous is Paa Joe's, in fact, that they even have some items in the British Museum's permanent collection. As one might imagine, the design and construction of these coffins is very labour intensive. Each one can take literally months to make. Naturally, the bespoke designs are all hand made at every stage.

Of course, not everybody knows when death might come, so it's more than possible that the corpse is kept 'on ice' at the local morgue throughout the months of design and construction. There's even a recorded example of Paa Joe being asked to design the coffin for a queen of a neighbouring tribe, but, due to the different wishes of two rival factions, they couldn't agree on the design for TWO YEARS. What was the final result? A coffin that was half fish and half chicken. Classy. Let's hope she wasn't a vegetarian.

Closer to home, you can order a bespoke coffin from 'Crazy Coffins' in Nottingham. The Corkscrew below was created in honour of an exhibition they held in Cork, imagining how a wine connoisseur might want to be buried. The cork opens up vertically...so presumably that means the coffin is reverse-screwed into the ground...?

This guitar is my personal favourite:

The undertaker supplied the photograph for this Silver Ghost, which took months to build. After the funeral, the body was laid out in the Rolls-Royce in a conservatory overlooking a garden before being buried in the grounds.

I quite like the idea of the egg, I must admit. Made from solid elm, it's a reincarnation believer's dream, of course. And logistically, you'd probably have to bury the person in question in the foetal position too. Mind you, if my egg looked as beautiful as this â€“ and was as luxuriant inside â€“ I'm not sure I'd want to 'hatch'.

This is Paa Joe's favourite coffin design. The lion is a universal symbol of bravery and strength.

Ghana is a large cocoa producing country, of course, but this is quite an expensive choice for a farmer. Nonetheless, the cocoa pod is still a popular choice, even though it can cost up to three years' worth of wages.

Is that extravagant? Well, yes, maybe. But then what are Egypt's Pyramids but massive tombs? And go into any large church or cathedral in Europe and look at the incredible craftsmanship dedicated to tombs and memorials of the world's great and good (and not so great or good). Death is an expensive business. Presumably, if so inclined, one could go for a Manchester United coffin if that's been your lifelong love. Where does one draw the line at taste when it comes to death? A John Lennon or Elvis coffin might be somewhere towards it. But frankly, I wouldn't be surprised if that had happened already.