Oscar Pop: The 2020 Academy Awards through a Shutterstock lens

With the 2020 Oscars right around the corner, Shutterstock has just officially unveiled its latest Oscar Pop! poster series. A tradition among Shutterstock’s design team, the series combines the vibrant and sometimes playful colours, styles and techniques of leading pop artists (like David Hockney) to offer fresh and unexpected perspectives on this year’s Best Picture nominees.

So, without further ado, here are the nominees this year:- 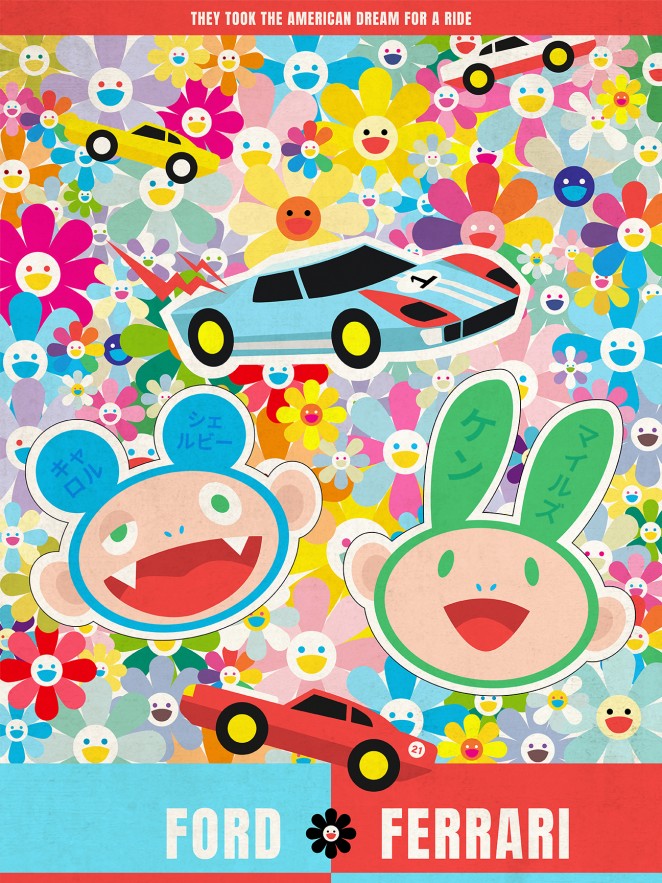 In my poster, I explored friendly competition using Takashi Murakami's vibrant colouring and iconic humanlike flowers, playfully juxtaposing the serious with the pursuit of the exciting and fun. 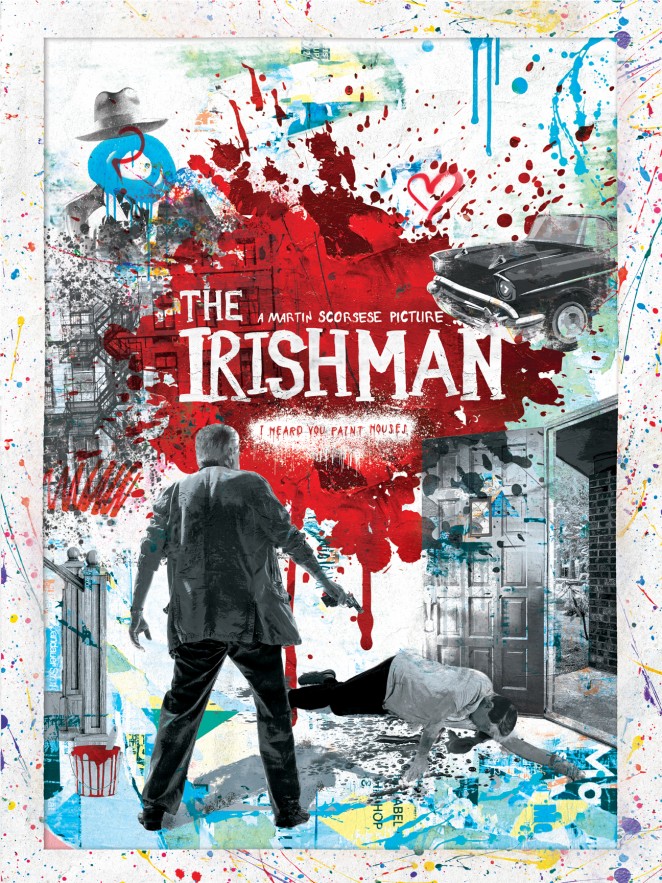 The Irishman is a true crime story about the disappearance of Jimmy Hoffa, arguably the most influential labor leader of the 20th century. To this day, the mystery hasn’t been solved. At its core, the story revolves around the hard decisions that people must make for friendship.

My poster was inspired by street artist Thierry Guetta, best known as Mr. Brainwash. Playing with the contrasts of paint dripping that’s characteristic of his work, and the moody atmosphere of the movie, I wanted to express the chaotic nature of the story in a style typical of Guetta. Also—spoiler alert—I left the door open. 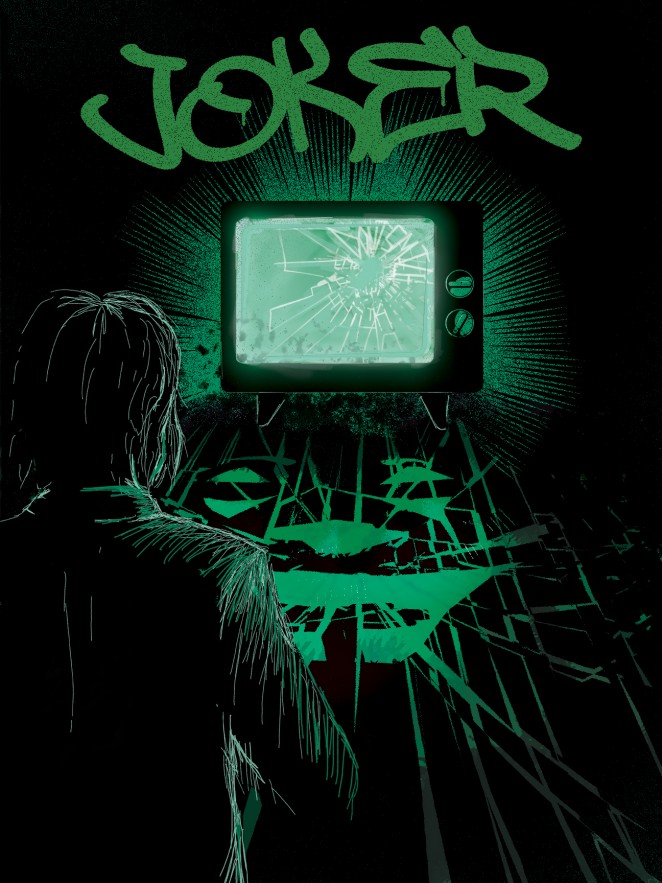 Joker follows Arthur Fleck as he lives his day-to-day life. Society seems to fail him over and over again, which slowly blurs his understanding of fantasy versus reality. I chose Daniel Norris as my inspiration for this poster because in his work there’s always a central focus, but the more you look, the more hidden elements you find.

I wanted a challenge, so, like Norris, I also limited the color palette and showed the Joker without revealing his iconic face. 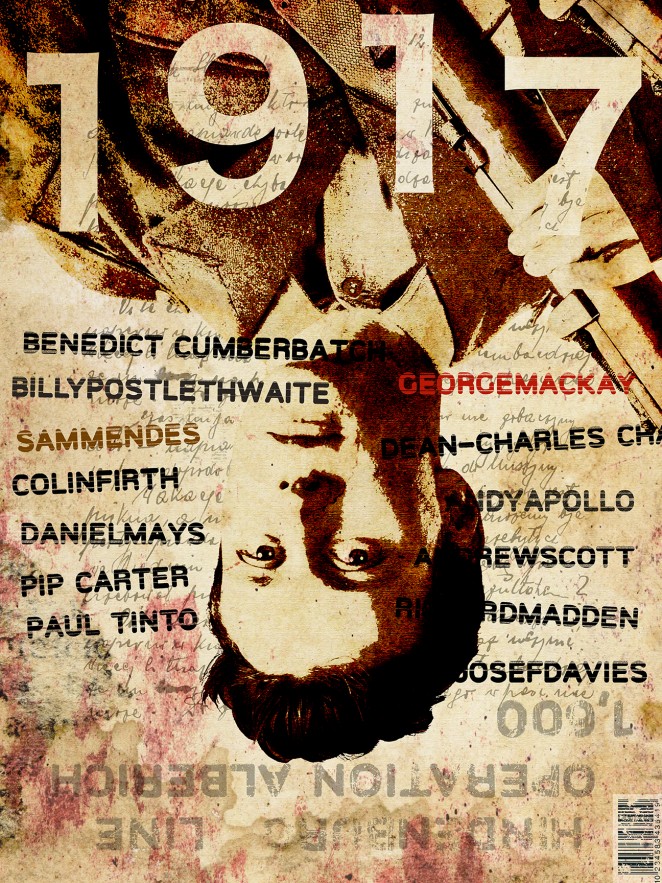 1917 is a World War I film by Sam Mendes. It chronicles the journey of two young British soldiers tasked with delivering an urgent message on the frontlines. I was inspired by David Carson, an American graphic designer, art director, and surfer.

He is best known for his innovative magazine design and use of experimental typography on Ray Gun magazine. His aesthetic defined the so-called "grunge typography" era. I decided to use Carson's layered, chaotic style to depict the "fog of war" and how planning and order go out the window in battle. 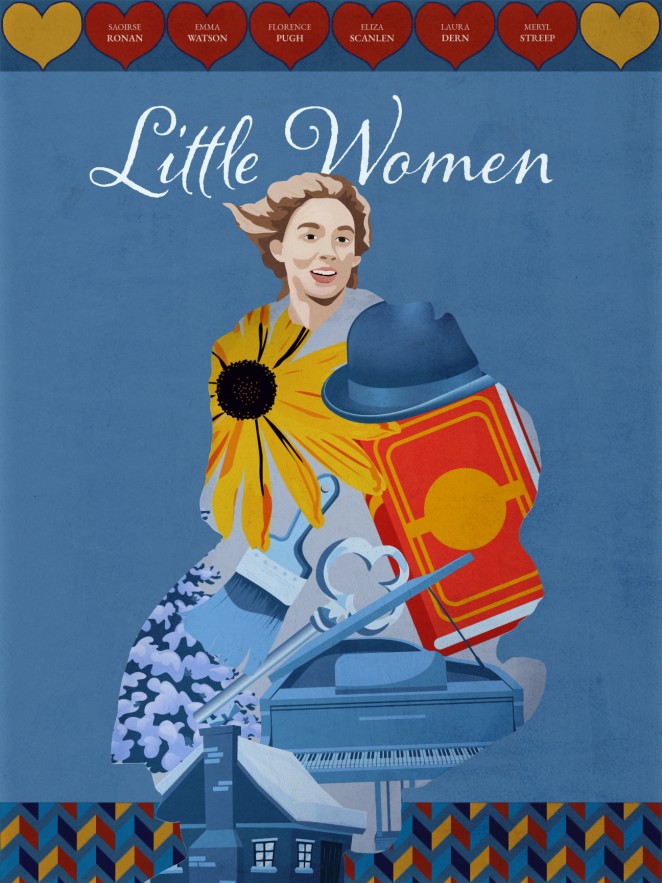 Little Women is a period drama that focuses on the story of four sisters in the Civil War era. Jo March wrote the book reflecting on the relationships and events in her own family. To celebrate the feminist spirit and joyful mood of this film adaptation, I chose Pauline Boty’s style as my inspiration for the poster.

Her colourful collage work was always tied to womanhood and the distinct female point of view. Illustrated in this design are several iconic items to represent the sisters, from the piano to the paintbrush to the book.

Once Upon a Time in Hollywood - Ian Calleja 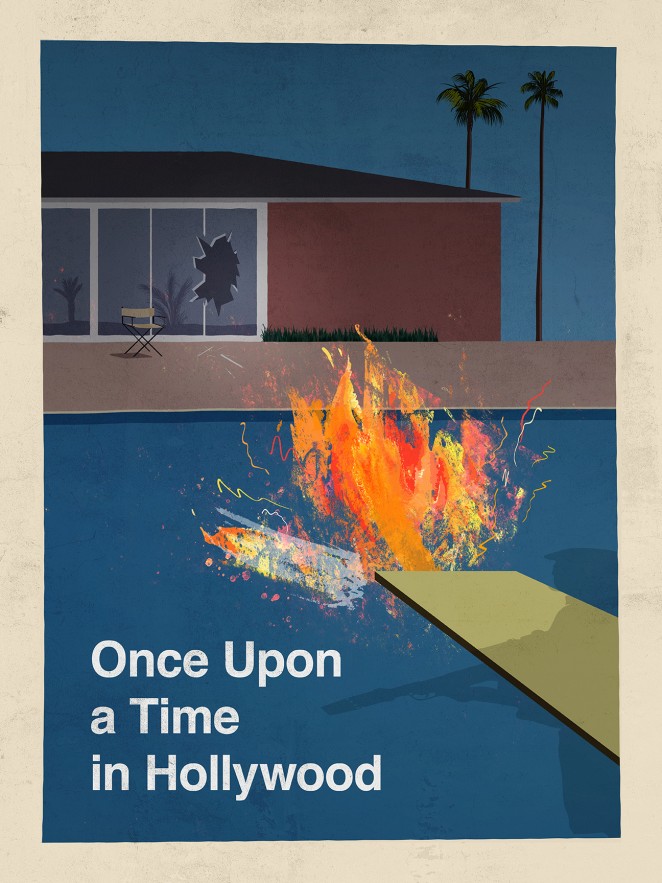 Based on one of David Hockney’s most famous paintings, I gave a not-so-gentle nod to the final act in Once Upon a Time in Hollywood. Hockney painted ‘A bigger splash’ in 1967, just two years prior to the infamous Tate-LaBianca murders and the alternate history version presented by Tarantino.

The poster links the film and painting further through mid-century architecture that serves as a backdrop in each. Secondary storytelling elements from the scene, like the broken window or shadow of DiCaprio’s character, are meant to draw the viewer closer and add a layer of intrigue. The poster uses over 20 illustrations, vectors, and textures from Shutterstock’s collection. 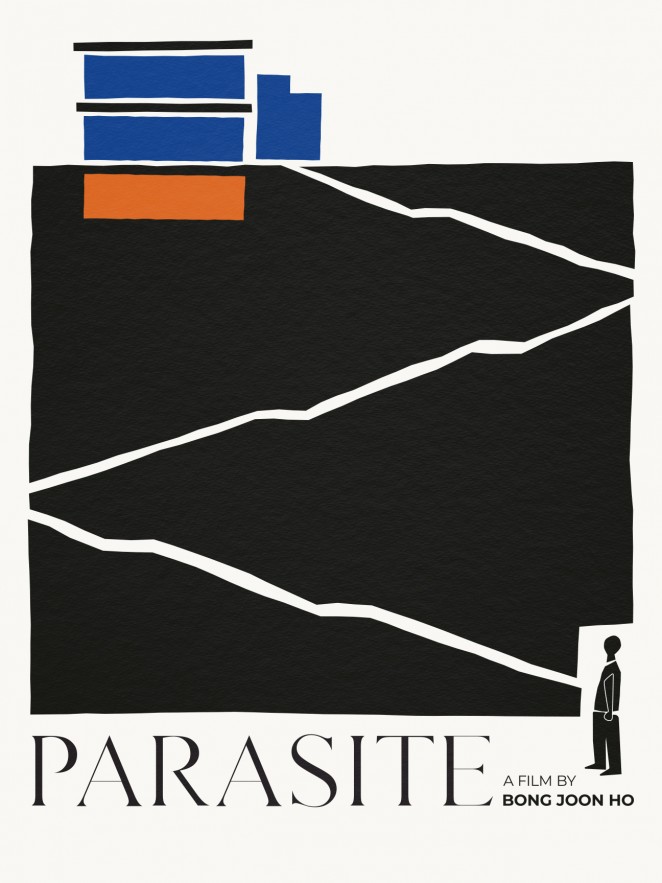 Parasite is a dark comedy-thriller about rich and poor families. This poster is inspired by Saul Bass’s simple but symbolic movie poster designs that transformed the visuals of film advertising.

Among the numerous motifs used in the movie, I picked the staircases that appear almost every few minutes to represent the positions of the two families and the gap between the rich and the poor. As Ki-woo peers out the window of the basement while writing to his father, he sees the staircases and has hope. But is there really hope? 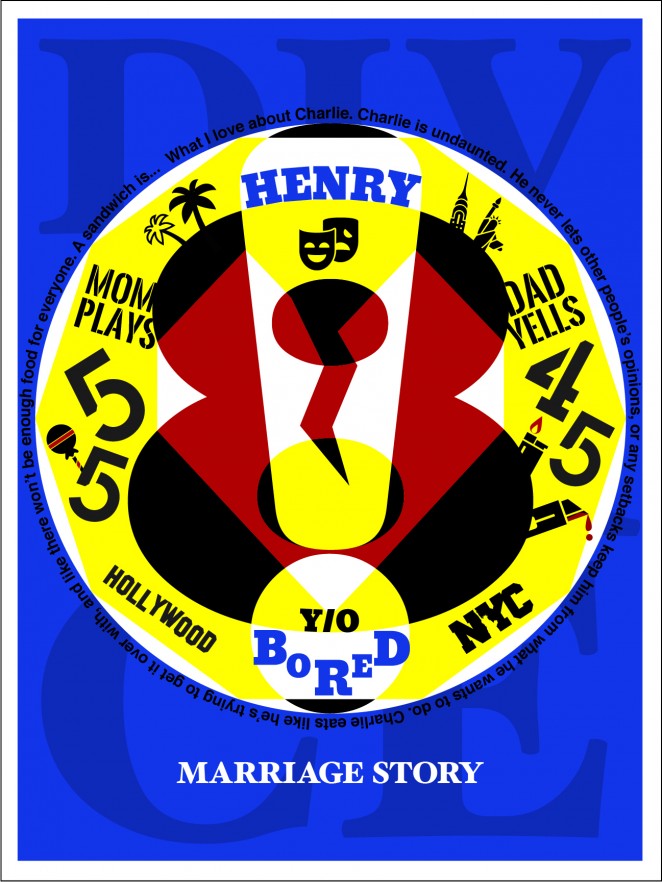 Marriage Story presents the emotional struggles of a couple during their divorce and custody battle. I wanted to create this poster from the perspective of their son, Henry. It’s in the style of Robert Indiana, best known for his LOVE sculpture, who grew up in a family of divorce and illustrated events from his life in his Decade Autoportrait series. His family background and his bold, simple typography make the Autoportrait series the perfect inspiration for my movie poster.

I used Henry’s age, eight, an exclamation mark, and a broken heart as the main focus of the poster while adding multiple icons and types to illustrate key parts of the movie. Surrounding these elements, I added the letter—written by his mother—which Henry reads to his father at the end of the movie. 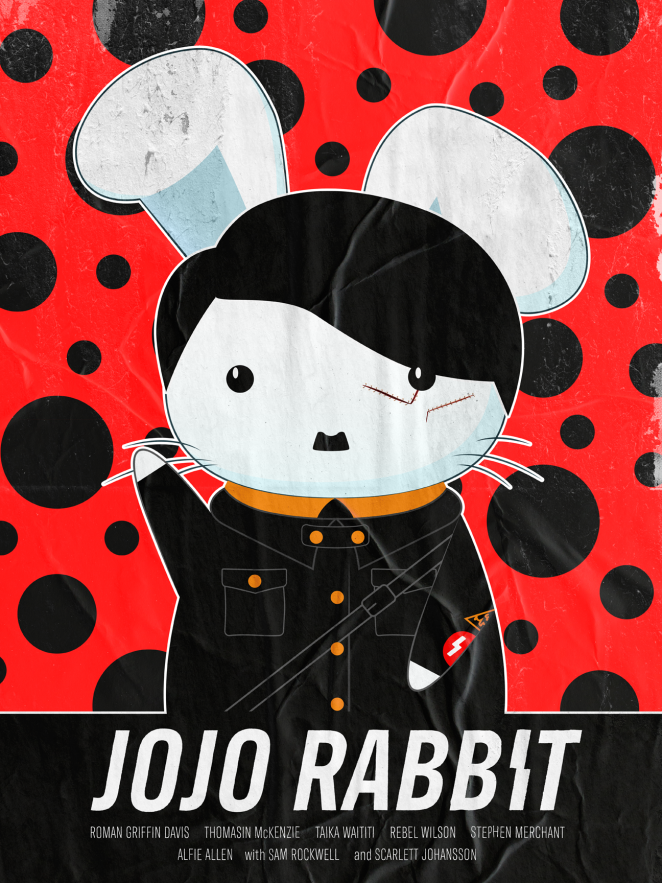 Jojo Rabbit is the coming-of-age story of a lonely German boy who must confront his own Nazi fanaticism (his imaginary friend is none other than Hitler himself) when he develops a friendship with Elsa, a Jewish girl who is hiding in his attic.

Just like Jojo, Yayoi Kusama’s difficult childhood and personal obsessions are important factors that made her who she is today. The infinite repetition in Yayoi Kusama’s art and the bright oversaturated colours fuelled by hallucinations and phobias draw distinct parallels to Jojo’s experience in the film.