In 2014, Air Max Day was introduced by Nike to celebrate the Air Max and its vast history. It falls on March 26th every year, but this year was a particularly special one, as the Air Max officially turned 30, and to mark this auspicious occasion, there were a number of activations taking place across the globe. Here are a few of the more worthy and creative events and ideas that Nike and their partners had in store for us this year. 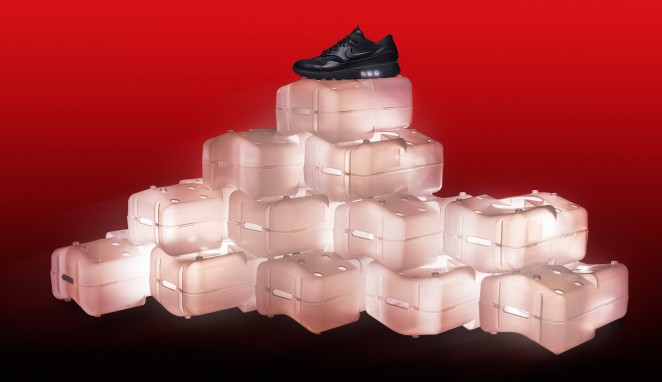 Nike partnered with Taiwanese architect and engineer Arthur Huang to design sustainable and responsible Air Max packaging made from recycled drink containers and lids. The lightweight shoebox, which was released for Air Max Day this year, is made to neatly interlock for stacking or display and is created using plastics derived from leftover consumer packaging and is manufactured with no added chemicals. The top of the box splits diagonally in half, with a central section that keeps the shoes in one place. Extra holes in the packaging allow owners to thread rope through and re-use the box as a backpack or carry bag. It can also be recycled. 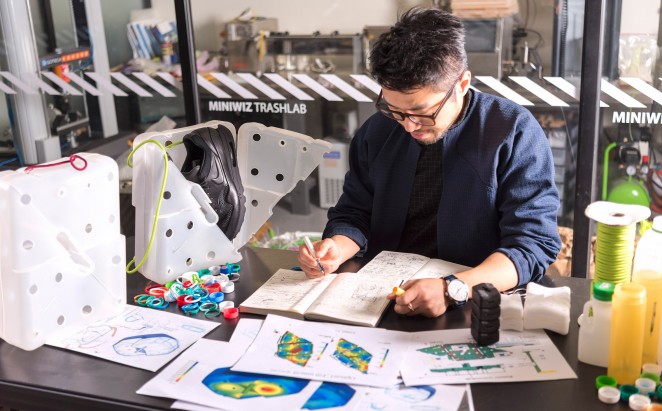 Huang, who is CEO of Miniwiz, a Taiwan and Berlin-based studio dedicated to finding new uses for waste, and reducing the impact of materials on the environment, said of his creation: “We're adding features and efficiency to an existing product and by re-using non-virgin materials in a sustainable and responsible way. What we do here is very simple, we try to use the stuff we throw away and turn that into the most sustainable way with the least carbon footprint to create a new product. It's all about turning pollution into a solution for the future.” The packaging is made specifically for the Air Max Royal 01, which Huang himself also designed. The shoes (which are also made only from recycled materials and are said to be the lightest ever Air Max 1) were unveiled in New York earlier in the year, alongside designs by Marc Newson and Riccardo Tisci. 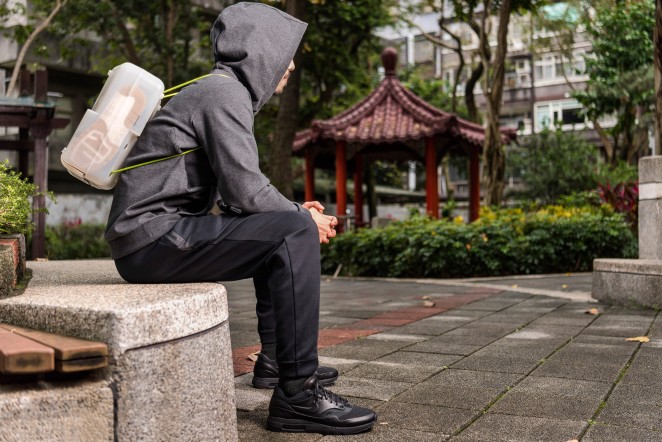 2017 is not only the 30th birthday for the Air Max, but also for Wieden+Kennedy's relationship with them, as the first TV and print ads for the Air Max 1 (called “Revolution”) were actually created by Wieden+Kennedy Portland back in 1987. To celebrate this special year, the designers of Wieden+Kennedy London created an installation of 30 bespoke fly-posters, pasted up on the Truman Brewery Wall, Hanbury Street, from Friday 24th March in time for Air Max Day on Sunday 26th. The design team at W+K said: “We wanted the posters to feel bold, energetic and capture a sense of the revolutionary. Our nod to the shoe that started it all 30 years ago.”

To create the Air Max Day project, the design team at Wieden+Kennedy London ran two workshops. The first started with designers sketching the Air Max 1. They then took scissors to classic Futura Bold Condensed typeface and reworked them into a stencilised bespoke cut, that reflected our observations of the shoe’s design. This resulted in a full alphabet of Air Max Inspired letters. The second workshop involved taking those letters into 30 individual posters, which together would form this sentence: “One small step for man, one giant JUMP, CRUNCH, BOUNCE, SKIP, SHUFFLE, SQUEAK, SWEEP, SLAM, KICK, FLICK, SPRINT, TRIP, STAMP, BEND, LUNGE, SPROIOIOIOIOIOING, WHAAA?, HOP, TAP, DASH, ZIP, BEEP BEEP, VAULT, FLOP, LEAP, FOR MANKIND. Happy 30th, AIR MAX. Love, Wieden+Kennedy.” The posters are currently being pasted up on the Truman Brewery Wall and are also showcased on Instagram.

XYZ and Hotel open “ON AIR” collaborative space in London 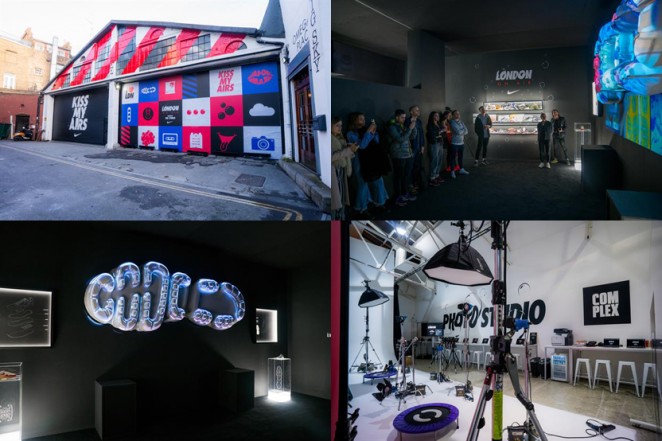 Nike welcomed more than 650 people into The Studio in King's Cross in the lead up to Air Max Day over the weekend to work with industry leading mentors in the fields of music production, photography and interactive design. The space hosted a series of workshops aimed at inspiring and fostering young creative talent, with the mentors that ran the workshops selected because they are pushing the boundaries of the fields they work in. Brand experience agency XYZ managed event production, while Hotel was the creative agency on the project. The Studio's mentors included illustrator Alice Stewart, video artist Natalia Stuyk, photographers Joseph Hayes and Olly Burn, alongside representatives from Radar Radio. The mentors called on the heritage and innovation of Nike Air Max to teach the attendees new skills and help them to create work inspired by the Nike VaporMax. 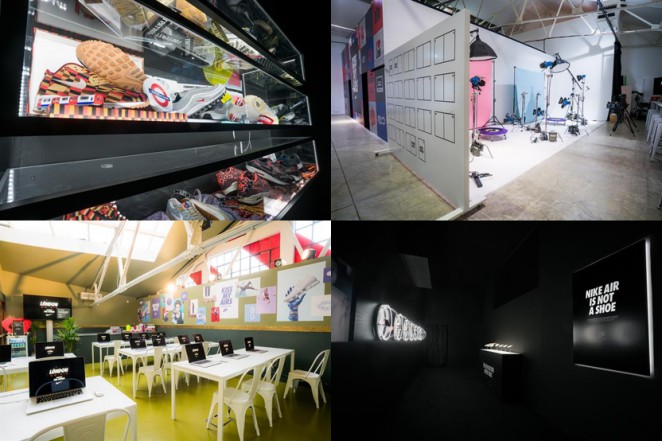 A beginner interactive design workshop was run by Hackney-based video artist Natalia Stuyk who taught participants how to produce animations that capture light, air and movement in a new way. The intermediate level workshops hosted by Alice Stewart, who’s internet-driven illustration gave participants a whole new perspective on how they interact with the screen. The beginner level photography workshop was led by Olly Burn, a North Londoner who’s work focuses on capturing the authenticity and the spirit of his subject. His workshop gave participants a chance to shoot outside as well as experiment in the studio. The intermediate workshop was taught by The Illusion of Depth (Joseph Hayes), who’s experimental approach taught the participants how to make their own 3D GIF. The music production workshops were run by Radar Radio, the London-based radio station and studio that champions the next generation of London’s talent. These sessions taught visitors about the the foundations of music production, as well as getting the chance to work and collaborate with special guest mentors. 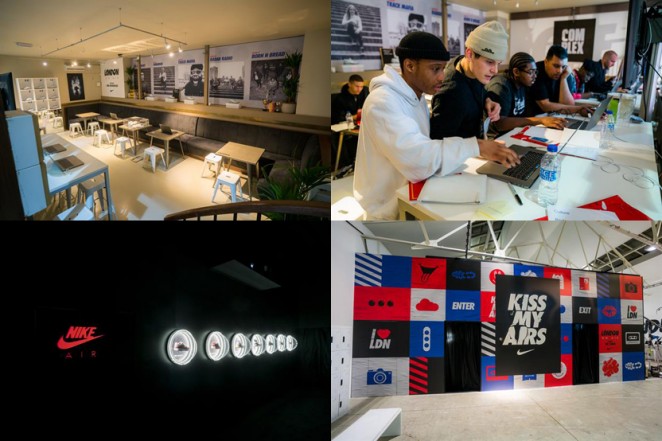