Modern staircases are very rarely built to inspire awe or act as conversation pieces. Indeed, we're growing so lazy and indifferent as a species that we rarely take the stairs anymore, especially when there are more convenient options available. History, however, is littered with gorgeous staircases. From the 'impossible' seashell staircase at Hartenfels Castle in Germany, to the Guggenheim Museum in New York and the countless Art Déco constructions of the 1930s, we have seen so many staircases built not only to act as a means of getting from A to B, but as genuine artistic statements in their own right.

Hoping to revive a little of that magic is the Dutch architecture and urban design company MVRDV, who recently revealed the first photographs of “The Stairs,” a gigantic scaffolding staircase leading up to the roof of an office block in Rotterdam city centre. As the latest of several exciting new additions to the city, the temporary installation allows visitors to climb 180 steps up to the roof of the Groot Handelsgebouw, which was one of the first buildings constructed in the city after the end of the second world war.

Measuring 29 metres high and 57 metres long, The Stairs leads up to a rooftop observation deck where visitors will also find a venue for film screening and events, located inside the former 1960s Kriterion Cinema. MVRDV believe that the project is the first step (chortle chortle) in creating a new network of rooftop spaces around the city, all linked by staircases and escalators. A symbolic first step towards a better use of they city's skyline.

“It is, in this way, a second reconstruction that gives access to, activates and connects the rooftops of Rotterdam”

The project marks 75 years since Rotterdam began its post-war reconstruction and pays tribute to the radical architecture that has been built since, such as Piet Blom's Cube Houses, built in 1977, and Marcel Breuer's De Bijenkorf department store, which was finished in 1957. It follows on from a recent surge in architectural innovation in the city, with new projects including MVRDV's market hall and the De Rotterdam 'vertical city' by OMA. An exhibition is also being held alongside the installation, reimagining how other buildings in the city can accommodate rooftop activities.

MVRDV Co-founder, Winy Maas, said of the project: “With this installation and in our exhibition we show what this city could look like if we do that in many places, engaging a series of our existing buildings and giving access to their roofs, to create a new, much more interactive, three dimensional and denser urban topography for the next city generation.” Maas co-founded Rotterdam-based MVRDV in 1993 with Nathalie de Vries and Jacob van Rijs. The firm's completed projects include a library contained within a glass pyramid and a shop and office complex disguised as an old farmhouse. The firm is also working on another project in Rotterdam; a bowl-shaped art depot for the Museum Boijmans Van Beuningen with a mirrored exterior and a rooftop sculpture garden.

The Stairs was officially opened on Monday morning (May 16) by Rotterdam mayor Ahmed Aboutale, and will remain in place until 12 June. It is located next to another of the city's new structures; the railway station by Benthem Crouwel, MVSA and West 8. It is also near the Lucht Café, which offers up refreshments to tired climbers and casual observers alike. 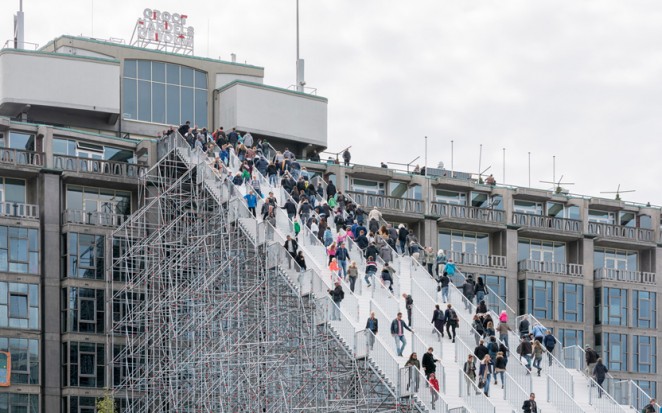 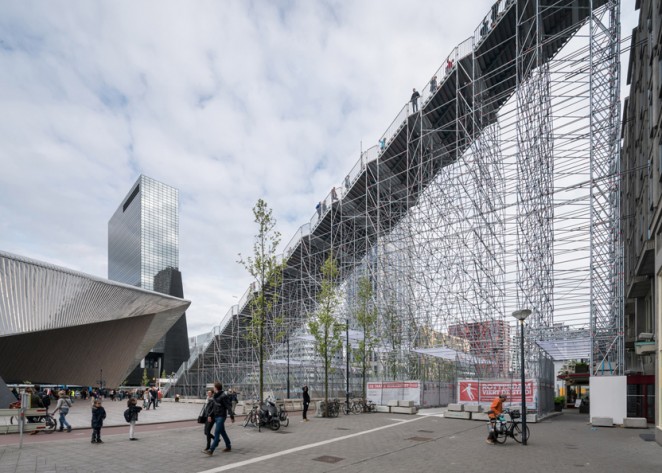 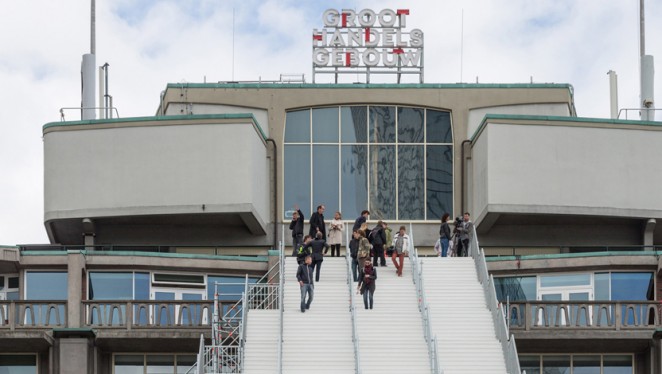 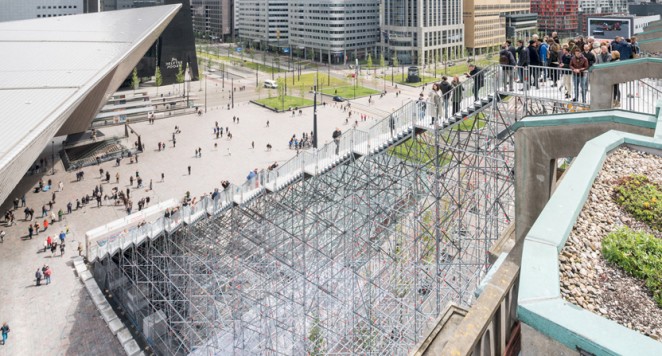