A team from MIT has won an ambitious competition to design a levitating travel capsule for the Hyperloop; billionaire Tesla Motors entrepreneur Elon Musk's futuristic, high-speed transport network. MIT's design was announced as the winner of the SpaceX competition at Texas A&M University over the weekend. The team beat 99 other groups from around the world, who all presented their conceptual designs for Hyperloop transport pods over the course of the weekend. Weighing in at only 250 kilograms, the MIT pod could potentially travel up to 245 miles per hour through Hyperloop's elevated tunnels using magnetic propulsion.

“The beauty of the system we designed is that it's completely passive, an elegant property that will make our pod very scalable”

First proposed by Musk in 2013, the Hyperloop system would consist of a network of tubes, with passengers propelled in computer-automated, levitating capsules drawn by powerful magnets and vacuums. Imagine the travel tubes from Futurama and you're about half way there. A company has since been set up to realise the idea without Musk's direct involvement, but the competition for the pods was organised by Musk's own SpaceX company to help accelerate development of a functional prototype.

The MIT team comprises students and faculty from the fields of aeronautics, mechanical engineering, electrical engineering and business management. Their pod's tubular shell is made of woven carbon fibre and polycarbonate sheets. Measuring roughly 2.5 metres in length and one metre in width (eight by three feet), the pod has a simple frame of large welded-aluminium rails that support the main internal components. The strongest type of commercially available magnets, called neodymium magnets, would enable it to levitate above the Hyperloop track. The team also devised systems to keep the pod centred on the track, and able to traverse variations along its length. The driverless pod will feature a modular electronics system that enables autonomous flight control and braking. A fail-safe braking system causes the pod to stop on its own if the motors or computers fail.

Team captain Philippe Kirschen, a master's student in aeronautics and astronautics, said: “MIT has been involved in so many technological breakthroughs in the past century. It just makes sense we would help advance what might be the future of transportation. The beauty of the system we designed is that it's completely passive, an elegant property that will make our pod very scalable. In case of emergency, the pod will also be capable of driving itself forwards or backwards at one metre per second using the pod's low-speed drive wheels.” The MIT team aims to build a small-scale prototype of its design and test it on the track this summer. Although MIT won the competition, the top five will all have the chance to make prototypes, which will be tested on the Hyperloop test track before a final competition day this summer. Delft University of Technology from the Netherlands were second, the University of Wisconsin third, Virginia Tech fourth and the University of California, Irvine, fifth. 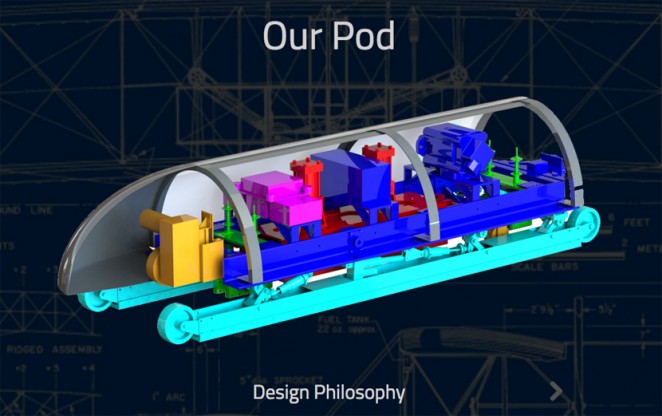 Work on a Hyperloop test track began last November in Quay Valley, a proposed solar-powered city in Kings County, California. The area is home to the headquarters for SpaceX, or Space Exploration Technologies Corporation, which Elon Musk founded in 2002. He first proposed Hyperloop as a supersonic transport system to link Los Angeles and San Francisco in just 30 minutes. The billionaire, who also owns electric car company Tesla, believes the network could potentially be built within the next decade.